Another short week, thanks to Mrs. Teebore's absence and the end of February sweeps, so the networks are safe to go back to scheduling new episodes intermittently until May. I am about three episodes from the end of Last Resort (which is really picking up some plot momentum as it goes along; I'm enjoying it) and finally finished the first season of Revenge, and started the second.

Anyways, here's some newer stuff I did watch this week. 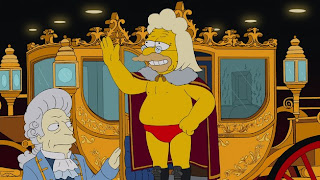 Someone on the writing staff must really like Grampa. In just a few months this season, we've got one episode that revealed he used to be a lounge singer married to a heroin addict, and now we've leaned he also used to be a famous professional wrestler. While it's never a good idea to get too worked up about continuity when it comes to this show (and nothing in this episode overtly contradicted this), when Mr. Burns was trying to convince Grampa to wrestle once again, I couldn't help but recall the time we learned the pair had been in the same company in World War II, and then Mr. Burns tried to kill Grampa to get the Hellfish bonanza for himself. Seems like something that would have been worth mentioning.

For the record, the first time I'd ever seen any version of the Harlem Shake was this episode's couch gag, because I am an old man.


Bob's Burgers: O.T. the Outside Toilet 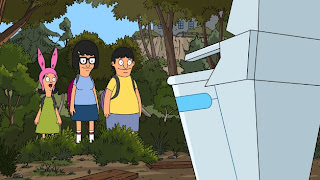 I'm not the world's biggest E.T. fan, but there's no denying that swapping in an advanced, talking toilet for the alien wouldn't have improved things, and perfectly fits the aesthetic of this show. Gene's affection for the toilet (he's apparently prone to developing attachments to inanimate objects) was genuinely touching. And the B-plot was just as good, with Bob discovering new doors opening to him as a result of a sharp new suit, and then him and Linda getting so drunk they forgot to eat dinner.

Other Thoughts
Gene's repeated failure to hang onto a flour sack baby was a brilliant bit of physical comedy. Just absolutely hilarious.

The whole bit with Teddy thinking Bob's name is "Bob Burgers" because that's what it says on the window, was also fantastic.

The ease with which this episode was able to work in some of the recurring kid characters like Andy and Ollie is another of the show's strengths.

Jon Hamm provided the voice of the toilet and did, not surprisingly, a great job with it.

Louise: Everyone know what they're doing?
Tina: In general or in the plan?
Louise: The plan, Tina.
Tina: Phew.

Bob: It's not easy to take care of things. I mean, one time when you were a baby, you ate a fern, and you could have died. But you didn't.
Gene: Huh.


Parks and Recreation: Ben and Leslie
As I mentioned last week, this episode and the previous one were written as a potential series finale for the show, had it not received a back nine order and/or been cancelled. And while I'm certainly glad the show will be continuing (I've already got more episodes to watch on my DVR), there's no denying this would have been a sublime final episode for the series. If the previous episode served as a goodbye to the show from a plot perspective, offering one last seemingly-impossible task for the characters to overcome, this episode functioned as a goodbye to the characters themselves. Everyone got a moment to shine, either dramatically, comedically, or both, and, fittingly enough, Leslie stood at the center of it all. It was heartwarming and hilarious, from top to bottom. Thankfully, it's both not the final episode of the series and a superb episode nonetheless.

Other Thoughts
Amongst my favorite bits: Andy's glee at knowing someone who works for the city that can get a marriage license, Ann's assertion that all the whacky hijinks Leslie has put her through have been leading to this, Ron's handmade rings (buying things is for suckers), the scene between Ron and Leslie outside the parks department and the surprisingly touching scene between Chris and Ben, Ben's vows, and Ben and Leslie walking backwards towards each throughout the episode, calling out their dorky codenames, so as to not see one another before their wedding, which was pretty much a perfect encapsulation of their characters.

How utterly appropriate was it that Leslie got married inside the parks department? You almost wonder why she didn't think of that. 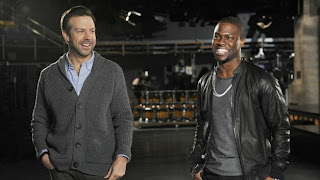 This was a weird episode. Kevin Hart was in nearly every sketch, and he brought a crazy energy to every one. Sometimes that energy helped elevate a poor sketch, and sometimes it was completely let down by the material. There were also several shorter-than-usual sketches, and a recycled commercial, suggesting there were some kind of timing issues with the performance. Just a weird night all around.

Other Thoughts
It's rare that I have to do it, but this was an episode that, once it started, I had to get out my phone and look up the host on IMDB, because I had no idea who Kevin Hart was (musical guests, on the other hand, I rarely recognize, because I am musically unhip. Though I do know "Thrift Shop", thanks to my wife).

Another strong cold open. The Village People gag was great, but I also enjoyed the inner city schoolteacher who was pleased to be losing her job ("This is greatest day of my entire life. Good luck reading Beowulf, you monsters.”).

A strong Weekend Update as well. Even though Kevin Hart had some issues with it, the "Really?!?" segment had some great material in it.

Quvenzhane Wallis as the pope amused me more than it probably should have.

That the snarky employees bit is apparently recurring surprised me (because it's not very good), but, as a former longtime Barnes and Noble employee, I was far too distracted by all the little details they got wrong to care much (they don't wear uniforms, the name tags don't look like that, and the shelves wouldn't be labeled like they were). Yes, I understand the goal was just to evoke the image of Barnes and Noble, not get it all right, but what can I say?

The Walking Dead sketch was okay. Lord knows there's plenty to make fun of there, especially when it comes to race, but they went the obvious route. I did enjoy Nasim Pedrad's soulless Carl, though.

The Z shirts sketch was mildly amusing, until the gag surprisingly popped up again later in a seemingly unrelated sketch, at which point it became much, much funnier. I don't know that I've ever seen anything like that on SNL before.

Least Favorite Sketch: Maybe it would be funnier if I watched the show, but the Shark Tank sketch was pretty awful, one of the times Hart's manic energy made things worse instead of better because it seemed so out of place.

Favorite Sketch: Well, the "Really?!?" segment was my favorite of the night, but if you want a legitimate sketch, I'll go with Z shirts.