In a Nutshell
The New Mutants are attacked by Sentinels

Plot
Dani races through the Danger Room, pursued by a monstrous creature. She climbs a cliffside to escape it, hoping to reach an exit, but suddenly she encounters a Brood. Recoiling, she falls off the cliff and is knocked unconscious. Meanwhile, at the Salem Center Mall, the New Mutants and Stevie Hunter emerge from a movie. The kids mingle with some students from the local public school, unknowingly watched by Project: Wideawake. Henry Gyrich and Sebastian Shaw examine the new model of Sentinels Shaw has built, but Gyrich insists he won't need them in order to capture the New Mutants. Shaw, however, secretly wants to heighten the New Mutants fear of humans. At the mall, Stevie is accosted by Colonel Michael Rossi, telling her she'll need his help. Government agents arrive to arrest the New Mutants, and uncertain what to do, Shan tells her teammates to go along peacefully.

In the parking ramp, Rossi and Stevie intervene, and a fight breaks out. One of the agents radios in the attack, initiating a contingency plan. As the New Mutants easily overpower the agents, a Sentinel crashes through the roof, quickly joined by two others. With Rossi's help, the New Mutants are able to hold their own against the robots, eventually destroying all three. As the police arrive, Shan possessed the lead agent, forcing him to confess that he works for the NSA and summoned the Sentinels. Arriving at the mansion, the New Mutants awaken Dani, and she tells them she was attacked outside the Danger Room and placed inside with the scenario running. Stevie realizes, with Moira gone and the students with her, the only person left in the mansion had been Professor X.

Firsts and Other Notables
The Sentinels re-appear following X-Men #152, though technically this is the first appearance of the Mark V Sentinels. They are the only models to eschew the traditional Sentinel pink/purple color scheme for blue, and I don't believe this particular model ever appears outside this issue. 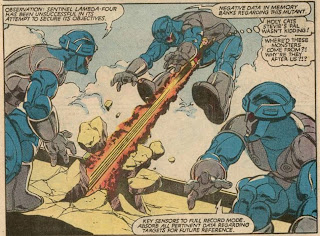 Sebastian Shaw also pops up again, his first appearance since X-Men #152. His company is responsible for the creation of the Mark V Sentinels, and Shaw notes that he intends to use them to make the New Mutants fear humans and only trust their own kind, so that when the Hellfire Club eventually destroys Xavier, the New Mutants will be more inclined to join the Club. 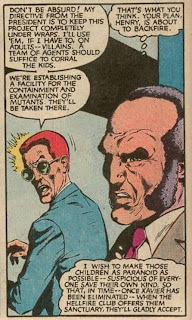 In the Danger Room, Dani is confronted by a Brood (though she doesn't know that's what it is), who says only Dani has sensed her presence and can destroy her. Later, the issue closes with the reveal that, like the X-Men, Professor X has a Brood egg implanted inside him as well (chronologically-speaking, this will be revealed in X-Men #166). 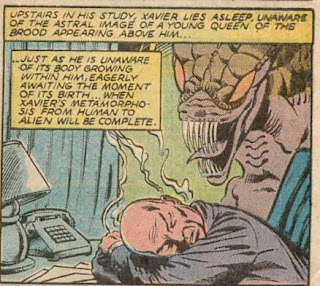 Air Force intelligence agent Colonel Michael Rossi, believed dead following X-Men #96 (when he threatened to pull the plug on Stephen Lang's mutant hunting program), re-appears, saying the world believing him dead has served him well. The backup story in Classic X-Men #7 will reveal that he survived his plane crashing, and his knowledge of Lang's involvement with the Council of the Chosen, the precursor to the Hellfire Club's Inner Circle, led to Sebastian Shaw's overthrow of the Council and rise to power. Stevie mentions she's heard his name from Xavier and Carol Danvers; we'll eventually learn he has a history with both Carol and Wolverine (stemming from the incident with the KGB referenced in X-Men #163). Rossi will pop up occasionally over the next few years, working as an agent of Xavier's, before disappearing into the background again. 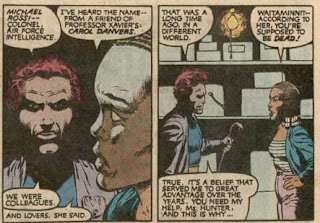 Shaw mentions that Roberto's father Emmanuel is a member of the Hellfire Club, though not of it's Inner Circle, and Shaw considers recruiting him, kicking off a subplot that will run, mostly in the background, sight unseen, throughout the rest of the run of New Mutants. 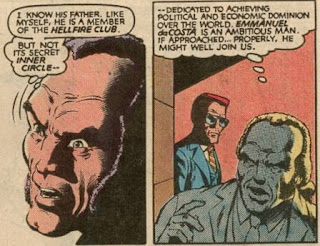 A Work in Progress
A readout from Project: Wideawake lists everyone except Dani's age, though later stories will reveal that Rahne's age is wrong, as she's considered the youngest member of the team.

While hanging out with the local kids, it's made clear that Rahne's name is pronounced like "rain". The New Mutants also get some grief for being "elite" private school kids who rarely mingle with the "common folk".

Shan notes that, as the oldest of the New Mutants, she is their de facto leader.

It's established that when Sunspot is powered up, he gains a certain amount of physical resiliency along with his super strength.

To her credit, by the time the Sentinels start trashing the mall, Stevie realizes she's in over her head. 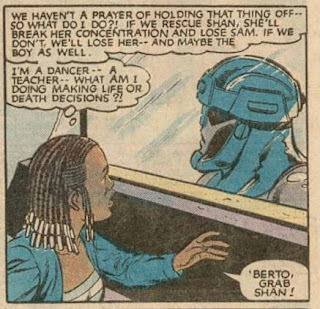 I Love the 80s
The New Mutants see ET. It is the first movie Rahne has ever seen.

Thinking her name is "Rain", one of the local girls compares Rahne to Moon Unit Zappa, Frank Zappa's daughter, and asks if she's punk or new wave. 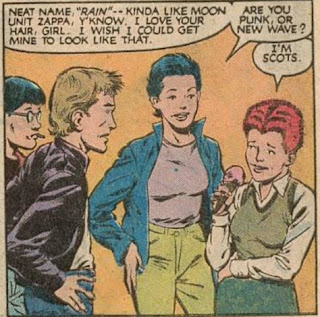 Amongst other things, Gyrich is worried that the Soviets might have mutants of their own to use against the US.

When Stevie calls the mansion and no one answers, she finds it odd that Professor X would leave without turning on the "recordacall system", which is either a fake comic book-y name for an answering machine, or a specific device with which I am unfamiliar.

Claremontisms
A thought bubble shows Dani thinking "I think --  I hope -- I pray" that she's safe, the think/hope/pray progression being a favorite construction of Claremont's.

Human/Mutant Relations
This issue gives us our first real look at Project: Wideawake since its first mention in X-Men #142. Gyrich is convinced that mutants pose a threat to humanity, and is determined to round them up for containment and examination in order to learn more about them. 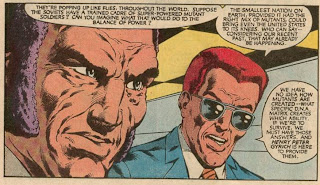 Teebore's Take
This issue effectively serves to introduce the idea of human prejudice against mutants to the series. While plenty of readers were likely coming to this series from X-Men, it's also not hard to imagine plenty of first time readers being drawn to a new title featuring teenaged characters. To that end, Claremont establishes the idea that mutants are feared and hated by some humans, and distrusted by the government, by having the New Mutants tussle first with some government agents, and then with that ever-reliable villain of mutant oppression, the Sentinels (and, just to keep all the players on the field, Claremont is sure to point out that the Sentinels, though built for future use by the government, were in this case deployed by an evil mutant).

The Sentinel attack in this issue also serves as an example of how Claremont can balance the idea that the New Mutants aren't superheroes with the conventions of the genre: here, the characters aren't looking for trouble, aren't being sent out on a mission, but rather, stumble into some traditional superhero action when their trip to the mall is co-opted by government agents. Thus, we get our superhero fights while still allowing the book to stay true to its "students first" aesthetic. It's a technique (trouble finding the New Mutants when they're not looking for it) that runs the risk of becoming tiresome and/or laughably unrealistic, but for now, it's effective.

Next Issue
In Uncanny X-Men #165, the X-Men take the fight to the Brood, while in New Mutants #3, the Brood inside Xavier makes its move.
Newer Post Older Post Home
Posted by Austin Gorton at 8:00 AM