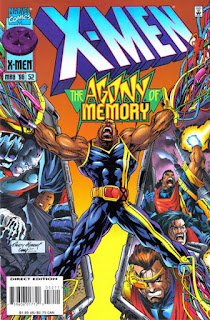 In a Nutshell
Gambit, Bishop and (Dark) Beast stop the mutant train but are captured by Mister Sinister.

Plot
Trying to stop a runaway commuter train filled with passengers infected by a virus mutating their genetics, Gambit charges up the train with kinetic energy, then advises Bishop to absorb that energy and re-channel it; the resulting kinetic backlash brings the train to a stop. However, the X-Men, including Beast, are knocked out by Mister Sinister. Meanwhile, Rogue rents an apartment in South Carolina, hoping to start a new life away from the X-Men. Back at the site of the train incident, local investigators have their evidence confiscated by the mysterious Bastion. In Sinister's lab, Beast awakens to find himself restrained. Sinister tells the captive X-Men the effects of the virus are temporary, then turns his attention to Bishop, who, hailing from the future, isn't part of Sinister's vast collection of mutant DNA. As he proceeds to examine Bishop's memories, Beast (who is actually Dark Beast in disguise) becomes terrified that Sinister will discover him. However, Gambit is able to escape and free sBishop & Beast, and in the ensuing fight, Sinister is chased away as his work on the virus is destroyed. The X-Men emerge from Sinister's lab, which Gambit recognizes as being outside St. Louis, prompting Dark Beast to suspect Gambit & Sinister shares some secrets, a revelation he plans to keep to himself until it proves useful.

Firsts and Other Notables
Bastion, the villain of the linewide crossover after "Onslaught", makes his first appearance in this issue, though it's really more of a cameo, as he only appears in the shadows in one panel (and later developments involving the character retroactively make the circumstances of his appearance here - routine, low-level field work - somewhat odd). 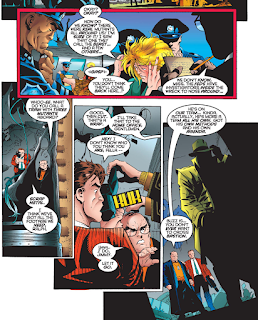 A few months before the identity of the X-Traitor will be revealed, Mister Sinister’s stroll through Bishop’s memories reminds us of that long-simmering subplot (though Bishop did not specifically come back in time to stop the X-Traitor, as Sinister claims here). 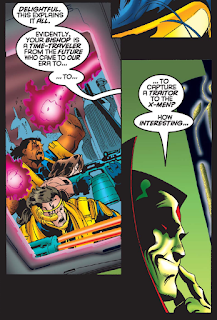 The back half of this issue is heavy on teases regarding the Gambit/Sinister connection, notably when Gambit recognizes the location of the Sinister lab to which he, Gambit and (Dark) Beast were taken, something which doesn't escape the notice of Dark Beast. 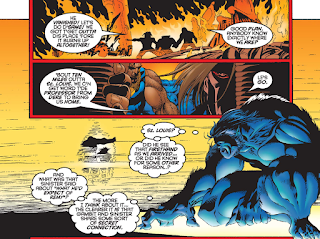 Also, Gambit fakes being injured in order to facilitate his escape, and Dark Beast seems to think Sinister is concerned with Gambit’s well-being. It reads like a further Gambit/Sinister tease, but it’s really not.
Mister Sinister's cache of mutant DNA, which was seemingly destroyed by the X-Men and Threnody in issue #34, is still up and running here (and will become a somewhat notable plot point again in the current "Dawn of X" era). 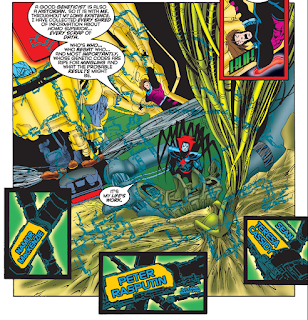 A Work in Progress
Bishop calls Gambit “Remy”, which seems odd (if he wasn’t going to use his codename, “LeBeau” feels more in-character for Bishop).
Rogue (who last appeared in X-Man #11), continuing her quest to get away from the X-Men, rents an apartment in South Carolina in this issue. 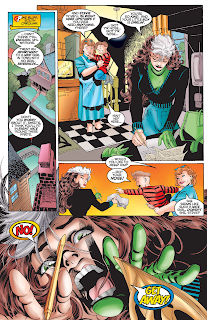 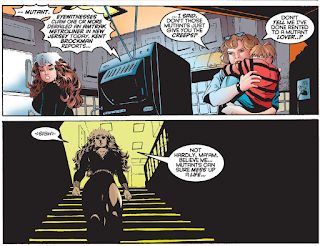 Austin's Analysis
While this issue marks the conclusion of the brief "Mutant Train" two-parter (Mark Waid's first solo story on the book and the last in a series of (seemingly) time-killing two-parters) and wraps up the A-plot of the story cromulently enough (I'm not sure the logic of Gambit's, er, gambit involving his and Bishop's powers and the stopping of the train holds up to much scrutiny by the standards of even comic book logic, but this also isn't a story that necessarily invites much scrutiny), it also feels much more concerned with teasing future stories. Not just the nigh-imminent "Onslaught" (via the references to the X-Traitor storyline), but also "Operation: Zero Tolerance" (via the introduction of Bastion), the next linewide crossover after "Onslaught", and the "Trial of Gambit", as the connection/past associations between Gambit & Mr. Sinister are once again highlighted. What's most interesting about all that setup work is that, with the exception of "Onslaught", Mark Waid will not be around to actually work on any of those stories, but also, he's not the originator of any of those plotlines, either. It really does underscore that, while Waid may be the sole credited writer on this issue, the books (at least the two main X-Men titles) are still very much editorially-driven, with a groupthink approach driving the overall narrative that supersedes the story needs of any one individual title.

Next Issue
Tomorrow, Selene takes out the X-Ternals in X-Force #54. Friday, the X-Men meet the new Wolverine in Wolverine #101. Next week, Generation X #15!