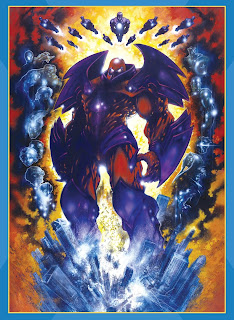 The ramp up to "Onslaught" continues as most the books start getting into their respective positions for the crossover (though Uncanny X-Men, in true 90s comic book fashion, first takes a moment to setup the next linewide crossover). Then we wrap up the year with another appropriate-for-Christmas action figure post and a Patron-selected review!
On Sale April 1996
December 2: Uncanny X-Men #333
December 3: X-Factor #123
December 4: X-Man #16

Power Rankings On Sale February 1996
Another ho-hum month, as nearly every series is simply treading water ahead of "Onslaught", while the two flagship books feature guest artists.
1. Uncanny X-Men #331
2. Wolverine #100
Despite the lack of Joe Mad, Uncanny takes the top spot thanks to another character-driven Iceman/Emma Frost encounter (which gains some added meaning given later revelations involving Iceman) and some nice fill-in work from Bryan Hitch. Wolverine, meanwhile, claims the #2 spot thanks to the Adam Kubert art which helps sell an otherwise-dubious development for the character.
3. Excalibur #96
4. Generation X #14
5.  X-Men (vol. 2) #51
6. X-Force #53
The "fine" tier; both Excalibur and X-Force are starting new stories, but Carlos Pacheco > Adam Pollina and London Hellfire Club/Black Air machinations > pointless Externals retcon. Generation X, meanwhile, wraps up the "Return of Emplate" storyline well enough, while Adjectiveless kicks off the book's final "two-part filler" story, a dubious start to Mark Waid's brief run.
7. X-Factor #121
Steve Epting's final issue helps bump this one above the previous issue, and keep it out of the bottom, but it's still a not-great conclusion to the Adversary plotline.
8. X-Man #14
9. Cable #30
Neither installment of the "Cable/X-Men crossover anyone who wanted it probably came to regret it" is terribly good or all that distinct from one another (Nate yells, Cable refuses to act, energy blasts get thrown around, Exodus is there), but the art sets them apart a bit, with Steve Skroce beating out Ian Churchill.
Newer Post Older Post Home
Posted by Austin Gorton at 12:00 PM

Email ThisBlogThis!Share to TwitterShare to FacebookShare to Pinterest
Labels: Power Rankings, X-aminations Ahead