"The Passenger"Plot
Raising across the Tatooine desert, the Mandalorian is attacked by a gang of bounty hunters after the child. He fights them off, but his speeder bike is damaged, forcing him to walk back to Mos Eisley. There, he meets with Peli, who introduces him to Frog Lady, an amphibious being willing to trade him information on the whereabouts of some Mandalorians in exchange for transporting her and her eggs to the moon of Trask - without traveling through hyperspace, which would destroy her eggs. As they slowly make their way towards the moon, two New Republic pilots perform a fly-by. When they attempt to identify his ship, the Mandalorian races towards a nearby planet, successfully evading the pilots but damaging the Razor's Crest in the process. Settling inside an ice cave for repairs, the child draws the attention of a pack of ice spiders, which quickly overwhelm the Mandalorian. Just then, the New Republic pilots return, blasting away the ice spiders and saying that after they looked him up, they decided the Mandalorian's good deeds while participating in a recent prison break just barely outweigh his bad, and let him off with a warning. Later, the Mandalorian manages to repair the ship's engines, but not its hull, so the trio resumes their journey, all crammed inside the Razor Crest's cockpit as they slowly make their way through space.

Firsts and Other Notables
This episode introduces two new characters; the first, called only Frog Lady, hires the Mandalorian to transport her and her eggs to the moon of Trask, where her husband and the eggs' father is waiting, and who possesses information regarding the whereabouts of some Mandalorians. 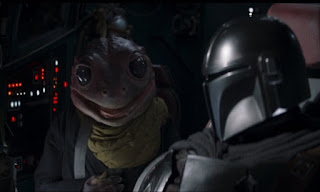 The second is the insectoid Dr. Mandibles, who is playing Sabaac with Peli when the Mandalorian and the child return to Mos Eisley. It's not clear what species Dr. Mandibles is, though he resembles the similarly bug-like Yam'rii, one of whom appeared in the original cantina scene in A New Hope. It's also possible he is one of the Kilik, a bug-like species which originated on Alderaan and played a significant role in the "Dark Nest" trilogy from the old Expanded Universe (which is also one of my least-favorite of the old EU stories).

Both "Frog Lady" and "Dr. Mandibles" have a retro, on-the-nose-description quality to their names, reminiscent of how the cantina and Jabba's palace aliens were referred to by Kenner in their original action figure names back in the day (ie "Hammerhead" and "Squid Head" and "Prune Face").
This is, apparently, the first time someone in a Star Wars film or TV show respond to "May the Force be with you" with "and also with you" - a fairly common real-world usage as it echoes the call-and-response from Catholic mass of "the Lord be with you"/"And also with you", but which has never actually been said aloud within the Star Wars universe before (it also continues the series' curious streak of referencing the Force at the same time it presents the Jedi - to the Mandalorian, at least - as weird outdated sorcerers shrouded in mystery. It's not a discrepancy limited to this series - the Original Trilogy had plenty of non-Luke people within the Rebellion using the phrase even while the Sequel Trilogy has positioned much of the Jedi and Force lore as the stuff of legend within the larger galaxy, but it is something worth watching for as the show progresses).
This episode is directed by Peyton Reed, who helmed Ant-Man and Ant-Man and the Wasp for Disney.

Casting Call
Frog Lady is voiced by Dee Bradley Baker, who voices all of the clone troopers in Clone Wars, and is played physically by Misty Rosas, who also performed Kuiil in the first season.

A Work in Progress
Peli and Dr. Mandible were playing Sabaac in the cantina, with Peli drawing an Idiot's Array (which is basically the Sabaac version of a straight flush in poker), a hand that was also mentioned in Solo.
One of the two New Republic pilots who confronts the Mandalorian in this episode is Trapper Wolf, played by Dave Filoni, who appeared at the end of "The Prisoner" last season to take out Ran's space station after the Mandalorian led the New Republic there.

They first attack the Mandalorian in this episode because his ship was identified participating in the prison break in that episode (it was a New Republic prison ship Mando and his crew infiltrated), but return to help him out due to the fact that he fought to protect the New Republic officer aboard that ship.
And of course, the droid Zero, whose vocabulator is repurposed by Frog Lady here to enable better communication between herself and the Mandalorian, was destroyed in that episode as well.
The ice plant where the Mandalorian and company are attacked by the giant spiders is Maldo Kreis, the same planet on which the series began.
Did You See?
The little bounty hunter who lasted the longest against the Mandalorian in the beginning of the episode resembles a minor character from The Force Awakens named Scrapjaw Motito. Presumably, this is a being of the same or similar species and not Scrapjaw himself, but with the Constable Zuvio appearance last episode, that's two TFA character references so far this season (maybe with the Sequel Trilogy wrapped, the show has been given license to raid the full prop & costuming departments at LucasFilm). 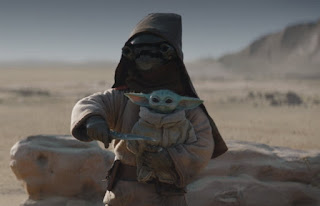 Not only is the cantina the Mandalorian enters to check in with Peli in this episode the Star Wars cantina from the original film (technically, Chalmun's Cantina), but Peli and Dr. Mandible are playing Sabaac in the same booth where one of the most controversial Star Wars scenes of all time took place.
What's the Deal With Krykna Spiders?
The spider-like creatures which hatch out of eggs like the alien eggs in Alien and menace our heroes this episode are called Kryykna spiders; they first appeared in Rebels, but their look originated from a design by Ralph McQuarrie (whose work Rebels had a habit of delightfully pulling inspiration from for many of its designs), in which they appeared to menace Luke in a cave on Dagobah (McQuarrie referred to the creatures as "knobby white spiders"). 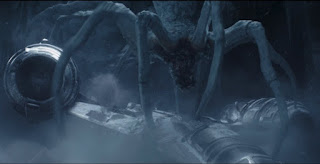 Austin's Analysis
Though this episode picks up right where the previous one left off (with the Mandarlorian and child attacked shortly after leaving Mos Pelgo with Boba Fett's armor), it is a decidedly quieter and more inward-looking episode than the season premiere, with a more lackadaisical pace (other than during the spider attack) that doesn't quite earn its full run time (like the premiere, this is another longer-than-usual epispde). Though the Mandalorian engages in a brief scuffle with some New Republic pilots (thanks to his role in the first season's prison break episode), this is ultimately another episode in which a creature/the world around him is the central antagonist, as the Mandalorian struggles to repair his ship, battle back some ice spiders, and keep his Frog Lady passenger (and her eggs) alive. Two episodes in, the theme of nature - in the form of krayt dragons and cave spiders - being the biggest danger is now a recurring one. While that's something of a staple of the Western stories this series is riffing on (in which the elements and dangerous wildlife in the "untamed" West are frequent dangers), it's much more unique within the Star Wars universe: the Jedi preach living in balance with nature, and characters having to fight/evade/outsmart various creatures is certainly a trope within the mythos. But the more broad notion of "us against the elements" developing here is somewhat unique within Star Wars, and it will interesting to see if that's something the series continues to explore going ahead, or if its role in these early season two episodes is just a coincidence.