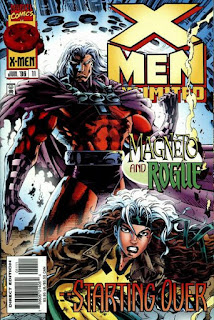 Plot
Concerned that Rogue may be a mutant (and therefore a danger to her young son Stevie), Rogue's landlady Melody visits the local chapter of Humanity's Last Stand. That evening, when Rogue returns from her shift waitressing at a nearby restaurant, a tear-filled Melody, realizing she made a mistake, apologizes to Rogue, shortly before armored members of Huamnity's Last Stand attack. Rogue is able to fight them off, but then Bastion appears. With Bastion threatening Melody & Stevie, Rogue stands down, and is taken to Huamnity's Last Stand's headquarters, where Bastion tells her he plans to kill everyone in the facility and frame Rogue for the act. Just then, one of the guards reveals himself to be Joseph, who frees Rogue. Recognizing him as a younger version of Magneto, she is is initially distrustful, but the two work together to fight off their armored foes. Outside the facility, they are confronted by the townspeople, who ask them to leave town. The pair flies off, but are attacked by Humanity's Last Stand leader Simon Trask, who targets them with a pair of missiles. Joseph is able to detonate the missiles, however, faking their deaths, and the pair return to Melody's home to retrieve Rogue's car. Joseph is trying to make sense of the X-Men's commitment to protecting a world that fears and hates them, when Stevie runs up to Rogue, telling her he knows he can't touch her, but says that if he could, he would hug her. As the pair drives off, Rogue tells Joseph that is why the X-Men do what they do, for the innocents who haven't yet been taught to hate.

Firsts and Other Notables
This issue picks up Rogue's story from X-Men #52, in which she rented a room in her ongoing attempt to not be a superhero and put the X-Men behind, and possibly revealed herself as a mutant to her landlady.
It also reintroduces Joseph, the seemingly de-aged & amnesiac Magneto, following his spotlight issue in Uncanny X-Men #327. The two will become something of a recurring duo going forward, appearing together often in an obvious callback to the Magneto/Rogue pairing in "Age of Apocalypse" (which was itself inspired by their pairing in the Claremont/Lee Savage Land story shortly before the '91 relaunch). 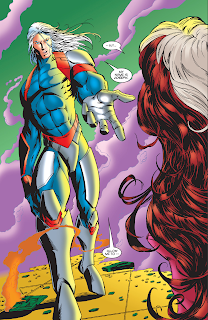 Published the same month as his official debut in Uncanny X-Men #332 (following a couple teasing cameos in the previous month), a slightly-off model Bastion pops up in this issue, hoping to frame Rogue in order to drum up national support for his anti-mutant operation. 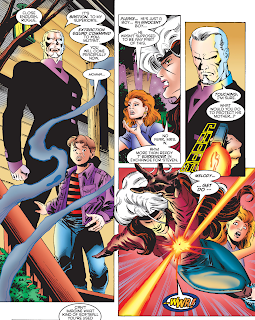 Humanity's Last Stand (the OTHER anti-mutant group with "humanity" in the name) returns in this issue, having established local offices throughout the country which encourage people to report information about suspected mutants. 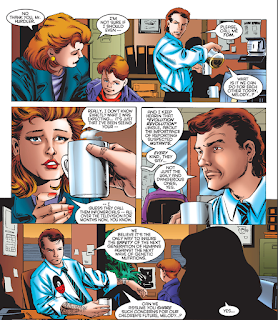 Their leader, Simon Trask (the Least Trask), also returns, and continues to appear mostly in shadows for no good reason. 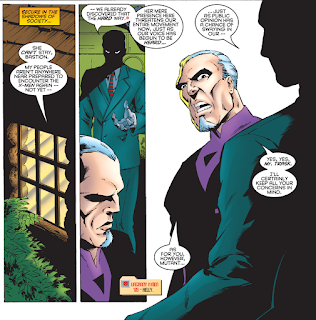 A Work in Progress
The dress Rogue wears while waitressing is the same one (or at least the same style/design) as the one she wore on her and Gambit's aborted first date in X-Men (vol. 2) #4. 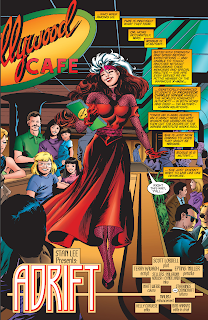 There's a couple of just hilariously-wrong footnotes in this issue, including one which attributes Magneto's death (in X-Men (vol. 2) #3) to Generation X #4, of all places, and another which references a subplot that was apparently cut from X-Men #52 (as there was nothing about Joseph & Humanity's Last Stand there or anywhere else). 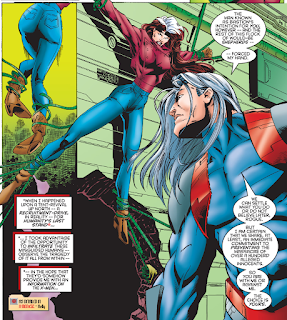 The Grim 'n' Gritty 90s
Rogue is working at a Planet Hollywood-esque restaurant.

Austin's Analysis
Whereas this series will occasionally be used to setup or further plots to be more fully explored in other books (like Sabretooth coming to the mansion in issue #3 or Dark Beast swapping places with Beast last issue), this is the kind of issue a quarterly, quasi-anthology series like this should do more often: it features a character who isn't otherwise part of the ongoing cast of another series, but is still familiar enough to readers that not a ton of space needs to be dedicated to establishing the character, and rather than tying in to the immediate story du jour running through the monthly books, it focuses on another aspect of the narrative and/or advances an entirely different subplot. The actual story here isn't anything special, a sort of standard "mutant tries to blend in but can't get away with it, then defends the town against the forces being set against the mutant, but gets run out of the town anyway" deal, with the pages not drawn by Steve Epting suffering in comparison, but it absolutely feels like its being told in the right place, picking up on both the Rogue and Joseph subplots ahead of "Onslaught". It also starts in earnest the interesting (but ultimately abandoned) "nature vs. nurture" character arc for Joseph, in which he struggles to avoid the darker impulses which drove Magneto, guided by Rogue. The extra pages are therefore put to good use, giving both characters the space to breathe a little while still telling a complete story. The level of craft involved isn't quite the same, but the end result is an issue not unlike the series' first, something which advances the larger narrative on the margins but is mostly interested in telling a straightforward but character-driven story.