"The Heiress" Plot
The Razor Crest (just barely) makes it to Trask, but crashes into the water upon landing. Leaving repairs in the hands of a Mon Calamari dockmaster, the Mandalorian reunites Frog Lady with her husband, who directs the Mandalorian to a nearby inn for further info about the whereabouts of his people. There, he makes a deal with a Quarren sailor, who promises to take him to other Mandalorians. They head out to sea, but the Quarren have set a trap, intending to feed the child and the Mandalorian to a mamacore in order to harvest his armor. They are saved by three Mandalorians led by Bo-Batan Kryze, heiress to the throne of Mandalore. Hoping to free the planet of Imperial occupation, she agrees to direct the Mandalorian to a Jedi in exchange for his help stealing a cargo of weapons from an Imperial transport. The four Mandalorians storm the ship and easily capture the cargo bay, but then Bo-Katan reveals she intends to capture the entire ship, and use it to find Moff Gideon, whom she believes possesses the Darksaber she needs to reclaim her throne. The Mandalorians manage to capture the ship before it crashes, but the captain kills himself before Bo-Katan can get any info out of him. Bo-Katan then honors her word and directs the Mandalorian to the planet Corvus and a Jedi named Ahsoka Tano. He departs, and shortly thereafter, he and the Child blast off Trask aboard the (just barely) repaired Razor Crest.

Firsts and Other Notables
The title of this episode comes from the character Bo-Katan Kryze, heiress to the throne of Mandalore. This marks the live-action debut of the character, but she has a long history in Star Wars animation, appearing repeatedly throughout both The Clone Wars and Rebels, where she was voiced by Katie Sackhoff (of the rebooted Battlestar Galactica fame), who plays the role here as well (which is just one of those great bits of casting, that they were able to get the actress for both appearances). In Clone Wars, Bo-Katan started out as part of the Death Watch (more on them below) before abandoning the group when they threw in with Darth Maul (and killed her sister, the ruler of Mandalore and one-time love interest of Obi-Wan Kenobi named Satine). In the final season which aired on Disney+ earlier this year, Bo-Katan helped overthrow Maul and free Mandalore from the Death Watch (just before the Empire showed up...). Later, in Rebels, she claimed the Darksaber from Sabine Wren and helped unite several Mandalorian clans (obviously, she then lost it at some point between then and now).

As thanks for his help capturing the Imperial freighter, Bo-Katan directs the Mandalorian to seek out Ahsoka Tano who is, of course, the former Padawn of Anakin Skywalker and central character of The Clone Wars, who fought alongside Bo-Katan against Darth Maul.
Moff Gideon makes a brief holographic appearance this episode, and we see that the Imperial Remnant (or at least the piece he controls) has become even more cult-like, with the captain executing his own men, attempting to crash the ship, and then killing himself all on Gideon's (unspoken) orders. 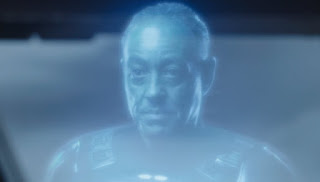 Casting Call
Titus Welliver, who will also be the Man in Black from Lost to me (for better or worse), plays the Imperial captain of the ship the Mandalorians commander. 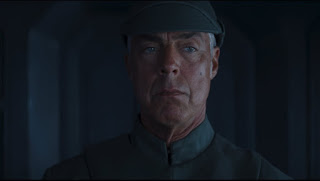 Mercedes Varnado aka WWE wrestler Sasha Banks, played Mandalorian Koska Reeves while Axe Woves was played by Simon Kassianides (who, amongst other things, was on Agents of SHIELD and in Quantum of Solace).
Bryce Dallas Howard directs this episode; she also directed "Sanctuary", the fourth episode of the series, which introduced Cara Dume and did the whole Seven Samurai-esque "save the village from raiders" thing.

A Work in Progress
Frog Lady has been reunited with Frog Gentleman, and Baby Yoda held his appetite long enough to stave off the extinction of their species. Phew!

The watery world of Trask is populated by multiple aquatic/amphibous beings beyond the Frogs, including the Mon Calamari and the "Squidhead" Quarren, both of whom hail from the similarly-watery planet Mon Cala (or Daq).
One of the interesting things about the Mon Cal in this episode is that, as a species, they are known for their prodigious shipbuilding abilities - the bulk of the captial ships in the Rebel fleet in Return of the Jedi (including the one Admiral Ackbar is commanding from) are Mon Calamari ships built by Mon Calamarians, so it's a bit odd that the Razor Crest repairs seem so shoddy.

Did You See?
The crane on Trask which helped pull the Razor Crest out of the water was either made from an AT-AT or is one of the OI-CT walkers introduced in Solo.

Howard confirmed that the the sequence in which the Razor Crest enters the atmosphere of Trask was shot in a way which intentionally homaged the re-entry of the Odyssey capsule at the end of her father's Apollo 13 (the telling detail is the shot of the water pouring off the instrumentation as the vehicle shifts from the cold of outer space to atmosphere).

What's the Deal With "the Watch"?
This episode reveals that the Mandalorians who rescued and raised the title character were members of the Watch, presumably a reference to the Death Watch group which operated on Mandalore during the Clone Wars. As stated here, they believed in the "old ways" of Mandalore and sought to return the world to its more militaristic, imperialist roots. Their leader, Pre Viszla (who shares a surname with one of the Mandalorians in the culvert on Navarro last season) wielded the Darksaber and eventually allied himself with Darth Maul in order to take over the planet, before being overthrown by Bo-Katan & Ahsoka.
It's an interesting twist in that it complicates the title character's journey (as he's been unknowingly raised by the "bad" Mandalorians who are basically, at best, overly militaristic & extremist Amish and, at worst, a terrorist sect), but also explains away some of the discrepancies between the depictions of Mandalorian culture here (ie they never take off their helmets) vs. elsewhere (like on Clone Wars, where Mandalorians like Bo-Katan took off their helmets all the time) and why the title character might be more sheltered in his knowledge of broader events (like his general ignorance of the Jedi as little more than a sect of vague sorcerers despite their not-insignificant role in Mandalorian politics just a generation earlier, to say nothing of Luke Skywalker and the fall of the Empire). It also makes "cultism" (or, at least, sectionalism) more of a recurring theme; not only does this reveal come in an episode which highlights the extremity of the Imperial Remnant, but also one in which the Mandalorian gets closer than ever to locating a Jedi, who are their own kind of cult/sect (albeit a more traditionally benevolent one than the Death Watch).
Austin's Analysis
After the previous episode more or less embraced the series' genre roots by telling a relatively straightforward journey/survival tale, this episode takes a turn in a different direction and dives deep into Star Wars lore, introducing a recurring Clone Wars character into live-action, delving into the history and politics of the Mandalorians, and revealing a bit more about the past of the title character (or, at least, of the specific group into which he's been adopted). It also gives the new season it's biggest, most extended action sequence, as the Mandalorian and his erstwhile new allies storm an Imperial ship and take on a squad of Stormtroopers, in a fashion that is both thrilling and entertainingly-efficient.
It works (beyond just the Star Wars nerd thrill of exploring this section of the lore) because it never lets the titular Mandalorian get lost or overwhelmed by the events: he remains the narrative focus, his actions here all taken in service of his larger, personal goal of reuniting the child with the Jedi. This allows all the other Mandalorian stuff from overwhelming the episode and turning it into an extended Wookiepedia entry. The audience is reasonably confident, because of our relationship with the character developed over the run of the series, that he's not about to change gears and throw in with Bo-Katan's mission (for now), but in affirming that, the series is nevertheless assuring us that for all backstory on display, this is still a show called "The Mandalorian" and not "Mandalorians".