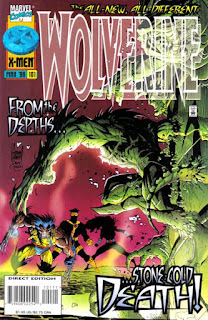 Plot
With the rest of the X-Men occupied fighting Ozymandias' stone avatars, the now-feral Wolverine dives into the chasm surrounding Ozymandias' historical helix after Cyclops. On his way down, Cyclops hits his head against the wall, but Wolverine is able to catch up to him and dig his claws into the rock, stopping their descent. Above, Jean briefly senses that someone is watching them during the fight; it is Elektra, who covertly intervenes to destroy two statues threatening Wolverine & Cyclops as they reach the top of the chasm. As the X-Men gain the upper hand against the avatars, Ozymandias senses that his defeat is imminent, and destroys the helix so as not to give up its secrets, before turning to dust himself. As the X-Men escape the collapsing temple, Wolverine briefly senses Elektra watching him from the shadows.

Firsts and Other Notables
Concluding the story began in Uncanny X-Men #332, this issue provides the first sustained look at the now nose-less, more feral and animalistic, Wolverine, following the events of the previous issue.
Elektra continues to stalk Wolverine (picking up her appearances last issue and in Uncanny #332), intervening directly here, briefly, with Jean noting that she has the ability to shield her mind from telepathy. 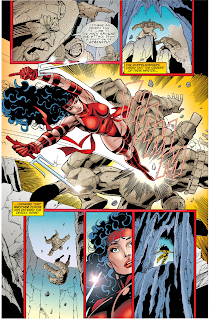 It’s implied here that a chunk of rock hits Cyclops in the same place as his earlier head injury which cost him control of his optic blasts, and suggests some kind of change has been wrought, but nothing ultimately comes of this. 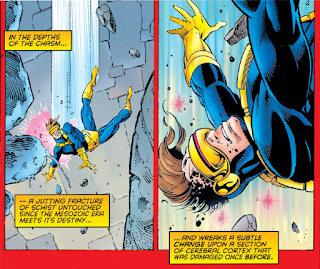 In other "nothing much comes of it" teases, Cyclops describes a carving of Professor X in Ozymandias' data column as being done with "reverence" and wonders what that means (whatever, if anything, it means, we'll never know). 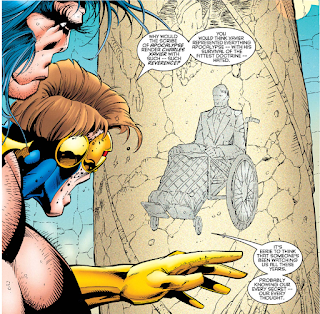 Also, Cyclops is oddly weirded out by the encounter with Ozymandias, believing it may herald the "end of us all", which is, presumably, just meant to be an ominous note to close out the story on because, again, nothing really comes of it. 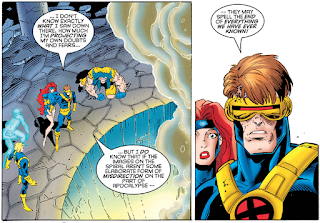 The cover of this issue features the label "All New, All Different", a reference to the run of X-Men issues using the same designation and reflective of Wolverine's new feral condition.
Creator Center
Val Semeiks returns to pencil this issue; Adam Kubert will return next issue, the final issue of his run as the regular artist, with Semeiks returning after that for a brief unofficial stint as the series' regular artist before Anthony Winn takes over.
The Chronology Corner
Cyclops and Jean next appear in X-Men (vol. 2) #51 and then join Iceman & Cannonball in their next appearance in Uncanny X-Men #333.

A Work in Progress
The previous chapter of the story in Uncanny #332 ended with Jean being strangled by a Magneto stone-bot, but she is free without explanation as this issue opens.
Ozymandias is described here as Apocalypse’s scribe, recording history on the big stone column for Apocalypse’s later perusal. It's also said that he was once a king. 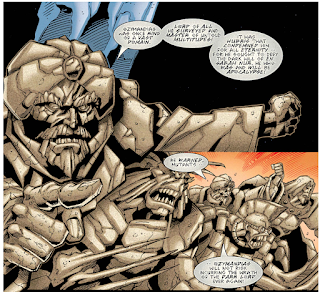 Ozymandias column of stone-carved data is destroyed this issue, but he says that the data itself lives on. 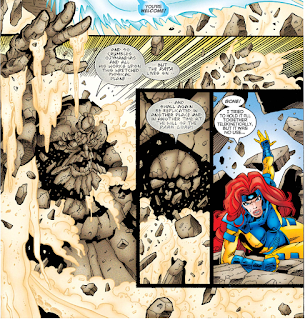 The Best There is at What He Does
Wolverine is able to use his bone claws to cut into rock and stop his and Cyclops’ descent, a further example of how the bone claws are functionally little different from the metal ones at this point.
Wolverine's responses to stimuli this issue are shown to be especially animalistic, such as when he licks Cyclops to wake him up. 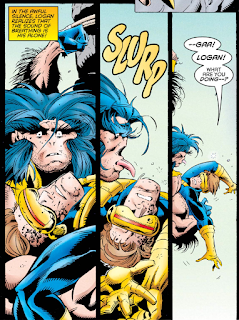 It's in the Mail
A response to a letter in this issue incorrectly asserts that Rose Wu survived the massacre at the Princess Bar in issue #98.
Austin's Analysis
Val Semeiks isn't a bad artist, and his work here is generally fine. But it definitely suffers following directly in the footsteps of Joe Madureira (who illustrated the first part of the crossover this issue concludes) and Adam Kubert (the series' regular artist), particularly in its depiction of the new feral Wolverine. More action-oriented than the first part of the story, this nevertheless manages to keep the title character centered in the narrative, giving us our first extended look (both in general and in this series) at the new iteration of Wolverine (with the character having been depicted played mostly off-panel/in the shadows in his previous two appearances). But where the Kubert and Joe Mad versions of Feral Wolverine were brutish, hulking figures, twisted variations on the classic Wolverine look that sold just how extreme a transformation the character experienced while still carrying a sense of menace about him, Semeiks' depiction here is much more restrained, and at times, comical (see: Wolverine licking Cyclops awake).
Thus, the first proper introduction to the new iteration of the character in this series - outside of its few brief depictions in the previous issue - downplays the extremity and body-horror of the transformation in favor of something more traditionally comic book-y and cartoon-y, less "a savage beast stripped of humanity" and more "a cuddly but fiercely protective dog". It's certainly not the only problem that will befall this iteration of the character, but it does arguably trip up the character right out of the gate in a way it never really recovers from, visually presenting Feral Wolverine less like a tragic regression to a barely-human form and more like simply a Funny Animal version of Wolverine, thereby making it that much more difficult for readers to take the whole concept as seriously as is seemingly intended.

Next Issue
Next week: Generation X #15, Excalibur #97, and X-Man #15!
Like what you read? Then support us on Patreon & gain access to exclusive reviews of X-Men: The Animated Series and more!