"The Siege"
Plot
The Mandalorian decides his ship needs further repairs, and decides to return to Nevarro. On Nevarro, Cara Dune flushes a group of Aqualish raiding the old Mandalorian culvert. Shortly thereafter, the Mandalorian arrives, reuniting with Cara as well as Greef Carga. Greef offers to repair the Razor Crest in exchange for the Mandalorian's help destroying an old Imperial base on the planet, the last thing standing in the way of true independence for the planet. Leaving the child in the care of a protocol droid school teacher, the Mandalorian sets out with Cara, Greef and Greef's associate Mythrol, to the base. They plan to use the volcano generating power for the base to destroy it, but after initiating that process, they realize the base is actually a front for the cloning operations that had been targeting the child, run by Moff Gideon. The Mandalorian blasts off to retrieve the child while the other three fight their way out of the base before it explodes. They commander a Marauder troop transport but a squad of Scout Troopers followed by a trio of TIE fighters set out after them. Manning the guns, Greef is able to destroy one of the TIEs, but the guns are damaged in the process. Just then, the Mandalorian sweeps in aboard the newly repaired Razor Crest and destroys the rest of the TIEs, then departs. Later, Cara meets with New Republic Captain Teva, who tells her something nefarious is happening in the Outer Rim, while Moff Gideon receives word from a spy on Nevarro, one of the mechanics who repaired the Razor Crest, that the tracking device has been successfully installed, along with confirmation that the Mandalorian still travels with the child.
Firsts and Other Notables
This episode brings back Greef Carga and Cara Dune, who team-up with the Mandalorian to infiltrate & destroy an Imperial base on Nevarro, which turns out to be a front for some kind of cloning/genetics lab. The failed clones (and/or artificially-generated beings) spotted briefly in a series of tanks inside the base have a vague resemblance to Snoke, the presumed leader of the First Order in most of the Sequel Trilogy who was revealed in Rise of Skywalker to be, essentially, a meat puppet of a revived Emperor Palpatine. It's possible the work being done in this facility is meant to lead into the processes used to develop Snoke and/or revive the Emperor (in an aural nod to this idea, a little bit of the musical theme used for Snoke in The Last Jedi can be heard when the cloning tanks are discovered). 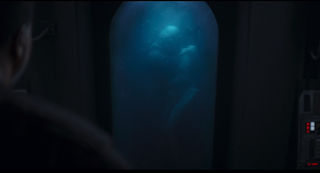 Additionally, at the end of the episode, Captain Teva (one of the New Republic pilots who bailed out the Mandalorian in episode two and, presumably, has followed him to Nevarro) mentions to Cara Dune that he believes something sinister is happening in the Outer Rim, with recent events suggesting some kind of coordinated maneuvers, something he is having trouble convincing others in the New Republic to believe. That is all, presumably, references to whatever Gideon is doing (which may or not may not be early machinations that will lead to Snoke/the First Order), but, coincidentally or not, it also sounds very similar to things said by characters like Princess Leia and Poe Dameron in various stories set after this show but before the First Order's emergence in The Force Awakens.

The Mythrol whom the Mandalorian captured at the beginning of the very first episode returns here, with Greef Carga having thawed him out of carbonite and put him to work; he joins the Mandalorian, Greef, and Cara on their mission (much to his dismay). 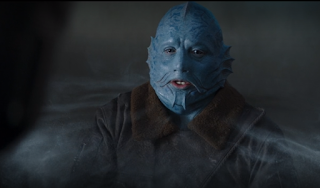 In a shot that took the internet by storm, part of someone wearing jeans and t-shirt can be seen standing behind Greef Carga at one point during the fight inside the Imperial base (he's under Greef's gun arm in the screenshot below). 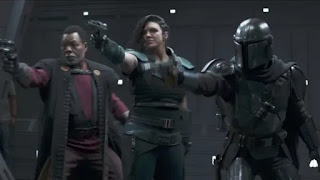 This episode was directed by Greef Carga actor Carl Weathers, no stranger to action scenes himself.

A Work in Progress
The aliens Cara rousts in her capacity as Nevarro's marshal are all Aqualish aka Walrus Men (aka butt-faces), the same species as Ponda Baba, the alien who attacked Luke in the cantina in A New Hope and lost his arm to Obi-Wan's lightsaber.

We see the Mandalorian lift his helmet up ever so slightly to drink from a cup early in the episode, though it's not clear if the front of the mask has a slight hinge that allows it to raise up or if he's tilting the entire helmet back to do so. 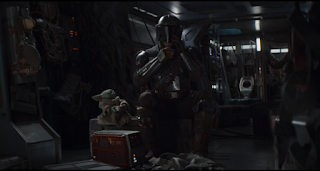 The protocol droid teaching the kids on Nevarro mentions the Akkadese Maelstrom surrounding Kessel, which is the thing Han Solo flew through in Solo to complete his infamous Kessel Run.
More Solo nods: the alien mechanic/Imperial spy that plants the tacker in the Mandalorian's ship is Mimbanese, a native of the planet Mimban on which Han met Chewbacca shortly before deserting the Imperial army. 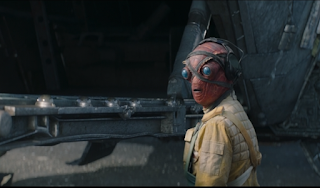 The Mythrol complains that his left eye hasn't been the same since coming out of hibernation, presumably a nod to Han's temporary blindness in Return of the Jedi after Leia thawed him out.
In the recording discussing the Empire's cloning efforts, Dr. Pershing mentions the subject's "m-count", which is presumably a reference to midichlorians, one of the more loathed elements of the Star Wars mythos added by the Prequels, and something that would be an appropriate referenc, if the Empire is trying to clone Force-sensitive beings.
The Mandalorian learns Moff Gideon is still alive this episode; he had previously assumed he'd died during their confrontation at the end of last season, allowing him greater freedom of movement with the child.
The shot of Moff Gideon's Star Destroyer towards the end of the episode is, of course, an homage to the post-crawl opening of A New Hope.

The episode concludes with Moff Gideon surrounded by a series of chambers (not unlike the cloning tubes from the Imperial base) containing what appear to be Dark Troopers, super-advanced Stormtrooper armor from the Dark Forces video game.

Did You See?
There is a statute of IG-11 on the street just outside the school on Nevarro. 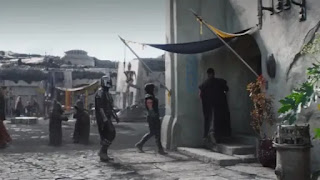 After popping up in the season premiere, Constable Zuvio (or at least someone wearing his hat, if the show is starting to reuse props/costumes), everyone's favorite Sequel Trilogy-era action figure-turned-star of the cutting room floor, can be spotted amongst the crowds on Nevarro as well.
Austin's Analysis
Generally speaking, this isn't a very plot-heavy show. Certainly, each episode usually has a central plotline driving the narrative (defeat the krayt dragon, deliver Frog Lady to Trask, etc.), with some kind of season-long arc (get the child to a Jedi) informing those individual side-quests. But this isn't a show which lives or dies by the twists and turns of its macro plots, that leaves viewers wondering what's going to happen next and puzzling over assorted narrative mysteries. The closest thing the show has to something like that is the question of how the child came to be and why, exactly, the Empire wants him so badly, and this episode is chiefly concerned with making the most concerted effort to develop that subplot of any episode yet. It's revealed that it was no accident that the client was on Nevarro when the Mandalorian was hired to find the child way back in the first episode, as Nevarro, it turns out, is home to an Imperial base conducting some kind of cloning experiments, and it's all in service of Moff Gideon and his larger machinations. What those machinations are - and how they tie into the larger history of the Star Wars universe and the fate of the Empire/New Republic (and possibly even the First Order) - form the core of the series' main "mystery" plotline.
Beyond the arch plotting, this is another fun, action-oriented episode. The return of Mythrol injects some humor into the proceedings, and it's genuinely heart-warming to see the easy camaraderie that has formed between Greeg, Cara, and the Mandalorian. The action scenes do a good job of maintaining the illusion of danger while still allowing the protagonists to succeed, without making them seem overly skilled or inept doofuses (helped, in part, by having their most potent weapon - the Mandalorian - fly off to protect the child when the battle really starts up). Hopping around the galaxy from place to place is very much part of this series' DNA, but like the return trip to Tatooine in the first episode of the season, having familiar places and friendly places to revisit helps the series feel full and lived-in just as much as the travelogue explorations of the new and different.
Like what you read? Then support us on Patreon &amp; gain access to exclusive reviews of X-Men: The Animated Series and more!