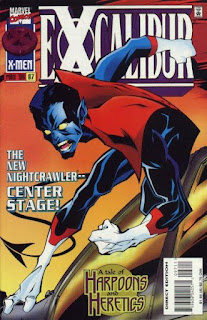 Plot
Returning from America with Alistair Stuart, Nightcrawler & Meggan work together to dispatch the Black Air attack helicopters targeting them. Meanwhile, Kitty & Wolfsbane fly Captain Britain to London in the Midnight Runner, warning him to be careful as he enters the Hellfire Club. On Muir Island, Moira comes across Douglock having planted himself in the ground. She then heads back inside to find Pete Wisdom chasing after Lockheed, who has stolen his cigarettes. In London, Black Air agent Scratch arrives outside an arcane door in the tunnels beneath the city. Inside the Hellfire Club, Captain Britain meets with the Inner Circle and claims his father's title of bishop. His application is met by resistance from the Red Bishop, but the rest agree, elevating him to the position of Black Bishop. Back at Muir Island, the rest of Excalibur meets with Alistair, who tells them that Black Air has taken over W.H.O and formed an alliance with the Hellfire Club, his knowledge of which being what led them to target him. Outside, Douglock is impaled by a harpoon from a passing plane, which proceeds to rip him out of the ground and carry him away.

Firsts and Other Notables
Captain Britain becomes Black Bishop of the London Hellfire Club this issue, claiming the title on the grounds that his father held it and the title is hereditary. It provokes some back-and-forth amidst the Inner Circle (the Red Bishop objects and is an ass about it), including an explanation of how the London club has swapped white for red as the opposing color to black, in order to distinguish themselves from the US branch, but if memory serves, not much comes of Brian's adoption of this role outside of this immediate story. 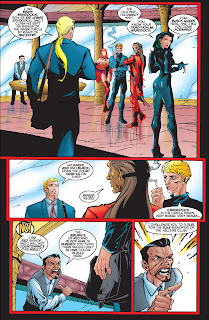 After meeting with Sebastian Shaw last issue, here Black Air Agent Scratch is seen approaching an arcane door beneath the streets of London; this is the entrance to the chamber containing the massive demon which Black Air and the Hellfire Club are plotting to release on the city in order to take advantage of the ensuing chaos. 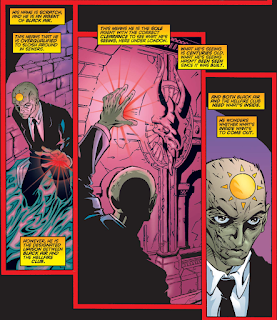 Alistair who, prior to last issue, last appeared in issue #65 promising to take care of the Warpies (aka the children mutated by Jasper's Warp in pre-Excalibur Captain Britain comics) confirms this issue that most of them are dead now, having been killed by Black Air after they took over the former Weird Happenings Organization following a series of experiments (though a few will turn up alive in later volumes of Excalibur). 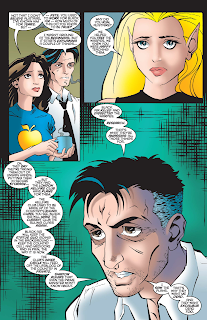 Douglock is captured at the end of this issue, by Black Air (as we'll learn next issue), one of the steps in the overall plan they're carrying out with the Hellfire Club. 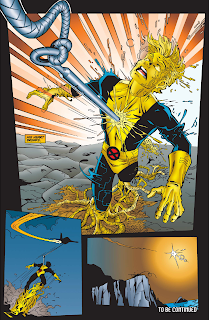 Creator Central
Casey Jones taps in for Carlos Pacheco on this issue, continuing their Silvestri/Leonardi approach to the series.

A Work in Progress
Nightcraler notes that his teleportation powers work better across horizontal, rather than vertical, lines, something broadly consistent with the earlier notion that Nightcrawler can teleport straight up but has to fight gravity's pull to do so. 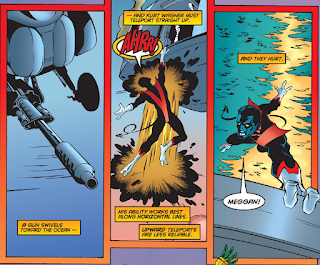 Before being captured, Douglock explains to Moira an epiphany he's had involving his dual nature and the fact that he doesn't necessarily need to reconcile both seemingly conflicted sides of himself (human and Phalanx); I don't recall exactly where, if anywhere, this is all going, but I suspect little comes of it. 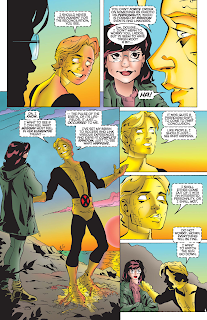 The Reference Section
Meggan strongarms some Black Air pilots into abandoning ship, and she compares herself to Sigourney Weaver. 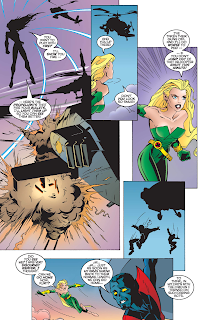 Austin's Analysis
Warren Ellis' issues are usually more about tone and mood than plot (see, for example, the "Dream Nails" trilogy, which is more about hooking up Kitty & Wisdom amidst a loose X-Files pastiche than it is the beats of its actual story), which makes this issue stand out for just how plot heavy it is. After using the opening action beats to resolve the previous issue's cliffhanger, this is mostly all about advancing the ongoing mystery of the Black Air/Hellfire Club alliance (one brief, mildly humorous Wisdom/Lockheed fight aside): putting Captain Britain on the inside of the Hellfire Club, trying to work out their overall plot and the root out Mountjoy, introducing the weird "underground door", having previous weird happenings expert Alistair Stuart confirm they are, indeed, weird happenings afoot, and then ending it all with Douglock's abduction, which is meant to call to mind the future circumstances of issue #94 (in which Douglock had been harnessed as a security system by Black Air). It's not often that a Warren Ellis issue of this series can be described as "a bunch of stuff happens", but that's basically what this is.
Next Issue
Tomorrow, X-Man #15. Next week: Marvel vs. DC #1-4!