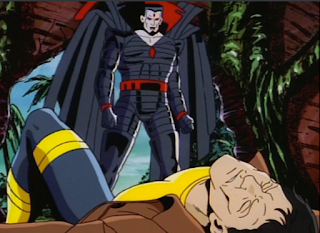 "'Til Death Do Us Part: Part Two"
Original Airdate
October 30th, 1993
Producer: Larry Houston
Story: Steven Melching
Storyboard Artist: Larry Houston
Story Editor Developer: Eric Lewald
Writer: Michael Edens
Plot
As Cyclops & Jean Grey set sail for the island where they're spending their honeymoon, Beast escapes from the Danger Room in which Morph had trapped him. Outside the mansion, Mister Sinister continues to manipulate Morph, and says he will take care of Cyclops & Jean himself. As the newlyweds approach their island destination, they're attacked & captured by the Nasty Boys, while Wolverine rescues Jubilee from the Friends of Humanity. Reconvening at the mansion, the X-Men begin to suspect someone is messing with them. Just then, Professor X enters, warning of a neural disruptor affecting their minds, but Wolverine immediately senses Morph's scent and exposes him as Xavier. Morph manages to escape, however, and flies off in the Blackbird. Meanwhile, Mister Sinister tells the captive Cyclops & Jean that he intends to use their DNA to create an army of powerful mutants. Morph arrives, and taunts Cyclops, revealing he was the minister at their wedding, but Sinister stops him from killing Cyclops. Just then, the X-Men, having tracked Morph, show up. As they fight the Nasty Boys, Cyclops appeals to Morph's better nature, and he turns on Sinister, allowing Cyclops to escape. Cyclops frees Jean and blasts Sinister, and the energy seems to harm him, prompting Sinister to retreat. Morph sneaks off on his own, but Wolverine vows to track him down, while in Antarctica, Magneto & Xavier meet and realize they've been setup, just before an avalanche crashes down on top of them.
What to read the rest before everyone else? Become a patron via Patreon!
Become a Patron!
Newer Post Older Post Home
Posted by Austin Gorton at 12:00 PM