Plot
Rex & Ahsoka, with the assistance of A7 and the other droids, manage to escape the medbay without killing any of the clones attacking them. With all the escape pods destroyed, Ahsoka suggests they try to find a shuttle to use for escape. Meanwhile, Maul, still intent on serving as the distraction Ahsoka released him to be, destroys the Star Destroyer's hyperdrive, dropping it into real space and into the gravity well of a moon. Inside the hanger, Rex & Ahsoka find the remaining clones predicted their move, and are waiting. Pretending to have captured Ahsoka, Rex tries to reason with the clones, telling them Order 66 doesn't apply to Ahsoka, who is no longer a Jedi, in order to give the droids time to work. They manage to drop the hanger elevators down, removing most of the clones. As Rex & Ahsoka battle the few remaining, Maul enters the hanger, and takes off in the sole remaining shuttle. Ahsoka grabs it with the Force, but releases it in order to save Rex. The pair drop into the hanger's lower levels and find a Y-wing. Ahsoka gets Rex aboard just as the Star Destroyer begins to break up as it enters atmosphere. Falling through the wreckage as the ship crashes onto the moon, Ahsoka manages to get aboard the Y-wing as the Star Destroyer slips below the clouds. Later, Ahsoka stands before the graves of dozen of clones, and drops her lightsaber to the ground. Much later, an Imperial shuttle lands on the now snow-swept moon. Imperial Stormtroopers & probe droids emerge, followed by Darth Vader. He finds Ahsoka's fallen lightsaber, ignites it, then takes the saber and returns to his shuttle, passing a cracked clone trooper helmet bearing Ahsoka's markings.

Firsts and Other Notables
The season and series finale of The Clone Wars, this episode also concludes the "Siege of Mandalore" arc and deals with the immediate fallout of Order 66, chronicling Ahsoka & Rex's efforts to survive. They will each next appear, chronologically, in Rebels.

Darth Vader makes his first and only appearance in the series in a dialogue-less coda set an indeterminate amount of time in the future which concludes the series (not unlike the wordless codas which conclude each of the saga films), as he discovers the crashed Star Destroyer and one of the lightsabers, discarded by Ahsoka, which he gave her in the arc's first episode (this scene also features the only appearance of Imperial-era Stormtroopers & equipment in the series). 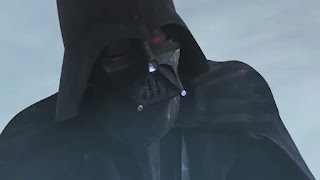 Maul makes his escape (after destroying the Star Destroyer's hyperdrive) in true dickish fashion, stealing the working shuttle while leaving Rex & Ahsoka behind. From here, he presumably maintains his control over the Shadow Collective before eventually running afoul of Ezra Bridger and, ultimately, his final fate, in Rebels.

In a surprisingly touching moment, A7 and the rest of the droids assisting Ahsoka are killed in this episode.

A Work in Progress
Jesse, the Clone Trooper whom Maul tortured for info in episode ten, is the one leading the attack on Rex & Ahsoka throughout this episode.

The moon into which the Star Destroyer crashes is thus far unnamed.

Ahsoka's fall from the Star Destroyer and scramble to reach the Y-wing piloted by Rex is likely a callback to the arc's first big action scene, in which Ahsoka leapt from ship to ship as her forces descended on Mandalore.

Similarly, just as that episode included a scene of the 501st standing before Ahsoka in their newly adorned helmets, here she does so again, standing before the graves of those same soldiers, their helmets now used as gravemarkers.

Did You See?
The bird flying over Vader in the episode's coda is likely a convor, a common bird species that appears in both Clone Wars & Rebels, and may even specifically be Morai, a convor spirit guardian of sorts with a connection to the Daughter (one of the three aspects of the Force from the planet Mortis), who assisted & watched over Ahsoka in Rebels.

Did You Hear?
The musical chanting which opens this episode was performed by a live choir, a first for this series.

Austin's Analysis
About midway through this episode, once it became clear that the main story - and thus, the conclusion of the final story arc, the season, and the series - would focus entirely on resolving the immediate question of how Rex & Ahsoka would escape a Star Destroyer filled with Clone Troopers brainwashed into killing them (and Maul), I started to lament that the final episode of the series wasn't going to pull back, to focus on broader events and tie into the narrative arc of the Star Wars universe at this time (akin to what the second episode of the arc did), to give us, say, Ahsoka's reaction to the death of the Jedi or the transformation of the Republic into the Empire, to show us Maul's reaction to seeing his old master's plan come to fruition as he's crowned Emperor.

But by the conclusion of the episode, following those final, near-silent, elegiac minutes which showed Ahsoka & Rex burying the deceased Clones then vanishing into the snow before a detachment of Imperial troops, led by Darth Vader, arrived on the scene, it was clear the Clone Wars received the most appropriate ending possible. Revenge of the Sith, and the entire narrative arc of the Prequel Trilogy, was about the fall of Anakin Skywalker, and with him, the Jedi Order & the Republic. The Clone Wars, for seven seasons, was, at its name suggests, about the Clone Wars, with Rex & Ahsoka, two characters created for the series, coming to stand as the central figures of a story designed to show the costs of war, the way it changes people and impacts lives beyond the grand sweeping machinations of Sith Lords and Jedi Knights, a story which runs parallel to, and occasionally intertwines with, the events of the Prequels and adds detail, context, and new meaning to those events, but which is determined to tell its own story along the way.

Concluding that story with Rex & Ahsoka, working together to survive but to also spare the lives of their recent comrades-in-arms, who are attacking them through no conscious will of their own, is vastly more fitting than any efforts to turn the narrative back to the arch events unfolding simultaneously in Revenge of the Sith. The Clone Wars is the story of Ahsoka, and Rex, of the clones, and the war. It is ultimately not Anakin's story, or Palpatine's, or the Jedi's (though they have their place within it). It ends, appropriately enough, Pyrrhically, as Ashoksa & Rex live to fight another day, but are unable to prevent the deaths of a vast number of their former comrades, or the escape into the greater galaxy of Maul, or the fall of the Jedi or the rise of the Empire. It is tragic & bittersweet & quietly hopeful, the ending this series deserved, and which it fully earned.