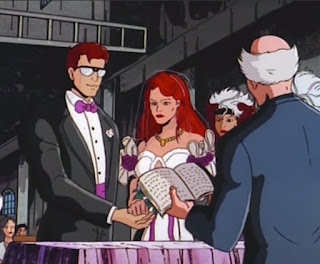 Original Airdate
October 23, 1993
Producer: Larry Houston
Story: Steven Melching
Storyboard Artist: Larry Houston
Story Editor Developer: Eric Lewald
Writers: Robert N. Skir & Marty Isenberg
Plot
Cyclops and Jean are married, with all the X-Men in attendance save Wolverine, who instead battles robots modeled after Cyclops in the Danger Room. Meanwhile, Senator Kelly is sworn in as President of the United States and issues a full pardon to Beast, while the reverend who officiated Cyclops & Jean's wedding turns out to be Morph, who survived the Sentinel attack and now plots revenge, though he seems torn on the matter. He poses as Magneto and calls Xavier, urging him to come to "Magneto's" aid at a location in Antarctica. Later, Gambit, Beast & Wolverine are playing pool when the bar is attacked by the Friends of Humanity, an anti-mutant group formed by Graydon Creed. He uses footage of the ensuing fight to depict the X-Men in a negative light, helping tarnish mutants in the media. Meanwhile, Morph infiltrates the mansion and, posing as the various X-Men, sows discord amongst them, tricking Rogue into knocking out Gambit and sending Jubilee away to the Friends of Humanity's headquarters. When another anti-mutant riot breaks out, Storm & Rogue respond, but Morph uses his powers to pose as the police chief and orders his men to shoot down Storm. As she's taken away in an hospital, Mister Sinister monitors events, pleased things are going according to his plans.
What to read the rest before everyone else? Become a patron via Patreon!
Become a Patron!
Newer Post Older Post Home
Posted by Austin Gorton at 12:00 PM