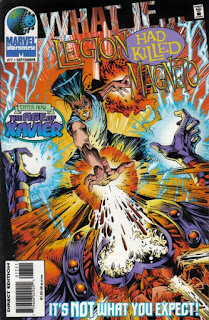 In a Nutshell
Legion kills Magneto in the past, leading to a world where Xavier dies battling Apocalypse & mutants become more feared & hated than ever.

Plot
Legion goes back in time and kills Magneto as a young man, just after he escapes from Auschwitz. In the future, mutants are beloved celebrities, the X-Men, under the auspices of Forge, the most famous mutants of all and lacking purpose; they are currently preparing for a public appearance involving a mock battle with the old Hellfire Club. Meanwhile, at the New York headquarters of the Hellfire Club International, the wealthiest & most ambitious mutants are attacked by mutants loyal to Apocalypse, in the name of Apocalypse's "survival of the fittest" code. In the wake of the attack, a distraught Xavier visits a retired Scott & Jean in Alaska, asking them to return for a mission, but they refuse. Later, as the X-Men are about to begin their performance in Washington DC, Apocalypse attacks. Seeing the fight on TV, Scott & Jean go back into action, with Jean using her Phoenix powers to teleport them to DC. After Apocalypse kills Xavier, in the face of his unrelenting attack, Jean uses the Phoenix Force to destroy him and his followers along with hundreds of thousands of bystanders. In the wake of Apocalypse's attacks, mutants have become hated & feared, creating an ominous feeling as Scott & Jean re-open Xavier's school to further his dream of co-existence and Apocalypse's forces regroup to continue his mission.

Firsts and Other Notables
Published only two months after the end of "Age of Apocalypse", this issue escapes from a premature return to that storyline only on a technicality: it re-imagines "Legion Quest", the story which led to "Age of Apocalypse ("but not Age of Apocalypse itself!"), showing a successful version of Legion's plan to kill Magneto and (theoretically) grant himself a happier life.

The point of deviation occurs with Legion going back to shortly after World War II, not "Twenty Years Ago Cairo", to kill Magneto. As a result of Magneto being killed then, he's not around to help protect Gabby Haller during Baron Strucker's attack (chronicled in X-Men #161); therefore, Legion prevents his own birth (just as in the original story when he accidentally kills Xavier). 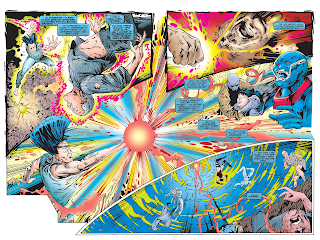 With mutants on the rise in this reality, the Hellfire Club becomes a corporation, attracting a wide variety of mutants, including Black Tom, Gideon, Archangel & Archangel. 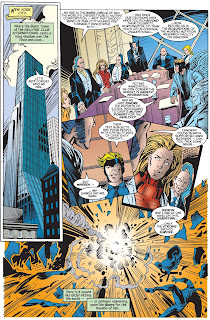 Jean Grey still gains access to the Phoenix Force in this reality (and is manipulated by Mastermind, prompting a confrontation with the Hellfire Club, but she (presumably) doesn't die in the course of that experience. 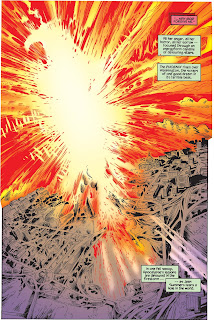 Creator Central
I'm not sure how Warren Ellis ended up scripting this, but his is the only name in the credits I recognize (aside from Starkings and editor Carl Potts).

A Work in Progress
Juggernaut is very concerned when Apocalypse's group of followers attacks the Hellfire Club meeting of which Black Tom is a part. 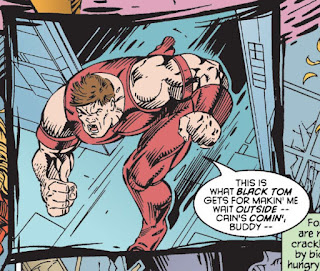 Gideon is more useful in this issue than at any other point prior. 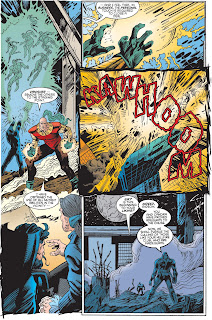 Austin's Analysis
Even putting aside the relatively quick turnaround in terms of the events which inspired this issue's alternate reality, this is a strange What If? story. It can't answer its title question in a positive way (because that would undermine the X-Men's efforts to stop Legion from killing Magneto in the mainline "Legion Quest"), but at the same time, it doesn't fully commit to the standard What If? "everyone dies!" resolution. Instead, it straddles the gap between that and "everything turns out more or less the same", creating an ultimately bittersweet ending, one which sees mutants more or less embraced as heroes but at the cost of the moral purpose of the X-Men, before a catastrophe leads to a massive body count (which wipes out a bunch of "main" characters, in true What If? fashion)) and pushes mutants back into a "feared and hated" categorization, leaving Cyclops & Phoenix to lead a new generation of mutants. In doing so, this story tries to hit several different What If? beats and doesn't quite land any of them (the issue is also, of course, deeply undercut by the barely-professional art), but to its credit, the story goes to some unexpected places (the idea that Legion's actions led to a world that is better for mutants in general but in which his father is still miserable is a nicely understated bit of irony), and it wisely & appreciatively avoids what must have been a major desire to revisit "Age of Apocalypse" and its more operatic storytelling.