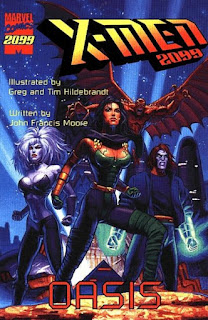 In a Nutshell
The X-Men discover a new mutant haven built by an old flame of Cerebra's.

Plot
In 2090, Cerebra is on the run from her father, and is rescued from a bounty hunter by Ryu Kobolt, who offers her safe haven. Nine years later, Bloodhawk is attacked in the New Mexico desert by two mutants, Pandora & Memphis. Later, Cerebra, Fitz & Luna discovers a fantastic domed city, inside of which they discover Bloodhawk. He tells them the city is called Oasis, and after being captured by Memphis & Pandora, he came to realize the place was a refuge for mutants, and that he belonged there. The X-Men are then introduced to the Oasis' architect, who turns out to be Ryu. He explains that he intends for Oasis to be a safe haven for members of all species to gather. The X-Men remain suspicious, but he allows them to explore Oasis on their own. As Fitz & Luna do so, Cerebra confronts Ryu, angry over him abandoning her all those years ago despite their feelings for one another. Ryu explains how he had contracted a deadly disease and left to spare her, wandering the country before finding new purpose. He then reveals that he intends to kill everyone who hasn't come to Oasis, in order to allow the Earth to heal itself. Cerebra is horrified, but Ryu places her in suspended animation while his agents attack Fitz & Luna. But Memphis has come to see the error of his ways, and sacrifices himself to stop the missiles Ryu intended to launch to wipe out the remaining life on the planet, killing Ryu and destroying Oasis in the process. The X-Men, including Bloodhawk, manage to survive, still hoping their dream of peaceful coexistence will someday come to pass.