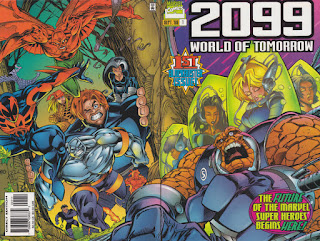 "The World of Tomorrow"
September 1996

In a Nutshell
The survivors of the planet wide flooding begin building new lives in the Savage Land.

Plot
The Thing, having led a team to the Ares colony on Mars in search of resources, crash lands on the planet, and is taken from the crashed ship by a mysterious figure. Meanwhile, on Earth, some of the surviving Wild Boys have formed a boat colony, in which they participate in arena-style combat, while the rest of the survivors of the massive flood have gathered in the Last Refuge, in the Savage Land. As Morphine Somers, Cerebra, & Invisible Woman attempt to form a government, another team, including Bloodhawk, Willow & Nostromo, explore the surrounding jungle, hoping to make it more habitable. Back at the Last Refuge, Mademoiselle Strange uses her mystical powers to dig a hole in order to reach ground water. Back on Mars, the rest of Thing's crew, including Metalsmith, December, & Twilight, regain consciousness, and head towards the Ares colony. In the Savage Land, Wulff & Uproar discover a castaway washed up on shore, infected with the techno-organic virus. Before dying, he mentions a city in the mists, and Spider-Man sets out to investigate. Meanwhile, Mademoiselle Strange's spell summons an evil presence, which pulls her down into the water & triggers an earthquake, while the jungle team discovers a crashed alien space ship that causes Nostromo's powers to flare out of control. On Mars, the crash survivors are attacked when they reach the Ares colony, while Spider-Man discovers Uproar & Wulff have stowed away, hoping to settle scores with the Wild Boys. But as their ship nears their destination, the Wild Boys fire an ionic cannon, destroying it.