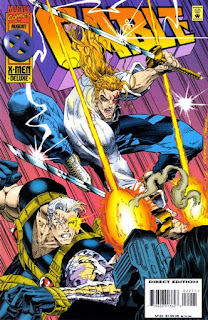 In a Nutshell
Ian Churchill comes aboard as Cable fights some Genoshans at the airport.

Plot
Aboard an inbound flight to New York, former Genoshan Magistrate Renee Majcomb prepares to illegally enter the country. Meanwhile, Cable & Domino meet the departing Rictor at the airport. As Renee deplanes, she is observed by Hawkshaw & Pipeline, former members of the Press Gang. Rictor & Shatterstar arrive at the airport and enter amidst anti-mutant and anti-Genoshan protesters, then find Cable waiting at Rictor's gate. He tells him that there will always be a place in X-Force for him, and the pair part amicably. As Cable, Domino & Shatterstar leave, the protests grow violent, and Cable spots Pipeline & Hawkshaw abducting Renee. The three spring into action, and though Shatterstar's zeal causes him to be injured, they successfully rescue Renee & get Pipeline & Hawkshaw into custody. As Renee stays behind to work with the local authorities, she asks Cable to tells Charles she'll contact him soon. Later, Domino is watching the news and sees a story about a massive creature slaughtering people in the Rockies; upon seeing one of its footprints, Domino is shaken to realize it came from a man, not a creature, and one she considers a friend.

Firsts and Other Notables
After drawing issue #20 ahead of "Age of Apocalypse", Ian Churchill joins the series as its new regular artist this issue. He will stick around (with the usual assortment of fill-ins) through issue #39.

Picking up where X-Force #44 left off (there, Rictor decided to leave X-Force for a time, uncomfortable with the prospect of working telepathically with Cable), we see Rictor physically leave New York in this issue, with Cable stopping to see him off and assure him there's no bad blood between them. 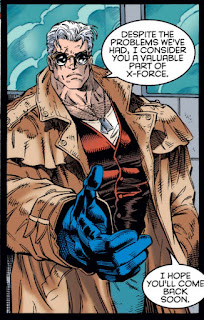 Renee Majcomb, the Genoshan rebel leader/bio-geneticist who debuted during "Bloodties", returns in this issue, having snuck out of Genosha to seek Professor Xavier's help. She'll pop up a half dozen times between now and "Onslaught", and eventually get sucked into the whole plotline with the post-Onslaught Xavier and the Mannites. 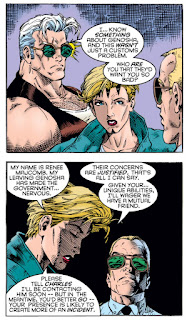 Pipeline & Hawkshaw former members of the Press Gang (the team of government operatives tasked with capturing Genoshans who have illicitly left the country) also pop up, attempting to retrieve Renee. 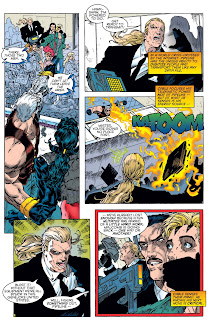 The issue ends with Domino shocked at the news of a man-monster killing people in the Rockies; this will turn out to be her and Cable's former Six Pack teammate, Grizzly, as Domino investigates the reports over the next few issues. 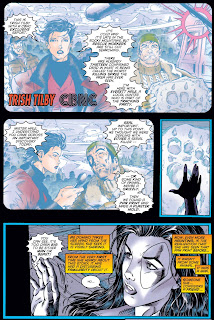 The Grim 'n' Gritty 90s
Cable’s casual look in this issue is very 90s: trench coat, mirrored sunglasses, vest over a white a-shirt. He also throws some shade at Gambit for always wearing a trenchcoat. 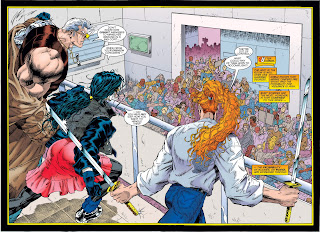 Also very 90s (or at least pre-9/11): non-ticketed people can congregate around departure gates, having emotional goodbyes with ticketed passengers. 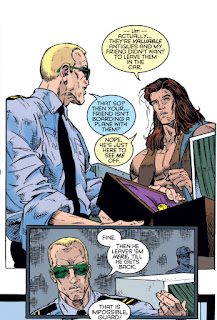 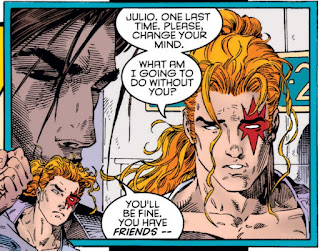 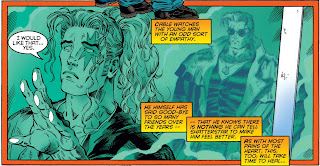 Austin's Analysis
Jeoh Loeb's apparent efforts to carve out his own little universe of titles within the larger X-universe continues here, as this issue follows on directly from X-Force #44, further exploring Rictor's departure from the team. It's the next step in Loeb's evolution of the series, which has seen the book transition from being off doing its own thing to one which interacts more directly with not only X-Force, but the X-universe as whole (and we'll see more of that in the months ahead). That aside, the rest of the issue features pretty standard "setup" material that plants the seeds for future plots (one of which - the Renee/Genosha stuff - will be explored elsewhere, while the other - Grizzly is murdering people for some reason - will continue next issue), alongside the continued evolution of Cable's character as someone who is both trying to care more & use his powers more. His presence at the airport is all about making sure Rictor departs on good terms, something he certainly didn't care about the first time Rictor left a team he was leading, and all the fighting Cable does this issue is done via his powers, and not with any weaponry, a notable development for a character chiefly defined for most of his existence by his fondness for ridiculously large guns.

Next Issue
Next week: Wolverine: Knight of Terra!