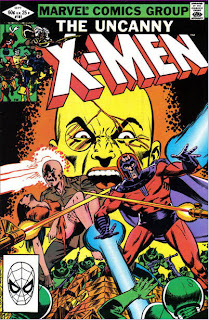 In a Nutshell
A flash back to the first meeting between Professor X and Magneto.

Plot
As Professor X struggles within his mind to overcome the alien evil growing inside him, the Starjammers' medic Sikorsky informs the X-Men that if Xavier loses the battle, he will die. Outside, Cyclops berates Storm for the incident at the Pentagon, pointing to an increase in anti-mutant sentiment in the government as a result. Storm rebuffs him, and he apologies, admitting that Xavier's condition is wearing on him. At his bedside, Lilandra tries to reach out to him, but Xavier's mind is reliving events from twenty years ago, in which he arrives in Israel to help psychiatric patients recovering from the Holocaust. At the hospital, he meets a young Magneto, calling himself Magnus, who is similarly working at the hospital, as well as a young woman named Gabby Haller. Xavier is able to telepathically help Gabby emerge from the catatonic state she entered as a protection against the horrors she suffered in the concentration camp. In the ensuing weeks, Xavier and Magnus debate the growing mutant situation while Xavier and Gabby fall in love, but one night the hospital is attacked by armored troops. 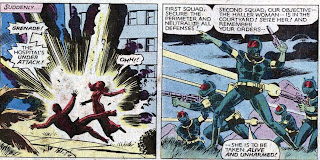 During the attack Magnus comes to Xavier's aid, revealing his magnetic powers, but Gabby is kidnapped by Nazi war criminal Baron Von Strucker. Gabby had unknowingly been programmed with the location of a secret cache of Nazi gold, with which Stucker hopes to fund his nascent terrorist group, Hydra. Xavier and Magnus track Gabby to Kenya, where Strucker discovers the gold. Together, the two mutants shut down Strucker and the rest of Hydra, rescuing Gabby, but Magnus departs with the gold, intending to put it to use in service of his own agenda. In the present, Xavier awakens, regaining consciousness because of Lilandra, just as Xavier had helped Gabby escape from  the horrors of her own mind. Lilandra and the X-Men celebrate Xavier's recovery aboard her starship, but the party is interrupted by Deathbird and the Brood, who quickly manage to capture the X-Men, intending to use them as hosts for their queen.

Firsts and Other Notables
The flashback in this issue depicts the first meeting between Xavier and Magneto, and establishes the notion that the two were once friends who disagreed over the best course of action for mutants regarding their relationship with humans. Magneto is also referred to as "Magnus" for the first time, though a series of retcons through the years will reveal this to be yet another pseudonym and not his real name. 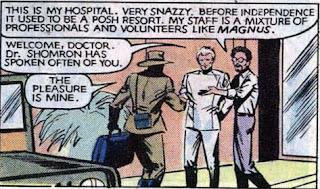 This issue is also the first appearance of Gabrielle "Gabby" Haller, an old flame of Xavier's who will eventually be revealed to be his baby mama and become a minor supporting character in he book. And, of much less significance, this is also the first appearance of Daniel Shomron, the psychiatric colleague of Xavier's who introduces him to Gabby. 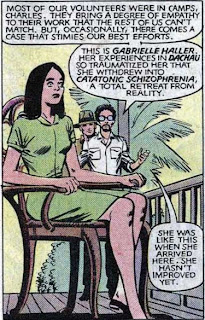 Deathbird and the Brood return, with the former declaring herself the new Shi'ar empress. Though the Brood stick around for the next several issues to wrap up their long running story, this is the final appearance of Deathbird in X-Men for quite some time. 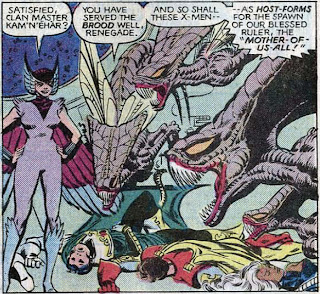 In the flashback, Xavier and Magnus face off against Baron Von Strucker, leader of the Neo Nazi terrorist group Hydra and an old Captain America foe. His children will later show up as minor X-Men villains. 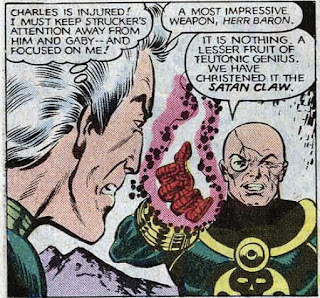 The events of the flashback in this issue will be revisited in the "Legion Quest" story, which kicked off the massive mid 90s "Age of Apocalypse" event.

It is worth noting that when the X-Men are celebrating with Lilandra aboard her ship (and are subsequently attacked by the Brood), both the Starjammers and Professor X stayed behind, while Carol Danvers is with them.

Jason Powell's analysis of this issue is another fantastic and insightful one, including observations about how Storm and Cyclops in the present could mirror Magneto and Xavier in the past, and that Xavier's power makes him naturally empathic with humanity, whereas Magneto's power only gives him a connection to cold, unfeeling metal, further cementing their respective positions. Give it a read.

Never one to pass up an opportunity to put my minor in German to good use, it should be noted that Xavier's line about how he can speak German (Ich sprechen Deutsch) is improperly conjugated. It should be "Ich spreche Deutsch", or even "Ich kann Deutsch sprechen".

A Work in Progress
Xavier emerges from the coma he's been in since issue #157, presumably cured.

Wolverine mentions that he and Cyclops are a lot alike. 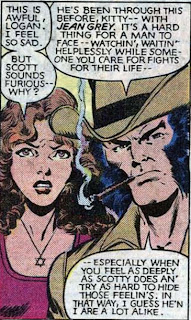 The burgeoning Storm/Cyclops friendship from issue #154 is touched on again, and the pair once more discusses who should be leading the X-Men. 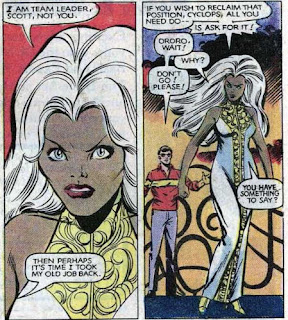 In the flashback, Xavier is arriving in Israel from Cairo, after his battle with Shadow King, picking up where issue #117 left off.

Meeting Magneto for the first time, Xavier notes that his mind is naturally resistant to his telepathy. 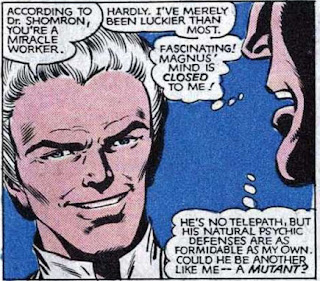 Strucker's Hydra soldiers are wearing odd helmets in this issue; I don't remember seeing them in other Hydra stories, though perhaps my Silver Age Captain America reading is simply lacking. 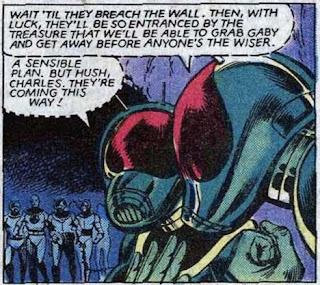 Magneto notes that in addition to magnetism, he can control other "natural" forces, which presumably accounts for how he's able to "magnetically" carry off all that Nazi gold despite gold not being, you know, magnetic... 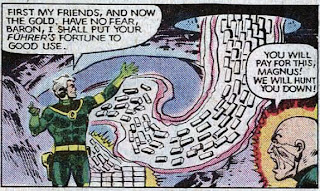 Though her story is left untouched this issue, Illyana's experiences from last issue are noted.

I Love the 80s
Putting aside the last bit about turning into gold (which ties into the plot of this issue), Xavier's journey through Gabby's mind makes for a striking depiction of the Holocaust. 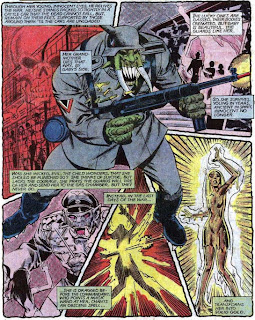 Xavier cures the catatonic Gabby using his telepathy, but I wonder how it looks to David and Magnus? From their perspective, Xavier is just staring at Gabby for awhile before she suddenly wakes up.

The Nazi's scheme involving hiding Hitler's gold in Africa and imprinting a map on a Jewish girl in a concentration camp seems unnecessarily complicated, even for Nazis in these kinds of stories. 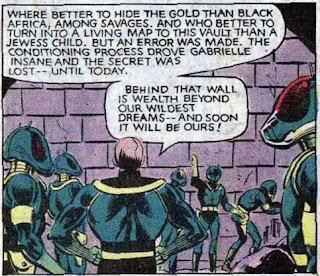 Needless to say, the events of the flashback in this issue occurring twenty years ago, specifically the notion that the Holocaust was then a "happened not that long ago" thing, have been massaged a bit by Marvel's ever-sliding timeline.

Claremontisms
Storm says to Corsair, "I do not ask this lightly", another favorite phrase of Claremont's. He also drops another "nigh irresistible" at one point.

In the flashback, Xavier uses his telepathy to turn Strucker's men against one another by manipulating their preexisting emotions towards and perceptions of each other, a pretty clever use of telepathy on Claremont's part.

Artistic Achievements
Cockrum and Wiacek turn in a gorgeous transition on this page, as the waterfall along the side carries our eye towards the bottom of the page. 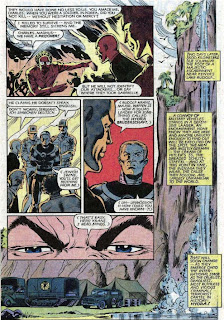 "Professor Xavier is a Jerk!"
Xavier scoffs to himself at Gabby's declaration of love, and decides, even though he doesn't love her, that both of them could use a little comfort. And that's a skeevy move even before we remember that she's technically his patient. 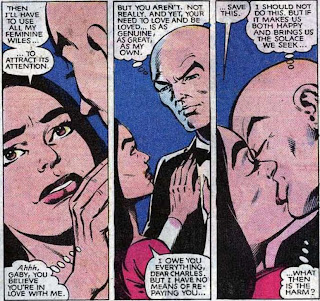 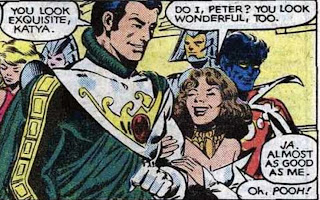 The Awesome and Terrible Power of Cyclops
Scott gets some good old fashioned (and well-depicted) angst in as he worries about losing Professor X. 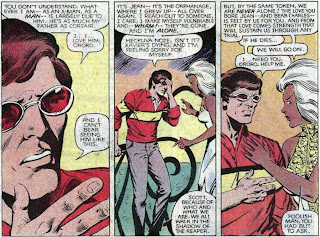 Human/Mutant Relations
In the wake of the X-Men's battle with Rogue inside the Pentagon in issue #158, the government is more convinced than ever that the X-Men are villainous outlaws.

For Sale
The 80s action movie classic/flop MegaForce is advertised on the back cover of the issue. 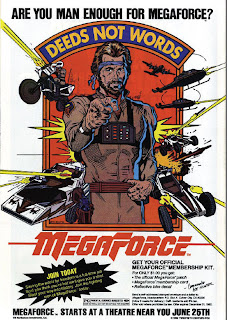 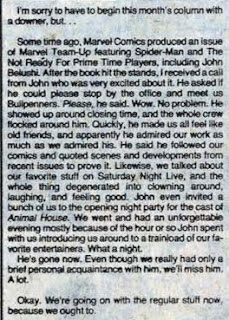 There are also mentions of Wolverine's limited series (which went on sale this month, and which we'll be covering a little further down the road), as well as a comic book adaptation of Blade Runner, which I've never read and, being a huge Blade Runner fan, would love to get my hands on someday. 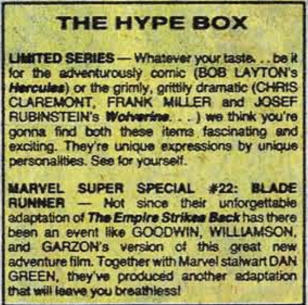 It's in the Mail
There's a letter, presumably from the creators, written as though one of the Elfquest characters is sending in a letter. 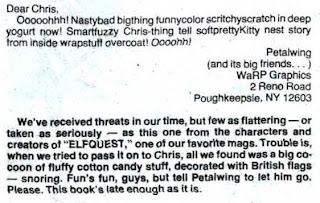 Just to prove some things never change, this issue contains a letter which the first paragraph of could have been lifted word for word from a message board today: 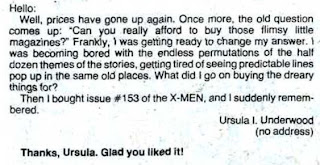 Teebore's Take
While the idea of Professor X and Magneto being old friends driven apart by conflicting beliefs in human/mutant relations has become a fundamental part of the X-Men mythos, aside from a few vague hints, that idea wasn't established until this issue. And it is a stroke of genius on Claremont's part, as it both continues the deepening of Magneto's character begun in issue #150 (his past as a survivor of Auschwitz, first established in that issue, is an important element of this story) and adds considerable dimension to the conflict between Magneto and the X-Men (even retroactively). For the way this idea will inform so many stories moving forward, and for the way it has been adapted in almost every take on the X-Men outside of comics, this becomes arguably the most significant issue in the title's history since "Days of Future Past".

But aside from the thematic and historical significance, this issue is also a cracking good read. It's incredibly dense, packing in a ton of story in its twenty-two pages. The centerpiece, of course, is the Magneto/Xavier story, a swashbuckling Indiana Jones-style adventure featuring the duo teaming up against Nazis. Before that, Claremont and Cockrum give us some excellent character moments, as Cyclops struggles with the notion of losing Xavier and his friendship with Storm is touched on again, and in the closing pages, with the Xavier/Magneto yarn completed and Xavier seemingly cured, they bring Deathbird and the Brood back with a bang, setting up the conclusion to that arc, as well as Cockrum's swan song on the book.