Force in Focus: The Mandalorian Episode 02 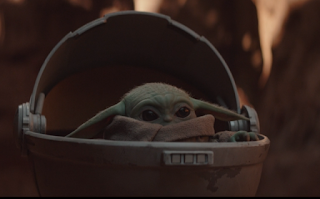 Plot
Returning to his ship with the child in tow, the Mandalorian is attacked by a group of Trandoshans. He defeats them, but when he returns to his ship, he discovers it being scavenged by Jawas. He pursues the scavengers, reaching the top of their sandcrawler before being blasted off it. The Mandalorian returns to Kuiil, who agrees to help him bargain with the Jawas. After some haggling, they agree to return his ship's parts in exchange for "the egg". This leads to the Mandalorian disturbing the nest of a massive horned creature, which brushes off most of his attacks & damages his armor. Just as the creature moves in for the kill, however, the child uses the Force to suspend the creature in midair, allowing the Mandalorian to get close enough to kill it. Retrieving the creature's egg, the Mandalorian gets his parts back and with Kuiil's help, restores his ship. After offering Kuiil a job crewing his ship (which Kuiil turns down), the Mandalorian blasts off into space, at which point the exhausted child awakens.

Firsts and Other Notables
After making its debut appearance at the close of the previous episode, this one properly introduces the Baby Yoda officially referred to only as "the child" (containing the series' avoidance of proper nouns, joining the ranks of "The Mandalorian" and "The Client"), the character currently taking the internet by storm.

I failed to mention it in last episode's review, but IG-11 made a reference to the Mandalorian being part of "the Guild". The Bounty Hunters Guild was a recurring element in some of the old Expanded Universe stories (including a Bounty Hunters trilogy that delved a fair bit into machinations within the Guild), and I believe that mention may represent a re-canonization of the concept.

As the Mandalorian bids goodbye to Tuiil in this episode, it made me wonder if this is the last we'll see of the character. Having him hire on as the crew of the Mandalorian's ship would have been an efficient way of keeping him in the cast, but perhaps he was only ever intended for these two episodes (and his comment about working hard to escape servitude is one of those great little tossed-off details that makes the Star Wars universe feel so lived-in; like, there's clearly a story there but it's not the story currently being told so we move on and leave it be). 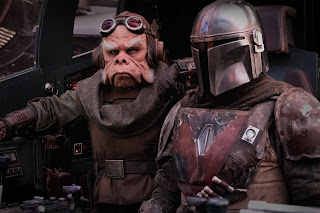 A Work in Progress
For what it's worth, the world this episode (and the climax of the first one) takes place on is called Arvala-7, and the Mandalorian's ship is named the Razor Crest.

The three beings who attack the Mandalorian in the cold open are Trandoshans, members of the same species as Bossk, the bounty hunter who appeared alongside Boba Fett and IG-88 on board the Executor in Empire Strikes Back. 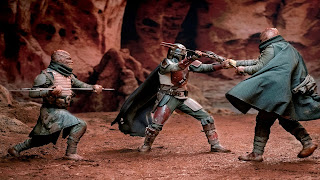 Jawas were previously established to be native to only Tatooine, but after their appearance on whatever world the Mandalorian picked up his bounty last episode and their significant role in the events on Avala-7 in this one, that's clearly no longer the case.

The Mandalorian has a flame thrower glove (and cable) just like Boba (and Jango) Fett.

The massive horned creature the Mandalorian fights is a Mud Horn (I initially thought it was a reek, the horned creatures Anakin & Jango Fett battled in Attack of the Clones, but it's something different).

Whether the reincarnated/cloned Yoda or not, the Child clearly shares Yoda's connection to the Force. 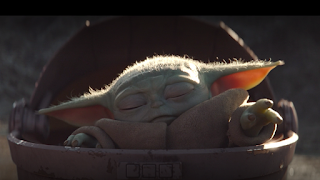 And for what it's worth, the Mandalorian seems puzzled by whatever it is the Child is doing, suggesting knowledge of the Force remains hidden/unknown in the post-Jedi universe (much as it was in The Force Awakens, where stories of Luke Skywalker and the Jedi were considered myths).

Did You See?
Shortly before the Trandoshans attack in the episode's cold open, shadows can be seen moving behind the Mandalorian (from the beings moving into position above him), and at one point, when he turns his head in response to some noise, they can also be seen reflected in his helmet. Just need little visual touch I missed the first time I watched the episode.

The Reference Section
When the Mandalorian is hanging off the side of the sandcrawler and the Jawas attempt to ram him into the enclosing wall of the valley, it's reminiscent of a similar scenario in Indiana Jones and the Last Crusade.

Austin's Analysis
If the first episode was all about atmosphere, this one focus on action. Characterization remains on the backburner - Pedro Pascal does an excellent job of making the Mandalorian feel like a real person, imbuing him with personality & making it clear how he's feeling about certain happenings despite the lack of facial expressions and limited dialogue, but we still don't know much about who this character is or even what he wants (it remains open to interpretation, for example, if he's keeping the Child alive out of affection/morality or simply to retrieve the higher bounty on bringing it back alive) - but this episode puts aside the first episode's atmospheric tone setting for nearly wall-to-wall action, from the Trandoshan attack to the assault on the Sandcrawler to the fight with the Mud Hornr. It's reminiscent of the original Clone Wars series, which, even in its longer episodes, would zero on a particular moment or series of moments in a character's plotline and spend an episode delivering all-out-action. As with the first episode, this kind of specific focus can't last forever - eventually the series will need to provide some sense of a larger plot and a better understanding of the Mandalorian's goals & wants, and "eventually" gets closer and closer to needing to be "now" with each passing episode. But if the series is establishing itself by focusing on a different piece in each episode (atmosphere in the first, action in the second) well, at least its doing so in highly entertaining & accomplished fashion.