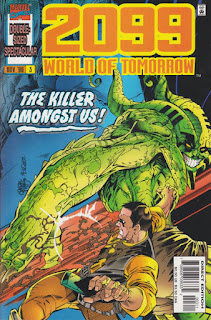 In a Nutshell
Mysteries deepen as Magus & Garokk reveal themselves!

Plot
Inside the alien ship beneath the Savage Land, Willow is consumed by the alien form she's adopted & attacks Winn. At the Last Refuge, an angry mob confronts the X-Men in the wake of the Fantastic Four's disappearance. It is quelled by the timely arrival of Victor Ten Eagles, who vouches for the X-Men. Inside Reed Richard's old lab, Cerebra discovers a young girl named Maddie, and Franklin, the child-like robot Richards was working on before he left. At Fatherland, Spider-Man is brought before Doom, who explains he is aiding the Phalanx only long enough to turn their techno-organic code against them, and enlists Spider-Man's help. On Mars, Metalsmith & December enlist the colonist's to help them find Twilight, but are rebuffed. Below the Savage Land, Dr. Strange fights off a group of Mole Men, before going deeper in search of the source of the attacks. Outside the Last Refuge, Morphine Somers tries to enlist Victor Ten Eagles in his bid for power, and though he refuses, a human observer believes that Victor & the mutants are conspiring against humans, and runs off to warn everyone.

On the Wild Boys' ship, Uproar is forced to fight Wulff, who has transformed into a massive dog-like creature. He manages to get through to Wulff, and together, they trash the arena, until a woman named Fiona arrives to help them escape. Back in the alien ship, Nostromo forces Willow to transform back to her original form, but the effort leaves him suspended in a techno-organic cocoon. In the Fatherland, Doom & Spider-Man are confronted by the Phalanx' emissary, who turns out to be Magus. On Mars, Dr. Isaacs helps Metalsmith & December leave the colonists' compound, but they are attacked by unseen assailants. Inside the Last Refuge, Cerebra detects a mental presence inside Franklin, but when she probes his mind, she is knocked out. Below, Dr. Strange finally reaches the source of the attacks: Garokk the Petrified Man!