Force in Focus: The Mandalorian Episode 01 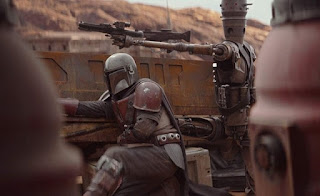 Plot
After successfully completing a round of bounty hunts, an unnamed Mandalorian accepts his next, higher-paying, job from Greef Carga. Meeting with the client, the Mandalorian receives a tracking fob to locate his quarry and a block of beskar steel as down payment. He brings the beskar to a Mandalorian armorer, who fashions it into a pauldron for the hunter adds to his armor. Later, the Mandalorian lands on a desolate planet. He encounters the diminutive Kuiil, who agrees to help him reach his destination. But first, the Mandalorian must tame a blurrg mount. After doing so, he ends up overlooking a fortified camp where his target is being guarded. Another hunter, the droid IG-11, is after the same target, and the two hunters agree to team-up. Together, they fight their way into the camp and reach their bounty, a small green infant with long ears. IG-11 is prepared the kill the child, but the Mandalorian blasts the droid to take it for himself.

Firsts and Other Notables
Obviously, this first episode of Disney Plus' marquee launch series introduces a bunch of new characters into the Star Wars universe, most notably its titular protagonist (it remains to be seen how many of the other characters appearing here will be significant or limited to this episode).

The title character remains unnamed on the show; the actor playing him has given his name in interviews, but I will refrain from using it until it is confirmed as such in the context of the show.

It's not made explicit in this episode, but the show is set sometime after Return of the Jedi and the fall of the Empire (Werner Herzog's character speaks of restoring order, a common trope spoken amongst ex-Imperials in post-Jedi stories, and the Mandalorian is reluctant to accept Imperial credits for his bounties, as they have lost value).

The big episode-ending cliffhanger reveals that the bounty driving the plot of this first episode is an infant (albeit a 50 year old one) of the same species of Yoda. Somewhat infamously, very little information exists about Yoda's species (including its name), with only the existence of Yaddle (if two can count as a "species") on the Jedi Council in The Phantom Menace confirming he's part of a unique species (and not just a mutated or otherwise atypical member of an existing species). Presumably, that stands to change with the inclusion of this character in this series.

Casting Call
The Mandalorian is played by Pedro Pascal, most well-known for his roles on Game of Thrones & Narcos.

A Work in Progress
The tiny bit of backstory presented for the character comes in the form of brief flashbacks to (presumably) his childhood, in which he was separated from his family during a firefight. It's also established that he was a "foundling", and is pleased that the proceeds from his latest bounty will help more foundlings (suggesting there is more to the character than simply wanting highly paid bounties for his own personal gain).

We also know he doesn't like droids, though the exact reason (if there's a specific one and not just a general distrust) is unknown.

Jawas are seen amongst the various denizens of the planet where the Mandalorian does his business, which is, I believe, the first time they've been shown to live somewhere other than Tatooine.

The client uses "parsec" to describe a section of the galaxy; Han Solo famously made the Kessel Run in less than 12 parsecs (which seemed to be a unit of time but we've since learned is actually a unit of distance (ie he flew a shorter, more dangerous, route), which is somewhat consistent with how its used here).

The ill-tempered dewback-esqure creature the Mandalorian must tame is called a Blurrg, appearing here for the first time.

Kuiil says that the Mandalorians once rode Mythosaurs

Did You See?
The Mandalorian's spear rifle weapon seems like a deliberate homage to the weapon wielded by Boba Fett in the animated portion of the Star Wars Holiday Special. 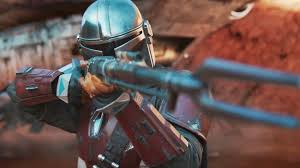 Speaking of, "Life Day", the Wookiee holiday which is loosely attributable to some combination of our Thanksgiving & Christmas holidays, gets mentioned in passing.

The droid which greeted the Mandalorian outside Werner Herzog's office was similar to the gatekeeper droid employed by Jabba the Hutt in Return of the Jedi.

Also, Kowakian monkey lizards, the species to which Jabba's cackling pet Salacious Crumb belonged, are seen being spit-roasted on the streets.

Kuiil is an Ugnaught, one of the porcine-like aliens who worked at Cloud City and oversaw Han's carbonite freezing.

What's the Deal With Beskar?
Beskar, the Mando'a term for what is elsewhere called "Mandalorian iron" is a super-resistant form of steel forged by Mandalorians, capable of deflecting most blaster bolts and even lightsaber blades (though sustained contact with a lightsaber can damage it). The Mandalorians, who have history of fighting with the Jedi, use it in their armor and forge bladed weapons with it as well. It was introduced back in the old Expanded Universe early in the run of Dark Horse comics, was also referenced in the animated Rebel series (which brought it into the new canon).

Austin's Analysis
The Mandalorian is, at least in this first episode, all about creating atmosphere. The Star Wars universe has never shied away from leaning into its Western influences, but never has it leaned into those influences as hard as it does here. While the characters are thin on the ground (its still-textually-unnamed title character is little more than a collection of Western tropes in Boba Fett armor, though some of the fringe characters are, in their brief time, more sketched in, with Horation Sanz's Mythrol entertainingly walking the line between fear & acceptance and Werner Herzog being Werner Herzog-y), the atmosphere itself is really the main character of this first episode, as the titular bounty hunter goes about his business, gets in bar brawls and makes backroom deals, tames a wild steed to cross a treacherous wasteland, surveys a frontier output before engaging in a laser-fueled shoot 'em up (alongside a sentient murder robot). The Star Wars elements are there (the iconic Mandalorian look, familiar aliens, dirty Stormtroopers, talk of parsecs), but it's really only in the closing moments that the balance between those elements and the Western ones fall back into equilibrium, as the Mandalorian looks into the eyes of a bright green baby Yoda.

As an ongoing series, this can't coast along on atmosphere alone forever. Embracing the Western elements are great, but eventually, the series is going to need to develop its characters, world, and themes into something more than "like a Western, but in the Star Wars galaxy". But for an introductory episode, one which, more than anything, intends to make a strong statement about the kind of show its going to be and which corner of the vast Star Wars universe its going to claim as its own, this is a remarkably confident and accomplished piece of television.