Force in Focus: The Mandalorian Episode 03 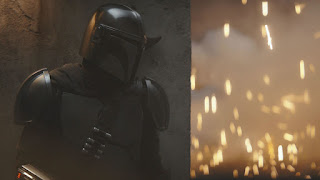 Firsts and Other Notables
A bit more on Mandalorian culture and their current state of being gets established in this episode, with the Great Purge (first mentioned in episode one) getting some additional details: not unlike the Jedi Purge, it involved the Empire coming down hard on the Mandalorians, gaining control of their stores of Beskar metal, scattering the survivors of the purge and driving them into hiding (it's said in this episode that this particular group, called the Tribe, only go out in public one at a time, so as to hide their numbers. At least until the end of this episode). 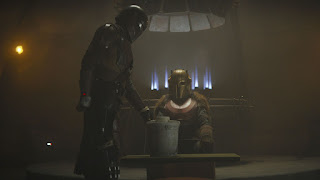 It's also said that a Mandalorian never takes off their helmet, which makes you wonder how they sleep and/or eat.

The Mandalorian who confronts the, uh, Mandalorian in the armorer's workshop, then later leads the effort to help him escape whilst wielding a massive Gatling gun-esque blaster is named, per the credits, Paz Vizla; Clan Vizla is one of the great Mandalorian houses, and Pre Vizla was a notable character in the Clone Wars series. Leader of the Death Watch, a group which sought to overthrow the ruler of Mandalore during the Clone Wars and restore the warrior heritage of the Mandalorians, Pre was eventually killed by a resurrected Darth Maul. It's unclear how, if at all, Paz is related to Pre, but both are voiced by Mandalorian creator Jon Favreau.

Mandalorians launching into the air and flying around with their jetpacks while fighting is one of those things we've seen a few times in Clone Wars and Rebels, but it's still super cool to see it rendered in live-action.

A Work in Progress
The New Republic gets name-checked for the first time, and is summarily laughed off as any kind of legitimate authority/enforcer of the rules (not unlike how the old Republic was similarly dismissed when Qui-Gon and company landed on Tatooine in The Phantom Menace, which of course speaks to the complacency of the New Republic that led to the rise of the First Order in The Force Awakens).

Lots of offhand references to Bounty Hunter Guild rules in this episode: don't ask what happens after a bounty is handed over to the client, go back on a contract, etc.

In another brief flashback to, presumably, the Mandalorian's childhood, we see his family being specifically menaced by the Super Battle Droids used by the Separatists starting in Attack of the Clones and throughout the subsequent Clone Wars. 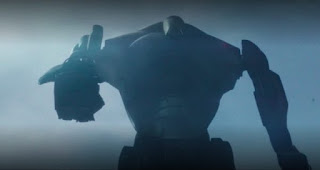 Speaking of droids, that's an interrogator droid, the same one Darth Vader used on Princess Leia in A New Hope, hovering over the Child when the Mandalorian busts in.

For what it's worth, the Child is a he; Dr. Pershing uses that pronoun in reference to him.

Did You See?
The Mandalorian receives his Beskar payment in a camtono, aka the Ice Cream Maker made famous (infamous?) by Willrow Hood in The Empire Strikes Back, the man seen evacuating Cloud City with one under his arm, inspiring an action figure and a cult following amongst fans, including a group of cosplayers dedicated to the character.

Any Questions?
Is the Child a Yoda clone (being 50 years old, the Child's birth roughly coincides with the Clone Wars)? Is Dr. Pershing/the client attempting to clone the child (Pershing is clearly no Kaminoan, but his uniform does share their sigil)? Or just extract the midichlorians from the Child? Would modern Star Wars dare raise the specter of that most hated corner of the Star Wars universe? 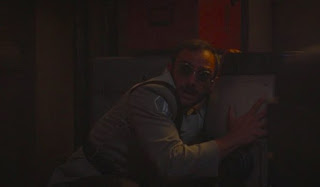 Did the Mandalorian intentionally shot Greef Carga where he knew he kept his iPhone-sized slab of Beskar, or was that just a lucky break for Greef?

Austin's Analysis
This is, without a doubt, the most balanced episode of the series thus far. Where the first two episodes focused on specific narrative elements (atmosphere in the first, action in the second), this one covers multiple areas: characterization, plot development, action, even a bit of world-building. As a result, it is the first episode of the series to truly feel like both a traditional episode of TV (as opposed to a tone poem and a series of action set pieces) and to suggest what this series could look like on an episode-by-episode basis (the Mandalorian goes from world to world along with Baby Yoda, trying to make ends meet while also avoiding the forces set against him by his act of mercy in reneging on his bounty & rescuing Baby Yoda, making the hunter now the hunted, etc.).

Much has been made (and rightly mocked) of the notion (often espoused by their creators in interviews) that streaming shows aren't seasons of TV, they're really "just one movies divided into X parts", and while it remains to be seen if that approach was taken for the entirety of The Mandalorian's eight inaugural episodes, this particular episode almost feels like the conclusion to a series pilot, and in retrospect, it's not hard to imagine a world in which these first three episodes were released as a 90 minute "TV movie" pilot - which, unlike the whole "it's one movie told in X parts!" approach, is possibly the most traditionally old-school TV thing possible.