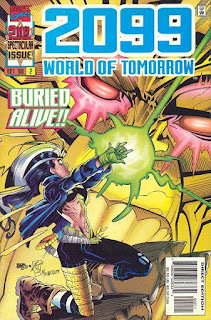 In a Nutshell
The Fantastic Four return home while Twilight is captured on Mars.

Plot
Spider-Man awakens in a strange place, and is welcomed to "Fatherland' by a former acquaintance named Xina. Meanwhile, the X-Men assist Mr. Fantastic in building a device to research all remaining data in the world. When its discovered that the Negative Zone portal in New York is still active, Invisible Woman & Human Torch suggest they could all go home. Nearby, the jungle expedition team explores the crashed alien ship, triggering an alarm which traps them inside it, while deep underground Strange battles a creature named Umi. On Mars, Father Jennifer, December, Twilight & Metalsmith are taken into the Mars colony, and learn about the Takers. Back on Earth, the captive Uprorar & Wulff are forced to fight in the Wild Boyz arena. At the Fatherland, Xina explains how she is researching the techno-organic virus. When Spider-Man asks about Uproar & Wulff and learns they are captives in the contaminated zone, he breaks the rules to go after them. In the crashed alien ship, Willow takes the form of one of the deceased aliens, releasing them, but then reveals she can't change back. Back in Last Refuge, Human Torch & Invisible Woman decide to leave Mr. Fantastic behind and head to New York, while on Mars, Willow is captured by the Takers. Back on Earth, Mr. Fantastic comes to his senses and joins his family in New York, where they enter the Negative Zone portal hoping to return to their time.