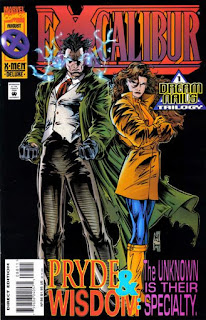 In a Nutshell
The "Dream Nails Trilogy" begins as Pete Wisdom & Kitty investigate the death of  a friend & colleague of Wisdom's.

Plot
After Wisdom receives a message from an old friend & Black Air colleague named Culley begging for help, he asks Brian to use the Midnight Runner to go to London. Brian is reluctant, but agrees when Kitty offers to fly Wisdom there. Later, Moira discusses the hacking of her files with Professor X, while Kitty & Wisdom arrive in London. They go to Culley's bolthole and find the place ransacked. On Muir Island, Brian completes work on a new facility involving lasers for Rory, who intends to use the room to help treat the captive Spoor. In London, Kitty & Wisdom visit the favorite pub of the British Intelligence community, and learn that Culley had recently been stationed at the Dreams Nail air base, and also that he is dead. On Muir Island, Moira continues her research into the Legacy Virus, while in London, Wisdom & Kitty examine Culley's body, which has been ravaged by a strange disease. Leaving the morgue, they're attacked by a hit squad, and after working together to take out the shooters, Kitty & Wisdom discover the would-be assassins are agents of Black Air.

Firsts and Other Notables
This issue kicks off the "Dream Nails" trilogy, a three issue story that drops Pete Wisdom & Kitty into an X-Files-ish paranormal conspiracy involving Black Air (the organization which has replaced WHO and which is Wisdom's ostensible employer). Ellis apparently likes the formalized "trilogy" label for his stories, as this follows on from his introductory "Soul Sword Trilogy" story. As with that "trilogy", the art on this story will be something of a mixed bag, with the artistic team changing from issue-to-issue and sometimes page-to-page (former X-Factor artist Larry Stroman draws most of this issue, but he's certainly not alone).

Brian builds a "laser room" for Rory Campbell this issue, something which he intends to use on the captive Spoor (the former Acolyte last seen in issue #74) for a dubious form of therapy (basically, the idea is that the room targets hostility and hits the hostile person with lasers; this will, I guess, rob Spoor of the sense of control he believes he has by virtue of being a homicidal maniac). All of which is just setup for Rory losing a leg and thereby becoming more like Ahab. 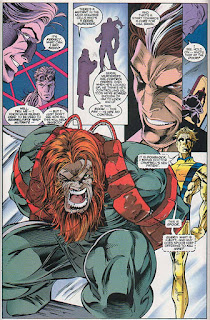 Moira's mentions in this issue that three separate strains of the Legacy Virus have been identified; this will be used to help explain some of the inconsistencies in the depiction of how the virus works/manifests itself/kills its victims (ie sometimes it causes lesions to form, sometimes it kills the afflicted by supercharging their powers, sometime it doesn't, etc.).

A Work in Progress
Brian has entirely lost his faux-Shakespearean "Britanic" dialect at this point.

Moira speculates that whomever hacked her Legacy Virus information to leak to the press, didn't have to do so from Muir Island, since her system was connected to Xavier's, and Xavier's system was blown up (by Banshee) during "Phalanx Convenant", meaning anyone could have used the now-open uplink on his end to access her data. 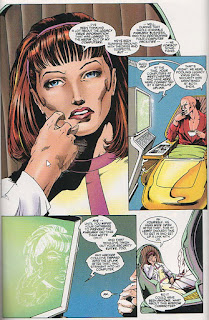 Wisdom gives Kitty a lesson in British dialects (something you'd think she'd be more familiar with given that she's lived in Britain for awhile now). 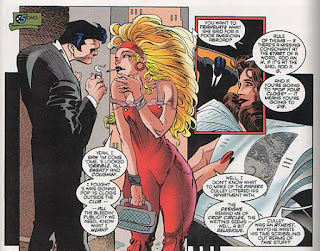 Artistic Achievements
Larry Stroman pencils at least part of this issue, which means we get some of his patented weird faces on background characters. 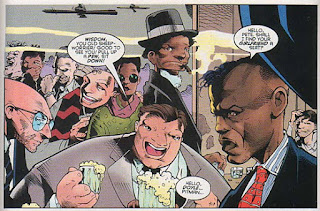 It's in the Mail
A response to a letter in this issue announces Wolfsbane upcoming appearance in the series.

Austin's Analysis
Ellis' attempt to riff on the X-Files, the story that begins in this issue also serves to integrate Wisdom into the cast of the book, and in doing so, setup the kinds of stories Ellis will be telling during his run. Introduced in issue #86 (just ahead of "Age of Apocalypse") as an outsider foisted on the team, Ellis clearly has an affinity for the character, and begins here to make him a more accepted member of the group (while also paving the way for a Wisdom/Kitty romance). The story itself, at least in this first issue, is fine. It's pretty standard X-Files-ish stuff (mysterious deaths, shadowy government operations, secret airbases and hints of alien activity) and Stroman's quirky style (on the pages he draws, at least) fits it well, as appropriate for this kind of darker fringe-y story as it was for the more sitcom-y stories of Peter David's X-Factor.

But while the story beats may be familiar (especially now, if not as much in 1995), they point the way forward for Ellis' Excalibur run, as he'll use the book to explore the dark underbelly and hidden corners of, it not the X-universe at large, at least Excalibur's piece of it. The seeds of this direction were planted in the earlier Genosha story (where Excalibur was investigating the newly-retconned secret at the heart of Genosha), which at least retroactively adds a little more relevance to a two-parter that seemed largely disconnected from anything concerning Excalibur, and though it breaks a bit from the established "Excalibur as Moira's scalpel" or whatever that was established in issue #71, Ellis' take is at least not entirely devoid of precedent, as Excalibur has long had a close relationship with Black Air's predecessor WHO (particularly during the Alan Davis run). So as this story begins the proper Ellis-ifcation of the series, it works to everyone's advantage that his particular tastes, however coincidentally, at least have some overlap with the history of the book, helping make the new direction beginning her feel a part of the whole.

Next Issue
Tomorrow, Cable #22. Next week, Wolverine: Knight of Terra.