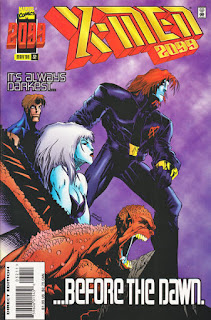 In a Nutshell
Foolkiller attacks the Lawless.

Plot
Years ago, the Lawless defeat the last of the Foolkillers in New Hope, Texas. Meanwhile, in Halo City, a new Foolkiller kills a young mutant while former Lawless members Auntie Maim & Mongrel arrive in the city to meet with Xi'an & Victor Ten Eagles. Victor tells them of his narrow escape from the Foolkiller, while the Foolkiller meets with a scientist warning of imminent ecological disaster for the city. Meanwhile, Krystalin & Meanstreak are reunited with Metalhead & Bloodhawk, and meet Rosa's son, Joachim, who has also drawn the attention of Bloodsmith. Back at Xi'an's church, the former Lawless formulate a plan to draw out Foolkiller. While Luna confronts Book, hoping to find more information about her relationship to Brimstone Love, the Lawless set their trap, but end up catching a lookalike, after which the real Foolkiller attacks & kills Mongrel, after which Xi'an declares its time for the Lawless to deliver judgement on the Foolkiller once and for all.