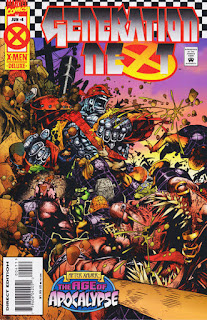 Plot
As Mondo tries to escape the Core with Illyana, Sugar Man confronts Husk & Vincente, still posing as Quietus. Though they've seemingly killed Chamber as Sugar Man ordered, he remains suspicious, and attacks, injuring Vincente and forcing Husk to drop their ruse. Sugar Man orders them killed, but just then, Chamber appears, having used his psionic powers to make it look like he'd been shot, and blasts Sugar Man, seemingly killing him. As a fight breaks out between the guards and Generation Next, Colossus appears & orders Skin & Chamber to help Mondo escape with Illyana. But a still alive Sugar Man overhears him, and kills Mondo, forcing Illyana to emerge from inside him. Colossus proceeds to pummel Sugar Man seemingly to death, but the rest of his students are overrun by guards. Colossus orders Shadowcast to phase him and his sister out of the Core, promising to come back for the kids, but as he races back inside, the facility goes into lockdown, and he's unable to get inside before the doors close, leaving the kids stranded. He returns to the waiting Shadowcat & Illyana, telling them he did everything he could, not realizing that Sugar Man escaped with him.

Firsts and Other Notables
This issue: everyone dies! Seriously, almost, as the entirety of Generation Next dies or is left to die in the Core, with only Colossus & Shadowcat escaping (with Illyana), after Colossus orders Shadowcat to get the three of them out, then is unable to get back inside to help his students. 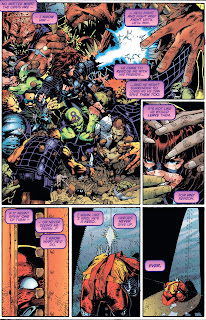 In the closing panels, Sugar Man is revealed to have survived and escaped the Core, shrunk down in Colossus’ boot. He will return in X-Men Omega (and then, of course, in the prime reality). 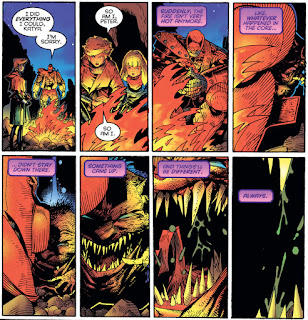 The Grim 'n' Gritty 90s
One of the guards in the Core has an especially 90s cell phone. 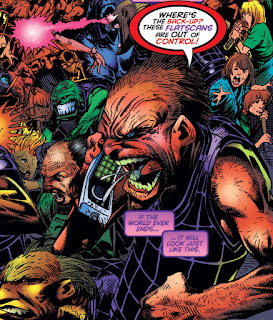 Chris Bachalo on Redesigning Newly-Designed Characters for "Age of Apocalypse"

"I know that Marvel wondered about including Generation X in the whole 'Age of Apocalypse' storyline because it was a new title. If I recall, I wasn't in favour of it, but they decided to go ahead with it anyway. With hindsight, I can see it worked out really well. To this day, there are basically two things that I'm famous for - Generation Next and Death. I think those books will be my legacy. Bob Harras was really cool because I had ideas for Generation X that he didn't want to use, and he said I could use them in Generation Next. I was sold. The uniforms in Generation Next were the colours that I wanted them to be and the characters were closer to how I had originally envisioned them. I wanted to be really aggressive with it as well. Worked out well."

Austin's Analysis
Even for "Age of Apocalypse", this is a dark & devastating issue, with the team technically succeeding in its overall mission of rescuing Illyana from the Core, but at the cost of the lives of the vast majority of the students. That the only survivors are the teachers who were ostensibly responsible for their charge's safety is, of course, just one more turning of the alternate reality screw, as even within the context of this altered universe, we're familiar enough with the beats of these kinds of stories to expect, despite the overwhelming odds against the kids, something to come along at the last minute to save them - Colossus, Magneto, someone. But in the end, all Colossus can do is watch as his students are overrun and killed, all because he (rather stupidly) put his sister's life ahead of theirs (there's no good reason Shadowcat couldn't have gotten Illyana out while he stayed behind to help).

It stands as the culmination of what is on the whole one of the darker & more well-realized AoA series. It's a little thin in the middle - it feels like a three issue story stretched into four - but Bachalo is on point throughout, packing each issue with little details & artistic flourishes (all the more impressive considering he just got done designing the look of the series a few months prior), while Lobdell strikes the right balance between dark humor & grimness, letting things be appropriately dark & despairing but still entertaining to read, right up to that gut-punch of a finale.