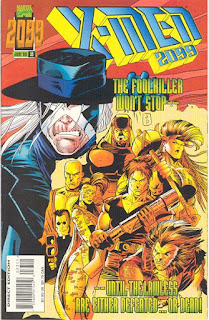 In a Nutshell
The Lawless defeat the Foolkiller.

Plot
The remnants of the Lawless converge on the Unicelo factory where Foolkiller is holding Mongrel as bait. Their attack is joined by Krystalin, helping out despite Victor's protestations. Elsewhere, Sham is entertaining Rosa's baby when a pair of demons enter Rosa & Metalhead's apartment. At Unicelo, Krystalin summons the rest of the X-Men as Foolkiller reveals he has a bomb wired to his chest; if he dies, it detonates. At the Archive, Luna presses Book for more information about her family until she leaves in response to Krystalin's alert. As Meanstreak responds to the alert, he encounters the zoomers again, and in trying to outrun them, disappears. Across the city, Sham & Metalhead attack the demons, after which Vulcann the Bloodsmith appears, telling Rosa he wants her child. Back at Unicelo, Luna uses her power to force Foolkiller to re-experience his traumatic childhood, incapacitating him. Determined to prove he's become a better man, Xi'an then approaches Foolkiller, gambling he won't detonate his bomb and offering him a second chance at life. But Foolkiller says that to take it would mean his life as a Foolkiller was a mistake, making him the biggest fool of all, before detonating the bomb.