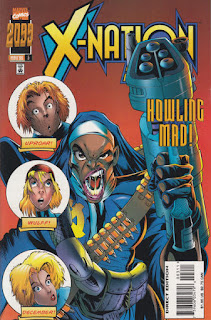 In a Nutshell
X-Nation heads to Florida to rescue Willow.

Plot
The Sisters of the Howling Commandments prepare to head out to rescue Willow from Avian, but are stopped by Halo City administrator Lucius Drayn. Their efforts stymied, the kids return to the Xavier Shelter and plan their own rescue. Twilight is reluctant to join in, but after hearing December tell how she met Willow as a captive of the Million Palms resort, she agrees to join the group. Meanwhile, at the ocean, the Atlantean warlord Attuma rallies his troops. At the shelter, Cerebra continues his search for the mutant messiah, while the kids steal the Sister's battle station wagon for their rescue mission. Later, Cerebra unsuccessfully tries to recruit Xi'an to help give the kids a sense of purpose, then follows a strange psionic presence to a man who calls himself Exodus and claims to be the future of mutantkind. Meanwhile, the kids arrive in the skies above Million Palms, but are quickly spotted by Avian and shot down. Captured, they are fixed with power inhibitors. Nostromo is able to overpower his inhibitor, but when he tries to escape, he is shot in the chest by the guards.