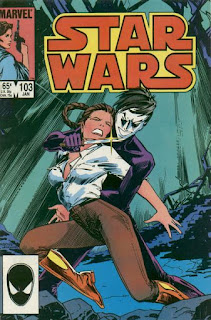 In a Nutshell
Leia forms a bond with a Nagai prisoner named Tai.

Plot
As Den Siva ruminates over a hologram of Dani, wondering where she is, he's sent for by Knife, who informs him of a lack of communication with a squadron sent to the largely-abandoned Trenwyth system, and his concern that the squadron was taken out by an old enemy. Meanwhile, Princess Leia, accompanied by her four Zeltron attaches, emerges from hyperspace near Trenwyth. On their way to Zeltros, they are forced to land when their ship's stabilizer is hit by a stray blast. Looking for parts to repair the ship, they explore the wreckage of a battle & encounter an injured Nagai pilot, whom they take captive. Leia attempts to interrogate him, but he remains silent; she suspects he is of a lower caste from the other Nagai they've encountered and doesn't know her language. As Leia & the Zeltrons work to repair the ship, they also observe additional troop movements involving forces unknown to them, and Leia decides to ultimately release the captive Nagai, despite his efforts to attack them & escape. This act of compassion from Leia stuns the captive, and for the rest of his time with Leia, he is less a captive than a companion. When the repairs are complete, Leia prepares to leave the prisoner behind, with the necessary equipment to contact his people. He then breaks his silence to tell her his name is Tai. Later, Tai is retrieved by the Nagai, and taken before Knife & Den. A Wing Leader who participated in the battle on Trenwyth, Tai tells them of how Leia sheltered him from their common enemy before ultimately releasing him. Knife views Tai's acceptance of Leia's mercy an act of weakness and hurls a knife at him, killing Tai.

Firsts and Other Notables
This is the final issue of the series to be published monthly; it's remaining four issues were released on a bi-monthly schedule (every other month).

Though they go unnamed, this represents the first appearance of the Tof, a new species that will comprise a fourth faction in the Alliance-Nagai-Imperial war, one which will ultimately lead to a "the enemy of my enemy is my friend" scenario that unites those factions against the Tof. 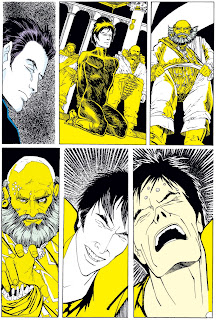 To that end, it's established here that the unnamed Tof are old enemies of the Nagai, and are said to be even worse in their actions. Tai is shown to experience memories of being held captive & beaten by the Tof.

This issue reveals that both Den & Knife are still alive & recovered from their last encounters with Imperial forces.

A Work in Progress
It’s suggested in this issue that the Nagai are naturally more stronger than average species. 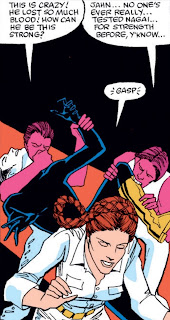 It's in the Mail
A letter in this issue's letter column asks the question that has bedeviled cosplayers for years: how does Luke's lightsaber stay attached to his belt in a way that also enables him to remove it one-handed, without working any kind of clasp or hook mechanism? The letter writer speculates it's via some kind of special hook (then adorably asks, if that is the case, if he can buy some from Marvel, as if Marvel would have access to either a real-world version of a fictional tool or the real-world movie prop version of the same), but the response suggests velcro (I'm pretty sure, ultimately, the answer is "magnets"). 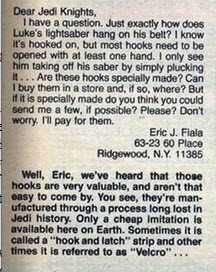 Austin's Analysis
This is issue is a great example of how to do a done-in-one story which also advances a larger ongoing narrative. The immediate plot - of Leia and the Zeltrons crash landing on a planet & encountering a Nagai survivor - is introduced and resolved entirely in the course of this issue's pages (with a bittersweet conclusion that gives the immediate narrative a bit of emotional heft), but at the same time, the events depicted therein work to advance the larger story arc involving the Alliance's war with the Nagai, restoring two recurring characters to the scene, introducing a potential new faction into the conflict via the mysterious foes the Nagai fought in the Trenwyth system before Leia arrived, and building out the culture of the Nagai through Leia's interactions with the captive survivor (and the fate of that survivor upon his return to his people).

This is also maybe the best Duffy has written Leia yet; while the four male Zeltrons as characters are largely interchangeable (and largely exist only in relation to Leia), Leia is finally starting to see their value & move past her irrational and out-of-character dislike of the Zeltrons as a species. At the same time, her treatment of the Nagai prisoner in this issue is classic Leia, equal parts compassion & pragmatism. All in all, it's a strong issue which tells a complete story, advances the larger narrative, and proves a long-overdue Duffy-penned showcase for Leia.

Next Issue
War comes to Zeltros!