Is there a prison
Big enough, strong enough
To hold the Cobra Commander?
We're truly getting into "Classic G. I. Joe" territory here, with an early Mike Zeck cover for the comic, the official Sunbow voice actors and character models, and fan-favorites like Duke and Storm Shadow receiving the spotlight. (Note Hasbro's still pushing the idea these are honest-to-goodness ads for the comic and nothing else, with yet another "open the page" gimmick attached to the cover.) 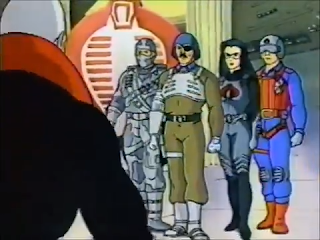 For fans of the animation, this is the first time Baroness appears in the black leather outfit that's become her iconic look. The initial animated miniseries had her in a blue outfit similar to what she wore in the early issues of the comic. There were no plans to make a Baroness action figure early on (Hama created her while scripting issue one in order to give Cobra at least one operative with a naked face), but now that she's receiving a toy, everyone's falling in line with the new design. (When it next appears on the show, it's designed to be truly black with white detail outlines, a touch I've always appreciated.) 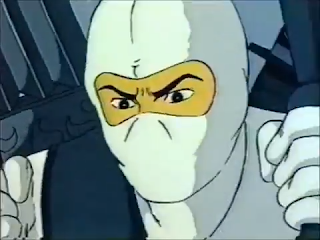 It's one of the nicest-looking ads, dropping the generic desert battlegrounds for an arctic environment and presenting some well-choreographed action in just a few seconds. It's possible this version of the ad was preserved digitally and that's influencing the way I'm looking at it, but the colors here really do look digital to my eyes. I'm not sure how far that technology had come by 1984 (Disney doesn't have a full-length feature digitally colored until 1990), but the colors here are so bright and clean I have to wonder. 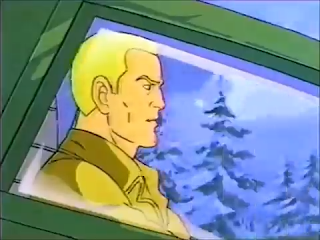 The previous issue of the comic had Cobra Commander apprehended in Europe, setting him up to be rescued by Cobra here. This didn't feel true to Hama’s characterization, which always has the Commander above the fray. This issue, he's in place to fulfill what's required of the commercial. The Sky Hawk and Cobra CLAW debut here, with the comic incorrectly leaving the Sky Hawk colored white.

Hama's also expected to introduce a makeshift Joe base, perhaps intended to be the Headquarters Command Center. It's not in the commercial at all, but still must appear in the comic. (Hama does have Cobra Commander point out the strategic flaws in its design, however.) 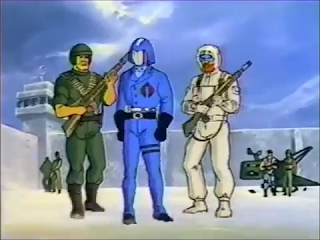 Perhaps the most significant aspect of the issue is Russ Heath's appearance as the last-minute fill-in guy. Heath designed the models you see in the cartoon (and now the commercials...I'm not sure if he always did the designs for the ads, but now that they match the cartoon, they're clearly Heath's work.) The look of the comic often didn't match the more "official" designs of the cartoon, but it's fun to see the real Joe look recreated within the comics. (Cheap printing and dingy yellow paper notwithstanding.)

Hey, my continuation of the Sunbow series is still available for free over at Smashwords. And I'm very close to my goal of fifty Amazon reviews for my new book Black Hat Blues. If you could help me out, I'd certainly be grateful.
Newer Post Older Post Home
Posted by G. Kendall at 3:00 AM