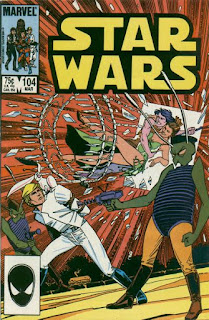 In a Nutshell
Forces converge on Zeltros as the Alliance seeks to formally enlist the world in their fight against the Nagai.

Plot
Luke, Plif & Lando arrive on Zeltros and reunite with Leia. Shortly thereafter, Han, Chewbacca & Threepio arrive on the planet along with Dani. The group is there to persuade Zeltros to formally join the Alliance against the Nagai, something Dani - bitter as a result of Kiro's death and her torture at the hands of Den Siva - is eager to see. Meanwhile, both the Nagai and the Hiromi began plans for their assault on Zeltros. On the planet, the rulers are mostly concerned with throwing a party, and when Leia says that her recent encounter with Tai on Trenwyth has given her new insight into the Nagai, the ensuing argument with Dani over the best course of action delays the rulers' decision. As Leia privately tries to convince Dani that the Nagai may not be purely evil, Den Siva enters the room, and captures them both. Meanwhile, Luke & Plif encounter the comically-inept Hiromi invasion force, and play along with being captured by them as they "conquer" the planet by claiming the throne room, left empty while the rulers attend the party. That party is instead interrupted by the Nagai invasion, which is observed from outside by Leia's male Zeltron attaches. They rush to get help, but are stopped by an ominous figure. Elsewhere, with Luke still their ostensible captive, a figure of the same species who halted Leia's attaches prepares to attack the Hiromi.

Firsts and Other Notables
This issue marks the beginning of the series' final major story arc, with each issue from here until the end all part of one continuous story that chronicles the introduction of the Tofs into the Alliance-Nagai-Imperial war via the invasion of Zeltros and leads to a rejiggering of that war as three non-Tof sides come together against the new foe.

Setting up their role, the still unnamed Tof appear briefly here, mostly obscured off panel, as they move on the people gathered on Zeltros.

The Hiromi, the beret-wearing bug people from issue #94, also return this issue. They invade Zeltros and "capture" Luke & Plif, but it is all played mostly for laughs, with Luke going along mostly just to see where everything is going. 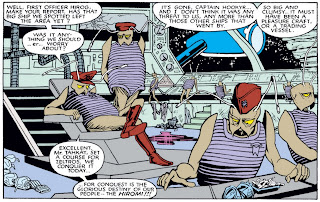 As a result of the previous issue, Leia believes she is starting to understand what motivates the Nagai, and that they may not be purely evil. She also says she encountered a tremendous evil on Trenwyth, beyond what the Nagain represent; this is all meant to lay the groundwork for the upcoming alliance with the Nagai in the face of the Tof threat, but in both cases, it feels more like we’re being told those things after the fact rather than seeing them depicted last issue (Tai was certainly shown to be fearful of the Tof last issue, but it was not terribly clear that this was communicated to Leia, at least not in a way that she could then use to draw the conclusions she's drawing here). It's also already disturbing that Leia is trying to convince Dani to sympathize with the Nagai, considering how clearly raw Dani's feelings are towards the people who (as far as she knows) murdered Kiro and tortured her extensively. 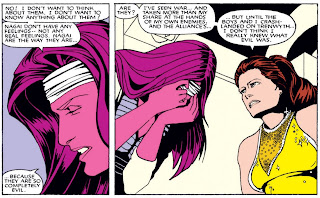 The title is a doozy of pun (and I say that as someone who generally loves puns more than most), but it does have the added side effect of making clear the pronunciation of "Nagai".

A Work in Progress
Luke is back in his Jedi blacks in this issue.

Lando, reacting the best of anyone upon meeting Zeltrons. 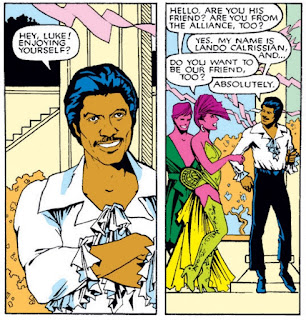 Dani has grown darker & more angsty since Kiro's “death”, something which concerns the telepathic Hoojibs. 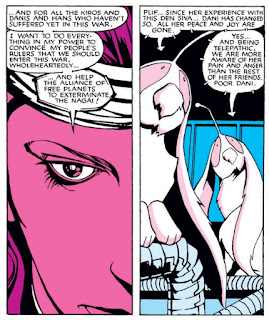 Artistic Achievements
Martin comes up with a novel way to depict a ship moving through hyperspace.

Young Love
Plif notes that Luke is once again surrounded by Zeltron ladies.

Austin's Analysis
This issue is, seemingly intentionally, all about contrasts: the Hiromi take themselves very seriously, but Luke sees them as a joke (at worst) or a minimal threat (at best). The Alliance leadership wants to have a serious discussion about Zeltros joining the war against the Nagai, while Zeltros' leadership just wants to party. And Leia is beginning to moderate on the Nagai, seeming them as more than a threat of pure evil as a result of her recent experiences with them, while Dani is becoming more radicalized, viewing the Nagai as nothing more than a malevolent force that needs to be destroyed as a result of her recent experiences with them. Set against this backdrop of contrasts is the quiet escalation of the war, as the beings we will come to know as Tofs (presented here simply as unseen, menacing figures) enter into the mix with an ominous air about them.

And while it's also clear that Duffy intends for that ominous tone to be building throughout the issue, with Leia describing the Tofs she encountered in the previous issue as something worse than the Nagai while keeping the Tofs in this issue obscured but still disruptive, that tone is somewhat undercut by the whackier sides of the various dichotomies. Leia's debate with Dani about the Nagai being, at least, three-dimensional villains instead of one-dimensional ones is, in theory, an interesting one (even though Leia isn't quite as sympathetic as she should be about asking Dani to consider the people who killed her lover and tortured her as something other than monsters), but it's undercut by having the rest of Zeltros go full on pleasure planet in the midst of that debate. We're clearly meant to realize Dani's hardening perspective on the Nagai is a big deal because she's become so different from the rest of her (relatively carefree) people, but in highlighting that contrast, it leaves us wondering how important this summit even is (ie how much help are the nonstop party people going to be against the Nagai anyway?).

Similarly, the duel Nagai/Tof infiltration of the Zeltron party is supposed to be a big scary thing, but at the same time, we're also meant to be laughing at a different invasion that is played entirely for laughs (and while it's understandable Luke would play along with the Hiromi, he is perhaps a bit too laid-back in his dealings with them). Instead of the Hiromi invasion making the Nagai & Tof invasions more ominous by contrast, it just muddies the overall tone. The end result is an unintentionally confusing issue, one which wants to be goofy & ominous at the same time but in doing so, both tones are undermined rather than strengthened by the contrast.

Next Issue
The three way battle for Zeltros begins!