G.I. Joe against Cobra and Destro
Fighting to save the day
He never gives up
He's always there
Fighting for freedom over land and air!

I'm confident we're now past the date of September 12, 1983, the debut of G. I. Joe: A Real American Hero, the five-part miniseries that eventually launched the daily syndicated show. The jingles in the ads have been getting closer and closer to the cartoon's theme, and now it's here. The lyrics haven't been altered to "G.I. Joe against Cobra: The Enemy" but "Cobra and Destro" are the original miniseries' lyrics. 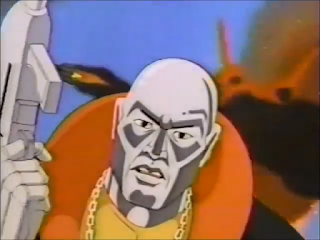 Oddly enough, the first time G. I. Joe was put out of mothballs and reaired in 2002 by Cartoon Network, they tacked on the original mini's opening to all of the episodes. They also aired versions that didn't include the episode's title and writer's credit. That might sound insignificant, but the writer's credit on these shows were a sort of milestone in my life. It's how I realized these shows were written by actual people. (Some of them with silly names like "Buzz Dixon.") 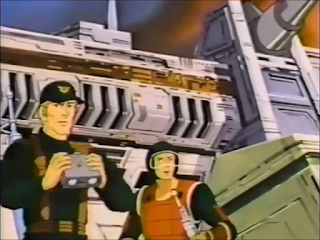 Why did this happen? My understanding is that two versions of the Sunbow G. I. Joe and Transformers episodes exist -- the original masters and the broadcast masters. The original masters were the versions of the episodes that were almost finished. They didn't include the chyron with the title and writer's credit, always added last. The producers reviewed them for mistakes, and if it was possible (and it often wasn't), some of the footage was sent back to be corrected. 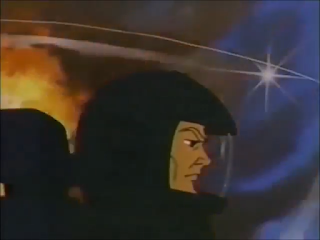 Hasbro preserved the film of the original masters. They didn't preserve, however, the actual broadcast masters, which are the versions the audience at home saw. Those featured whatever corrections had been made, and the oncreen title and credits. Whenever the show was reaired years later, Hasbro sent the original masters to the networks, because those are the highest quality versions. For some reason, the original 1983 mini's opening became attached to all of the episodes' master copy, which is why it continued to run on Cartoon Network. 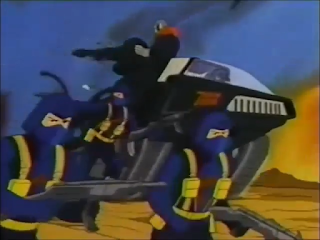 When Shout Factory released the show on DVD, Hasbro again provided the original masters. For the sake of preservation and accuracy, the DVD producer went in and added digital titles and credits in the same font of the broadcast masters. (He also attempted to pull as much corrected footage from the broadcast masters as possible and splice it in with the higher-quality original masters. I'm not sure if he found it all, but I do remember him soliciting Joe fans for help in locating these brief moments.)

So, all of that said...what about this commercial? Amazingly, it's for the very next issue of the comic. The ads are shifted from once a quarter, to once every other month, to now two months in a row! 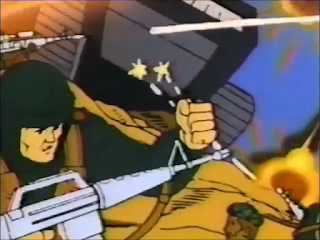 The commercial again attempts to blend the physical comic book with the animation, although it's a smoother job this time. Hama has stated the shot of the cover was always the last step of the process, with the editor just splicing it in before the commercial was sent off to be aired. Interesting that this time, the cover does match an actual sequence from the animation. Presumably, the artist was given storyboards and told to work in a very specific moment.

Oddly, the version of the cover seen in the commercial isn't the official one released. The actual corner box is a cartoony rendering of the book's assistant editor, during Marvel's oh-so-zany Assistant Editor's Month. The commercial features the traditional image of Grunt posing dramatically in the box. 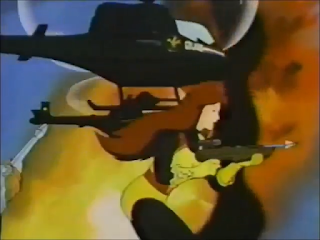 Does the actual comic read as a toy commercial? Yeah, it does. New products are appearing every few pages. (Amusingly, the SNAKE armor makes a quick debut this issue, but isn't in the commercial.) Hama even has to provide some rationale for why the Joes’ base is now the latest playset on sale. (Not that it ever matched the design of the base we saw in this commercial, which was also the design used in the animated series. I believe this commercial is the only time we saw the Joes actually using that giant cannon in the center of their base. That always bugged me as a kid.) 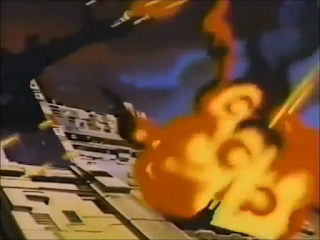 What the commercial doesn't capture is the ominous tone of the issue. Three major deaths this issue, lessons on morality, and a Pyrrhic victory that emphasis the brutality of war. Likely not what Hasbro wanted to sell to eight-year-olds. So, here's some generic action in the desert for the kids.

Hey, my continuation of the Sunbow series is still available for free over at Smashwords. And I'm very close to my goal of fifty Amazon reviews for my new book Black Hat Blues. If you could help me out, I'd certainly be grateful.
Newer Post Older Post Home
Posted by G. Kendall at 3:30 AM