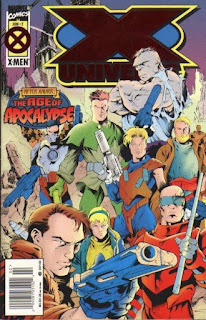 In a Nutshell
Humanity fights back against Mikhail.

Plot
As Empath, under the care of Matt Murdock, continues to keep the human populace of London docile, the captive Tony Stark is experimented on aboard Mikhail's ship. While Mikhail is meeting with the Human High Council, transistors in Stark's mechanical heart create a feedback loop, shutting down power to the ship, exactly as the captured agents of the council planned. With Operation: Trojan Horse in action, the agents storm the ship's armory and lead an attack on Mikhail's forces, with Gwen & Stark going to the bridge while Doom & Don Blake go to tell the council of Mikhail's lies. On the bridge, Gwen & Stark are attacked by the Hulk, and when Blake & Doom confront Mikhail in front of the council, he calls in his cybernetic Stryfe-Force troops to eliminate them. Aboard Mikhail's ship, Empath manages to force Murdock to confront all the pain he's caused, ending Empath's control over the crowd, and they rise up, storming the rest of Mikhail's armada. As Blake sacrifices himself to kill Mikhail, Hulk transforms back into Banner when he realizes Apocalypse intends to kill everyone in London, and works to take control of the ship. With the rest of the survivors aboard, the fleet heads for outer space, just as reality around them ends.

Firsts and Other Notables
The issue ends with all the human survivors in London, all aboard Mikhail's ships, heading for outer space, with reality ending (as a result of X-Men: Omega) just as they escape the atmosphere 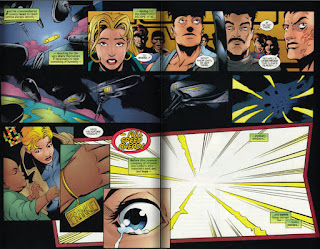 This issue is beset with several continuity/character errors that speak to the apparent slipshod execution of the series. A figure clearly meant to be Clint Barton (mentioned in this issue as Stark's pilot from the previous issues) with a visual nod to DC's Oliver Queen/Green Arrow, is said to be Bullseye (who was, per Blam in the comments to the previous issue's review, the character Carlos Pacheco was asked to draw as Stark's pilot in issue #1, only to have the character redrawn to be Clint after the fact). 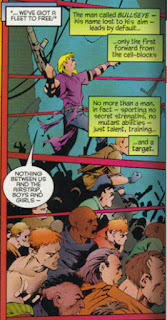 Kavanagh seems to believe "Horseman" and "Prelate" are equivalent ranks, when other issues have made it clear that's not the case.

Finally, Apocalypse's Seawall is referenced as being a force capable of destroying Mikhail's captured aramada and wiping out London, even though the Seawall elsewhere in "Age of Apocalypse" serves as a defensive shield protecting North America from outside attacks, with no indication it could go on the offensive to threaten Europe. 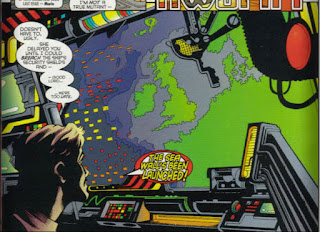 For whatever reason (to milk a few extra bucks out of any lingering speculators?) this issue also features a red-foil embossed cover, just like the first issue.

Through the Looking Glass
It's confirmed that the Tony Stark of this world was still injured (presumably in Vietnam) and still developed a technological solution to the shrapnel that was slowly killing him as a result. On the one hand, that makes sense, since "Vietnam" can be considered mostly to take place before or during the "twenty years ago" (relative to 1994-1995) setting of when Legion killed Xavier. On the other hand, it then seems odd that Tony Stark didn't continue being Iron Man, since his development of the initial armor occurred while in captivity (so if he escaped - as he clearly did - then he did so using the initial Iron Man armor). And while Apocalypse's emergence may have disrupted Stark's role as a wealthy captain of industry (and obviously prevented the formation of the Avengers), there's nothing to have prevented him from being Iron Man when Apocalypse did attack.

tl;dr: Lobdell and/or Kavanagh probably should have just steered clear of this particular hornet's nest. 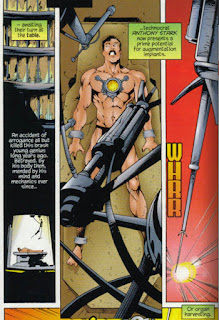 Don Blake reveals he has dreams of being, essentially, Thor, shortly before he takes out Mikhail with his cane (which is, of course, secretly Mjolnir). 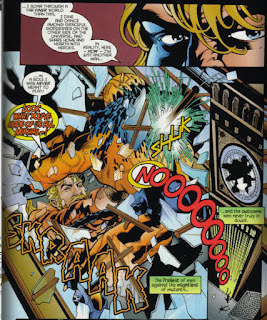 When Doom urges Stark to use the captured ships to attack Apocalypse, Stark insists their mission to protect the civilians, saying none of them set out to be Avengers before winking at the camera then slipping on a pair of sunglasses as the opening credits roll. 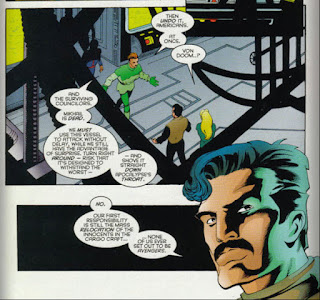 There's a subplot running through this issue involving a mother, father and their baby, caught up in the events of the plot. The mother ends up getting impressed into Mikhail's army of cybernetic troops, while the father is ultimately killed during the battle, leaving the baby to be rescued by Ben Grimm. Ben, in turn, is killed, and so the child is passed into the care of Sue Storm, at which point it's revealed that the baby's name is "Frankie", suggesting, I guess, that Sue is destined to take care of a child with "Frank" in the name. 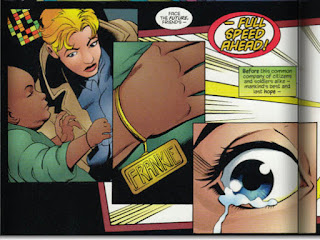 A Work in Progress
Mikhail's power is said to be the power to control power (ie energy), which is, frankly, a more clear explanation of his power than we've had at any point prior to this.

The Grim 'n' Gritty 90s
Don Blakes pulls a Pulp Fiction to revive Stark, whose heart stopped as part of the process that freed Mikhail's prisoners. 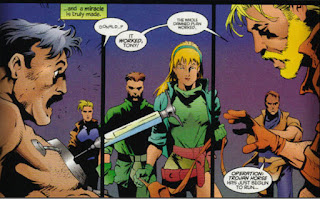 Austin's Analysis
This isn't a bad conclusion to the story - there's always something fun & entertaining in seeing a group of underdogs take down a vastly more powerful foe and the art, even with the switch to Terry Dodson towards the end, is very nice - but it also does little to ameliorate the concerns of the first issue. Between the various editorial mistakes that suggest this two-part series was thrown together last minute and the weird juxtaposition between the series being both too expansive (stretching the credibility that all of these characters would still come together when so much else in the world is different) and too limited (as it fails to address how the big events of the Marvel Universe, from the coming of Galactus to the Kree-Skrull war, played out in this altered reality, which seems like the kind of thing a series meant to ostensibly show the non-mutant side of the altered reality should do), this issue does little to justify the existence of this series. As much as individual parts of this work, so long as you don't think too hard about it, it's nevertheless a series in which the idea behind it is better than how that idea is executed.

Next Issue
Next week: Generation Next #4 and X-Man #4!