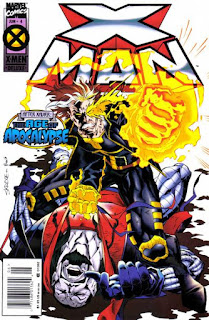 In a Nutshell
X-Man defeats Sinister, then sets out to fulfill his newfound destiny and defeat Apocalypse.

Plot
After Shadow King reports to Apocalypse that Domino has failed in her mission to eliminate the rogue telepath, Apocalypse vows to do the job himself, before returning to torturing the captive Magneto. Meanwhile, Nate savagely attacks Sinister, who brushes off his attacks before telling Nate how Sinister created him out of DNA from Cyclops & Jean Grey to be used as a weapon against Apocalypse, then urges him to fulfill his destiny & kill Apocalypse. Nate then turns the full force of his power against Sinister, telling him he'll go after Apocalypse because it's only a matter of time before Apocalypse comes after Nate. As Nate flies off, a surprised Sinister succumbs to his wounds and dies. Nate says goodbye to his friends then head east, towards Apocalypse. When he establishes a psi-link with Magneto, he sees him being tortured by Apocalypse, and is able to track him to Apocalypse's citadel. There, he encounters Cyclops & Jean as they're attempting to liberate the pens. Though Nate feels a connection to them & vows to find them after the fight is over, he continues on to the citadel, declaring he's coming for Apocalypse!

Firsts and Other Notables
This issue confirms Nate's origin as a genetic creation of Sinister's, generated using the DNA of Cyclops & Jean Grey (said to be because they're such powerful mutants), then artificially aged to serve as a potential weapon against Apocalypse. He was then rescued by Cyclops and smuggled out of the Pens (as part of Cyclop's overall "assuage his guilt by secretly helping prisoners escape" actions) and handed over to Forge. 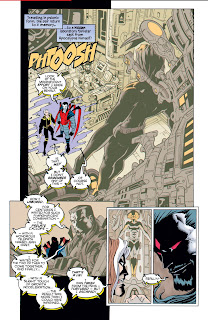 Sinister's stated goal in creating Nate - to use him as a weapon against Apocalypse - is something that's already been danced around a bit in the prime reality regarding Mr. Sinister's role in the birth of Nathan Summers/Cable (ie he created Madelyne Pryor as a brood mare to create a union of Summers & Grey DNA) and Cable's destiny as a foil of Apocalypse, mostly through subtext. But on the strength of it becoming text here, it will be more directly applied retroactively to the prime characters coming out of "Age of Apocalypse", with Mr. Sinister's motivations for manipulating Cyclops and creating Madelyne directly attributed to his desire to create a being capable of defeating Apocalypse, while Cable's role as a foil for Apocalypse will be referenced more and more frequently. 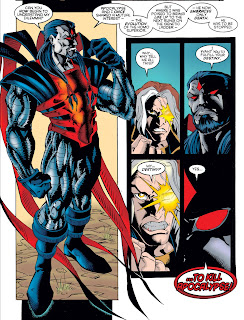 Sinister is killed by Nate this issue, with the character seemingly surprised that Nate was able to do so. 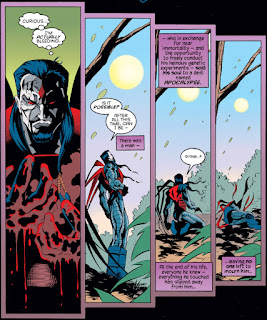 Unlike all the other "Age of Apocalypse" series, this is *not* the final issue of this series, as it will continue next month, with the title character transferring over to the prime reality (the mechanics of which will be shown in X-Men Omega & X-Men Prime).

A Work in Progress
Taking place before X-Calibre #4, Shadow King is on hand to report to Apocalypse on Domino’s failure. 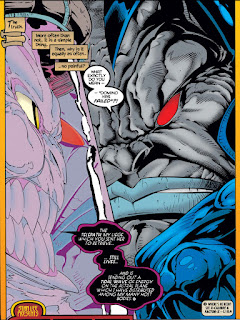 The encounter between Nate, Cyclops & Jean referenced in Factor X #4 is depicted here. 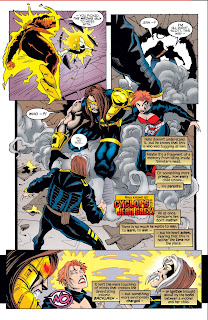 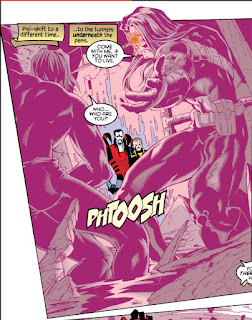 Austin's Analysis
Especially given the somewhat measured pacing of the previous issues in this series, a ton happens in this one: Nate confronts (and kills) Sinister (who killed his de facto father last issue), learns his origin, says goodbye to what remains of the only family he's ever known and his quasi-love interest, meets his parents, and sets off to confront Apocalypse. That's a lot for any one issue to handle, and not surprisingly, the end result feels a bit rushed, with none of those beats (with the possible exception of his impending clash with Apocalypse) landing with as much of an emotional beat as they probably deserve. Despite this somewhat rushed feeling ending, X-Man stands as one of the surprising standouts of "Age of Apocalypse", a series largely removed from the larger events of the crossover, featuring a classic hero's journey at its core as its central character grapples with his emerging power as he tries to find his place in the world and meet his destiny. The juxtaposition of that traditional plot structure with the grimdark setting and a main character who isn't (yet...) too annoying as he goes about his journey combine for a unique & satisfying series.

Next Issue
Next week: The Age of Apocalypse comes to a close in X-Men: Omega!