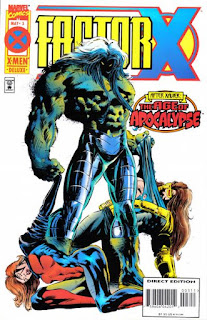 In a Nutshell
Jean Grey returns to the Pens, prompting a direct confrontation between Cyclops & Havok.

Plot
As Cyclops returns to the Pens, Jean Grey sneaks inside herself, hoping to find Sinister. However, she finds Sinister's lab destroyed, and gets knocked out by a gleeful Havok. At Angel's Heaven nightclub, the Bedlam Brothers arrest Scarlett for espionage, warning Angel that between her arrest & Karma's, his much-professed neutrality may soon come under scrutiny. Back at the Pens, Havok shows Cyclops the captive Jean Grey. He reveals that he knows Cyclops helped Lorna Dane escape, and when Cyclops professes his innocence, Havok tells him to prove it by executing Jean. When Cyclops refuses, the Guthries, lying in wait, attack and knock him out. Havok proclaims himself the commander of the EMF and gives Cyclops to Beast, along with Jean. But Jean is able to use her power enough to remove Cyclop's visor, allowing him to blast Beast and free them. Cyclops agrees to help Jean liberate the Pens before the Human High Council's nuclear strike obliterates the city. Elsewhere, Apocalypse decrees that the Pens will be shut down, and the prisoners culled, such that the strong will survive and the weak perish.

Firsts and Other Notables
Fresh off her break with Weapon X in Weapon X #2, Jean Grey turns up in this issue, seeking the assistance of Sinister to stop Apocalypse before the world is bathed in nuclear fire, but instead ending up in an alliance with Cyclops, whose previous encounter with Jean awakened his innate goodness and led him to start helping prisoners escape.

Terry Dodson pitches in on this issue, alternating pages with Epting seemingly at random (though he does pencil the flashback to Jean's initial capture, which is a nice touch considering he also drew X-Men Chronicles #1, set not long before those events).

Through the Looking Glass
Jean is attacked by a wolf in which, after she knocks out, she senses an almost human psyche; this, then, is presumably the AoA Wolfsbane. 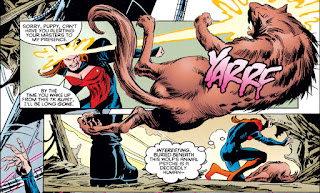 A Work in Progress
This issue introduces the Kennel, a subsection of the larger breeding pens for mutants with animalistic mutations. 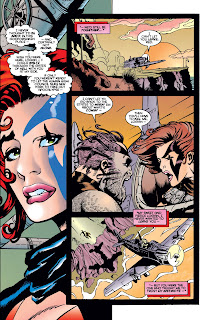 Another flashback shows Sinister delivering Weapon X & Jean Apocalypse’s European strike plans to deliver to the Human High Council (which they did in Weapon X #1). 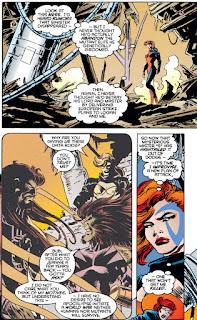 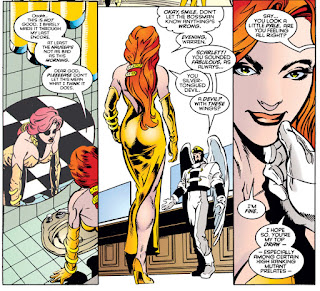 Shortly thereafter, she’s arrested on the grounds of being a spy, having been accused by Karma while under interrogation. 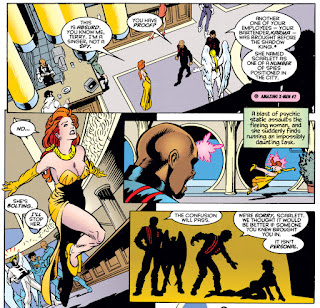 A final flashback shows Jean’s capture by Cyclops, Sinister’s elation at having access to her genetic stock, and how her resolve inspired Cyclops to both free her and others from the pens. 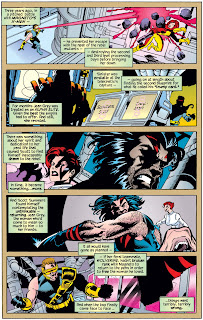 After helping Havok capture his brother, the Guthries are promoted from Rooks to Prelates. 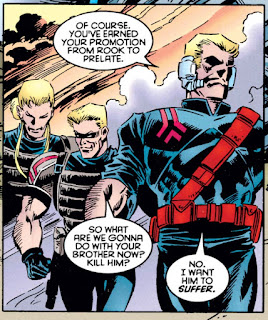 Beast is intent on making a new breed of soldier, longer-lived than the Infinites and more ferocious than the Balrog Cyborgs (the Reavers, I believe, being an example of those). 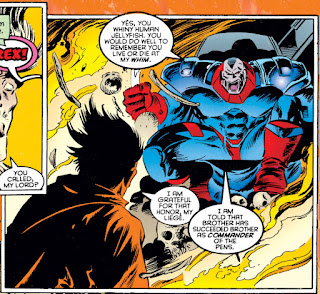 In Sinister’s absence, Apocalypse orders the Pens to be culled. 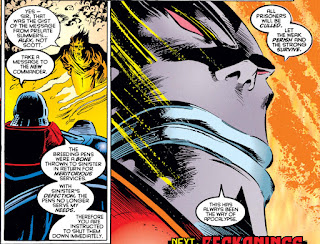 Austin's Analysis
Continuing this series' close association with Weapon X, Jean Grey transfers over following her separation from Weapon X in order to reunite with Cyclops and add further fuel to the Cyclops/Havok rivalry ahead of the story's climax next issue. In addition to leading to a downplaying of the Shakespearean machinations (an unavoidable by-product of Havok moving against his brother openly), Jean's presence, along with Beast and the subplot involving Scarlett & Angel's loyalties, means this issue features four of the five original X-Men (only Iceman is absent), which of course also means it features four of the five original X-Factor members. Initially, with Havok, leader of the "All New X-Factor" having such a prominent role in the story, the additional presence of characters like Cyclops & Beast felt like a logical outgrowth of Havok's presence. But now, with both Jean & Angel being featured in the series, this does read very much like an attempt to honor the full history of X-Factor in its AoA re-imagining, and not just it's most recent iteration. Whether or not that's intentional is, of course, debatable.