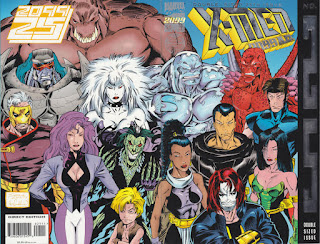 In a Nutshell
The X-Men reunite and take down the Theater of Pain.

Plot
As President Doom & Morphine Somers discuss their plans for the X-Men, Brimstone Love & Xi'an kick off their show, using the comatose Zhao & the Mindfire machine to heighten & manipulate the pain of the Slaughterhouse denizens & broadcast it to their audience. Elsewhere, in the garbage dump, Fitz encounters Junkpile, tossed their after his battle with Brimstone Love, and together, they escape. In the Keewazi Nation, Glitterspike incapacitates Metalhead, closing in on the in-labor Rosa, but Rosa's unborn baby uses its powers to defend her. In the Slaughterhouse, Meanstreak, Krystalin & Bloodhawk help Sham & Quiver, then are attacked by Zhao's X-Men, brainwashed by the Theater. As the show continues, Brimstone Love confronts Luna, placing her back in a Theater slave collar. He sets her against  Fitz & Junkpile, but Fitz manages to remove her collar. As the battle with Zhao's X-Men spills out into the auditorium, Meanstreak uses the broadcast to target the Theater's clientele, while Cerebra shuts down the Mindfire machine as the rest of the X-Men attack Brimstone Love. Xi'an then turns on the weakened Brimstone Love, causing him to abandon the Theater & teleport away. Xi'an then attacks the X-Men, but Luna feeds on his inner anguish to augment her strength, overpowering him. Just then, SHIELD agents led by Morphine Somers burst into the theater, and a holographic Doom declares that he's relocating all the people who turned themselves over to the Theater to a new city he's created, and that he intends for the X-Men to be the city's guardian angels, a mission they reluctantly accept. Meanwhile, Rosa successfully gives birth to a healthy mutant boy.