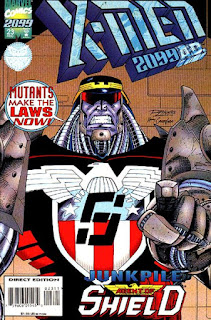 In a Nutshell
The X-Men infiltrate the Theater of Pain as Junkpile is sent to destroy it.

Plot
Morphine Somers revives Junkpile, and President Doom appoints him an Agent of SHIELD, answerable only to the pair of them. Meanwhile, Fitz, Luna & Cerebra attempt to infiltrate the Theater of Pain through Floodgate, the facility used to process the dregs of society coming to the theater in search of a new life. However, Controller X quickly spots them. Elsewhere, a mutant named Sham learns her friend Quiver is still alive somewhere inside the facility, and sets off in search of him. As Luna & Fitz are captured by Floodgate guards, Junkpile suddenly crashes into the facility, allowing Cerebra to evade capture. She encounters Sham just after Sham has freed Quiver from being tortured by the Theater, but Cerebra declines Sham's offer to escape together. Instead, she heads deeper into the facility, only to encounter Controller X, whom she immediately recognizes as Xi'an. A few levels up, Junkpile continues to tear into Floodgate, acting on orders from President Doom to shut the place down, only to come face-to-face with Brimstone Love.