X-amining Gambit and the X-Ternals #1 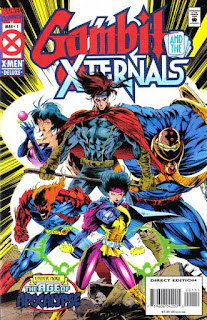 In a Nutshell
Magneto sends Gambit and the X-Ternals into space to retrieve the M'Kraan Crystal.

Plot
Jubilee, Guido & Sunspot of the X-Ternals steal medical supplies, delivering them to a human safehouse where Lila Cheney is waiting. Joining Lila, they head into the former Morlock Tunnels to join Gambit, who is waiting with Magneto, who has a mission for the X-Ternals: steal the M'Kraan crystal. Meanwhile, Commandant Richter receives a report from the squadron which engaged the X-Ternals. In the tunnels, Magneto leads the X-Ternals to a doorway leading to Apocalypse's Science Chamber. Fully expecting a trap, they enter, and are attacked by the Madri. As they fight them off, Sunspot discover Peter Corbeau, the human tasked with overseeing the chamber, whose life Magneto once saved. Accessing Apocalypse's star maps, he locates the Shi'ar galaxy, then he & Magneto help Lila access her latent teleportation powers in order to transport the group to the alien world. Just then, Richter & his forces attack. Magneto holds them off as the X-Ternals pass through Lila's portal, but Richter manages to follow behind them just before the portal closes. Magneto thanks Corbeau for his help, but Corbeau knows Apocalypse will learn of his betrayal and execute him for it. However, he at least he sets the chamber to explode, while Magneto worries that if the X-Ternals fail, an entire universe will die.

Firsts and Other Notables
This series takes the place of X-Force for the duration of "Age of Apocalypse", and will chronicle the efforts of Gambit and his team of thieves (consisting of Lila Cheney, Guido, Jubilee & Sunspot) to steal the M'Kraan crystal to help facilitate Magneto's efforts to restore reality. As a result, it will also serve as the primary vehicle to showcase the AoA versions of the "cosmic" side of the X-Men, like the Shi'ar, Lilandra, etc.

And while it comes from the same creative team as X-Force, it is obviously the series which departs the most from its prime counterpart: of the main X-Force characters, only one (Sunspot) is a main character in this series, and the fifth (out of five) most important one at that (Rictor, meanwhile, is on hand as the series' primary villain). The subplot in the larger AoA narrative that forms the main thrust of this series' story is predicated on Gambit's role as a thief (which stretches out to reimagine this group as a team of thieves), and the execution of that story will find the characters tossed into an explicit "X-Men in space!" plot. In other words, worlds away from X-Force's general set ups of "the team that strikes first and asks questions later" and "the further adventures of Xavier's now-grown second batch of students". The AoA X-Men books, for all their changes, are still ostensibly about X-Men defending humans from evil mutants; Generation Next is still about young mutant students; X-Calibre still features Nightcrawler. But there's very little X-Force in Gambit and the X-Ternals.

The Madri, also seen in Amazing X-Men #1, appear here. It’s also casually dropped that they’re all clones of Madrox (hence, Madri), something that, if I recall correctly, is treated like a bigger reveal later in the event. 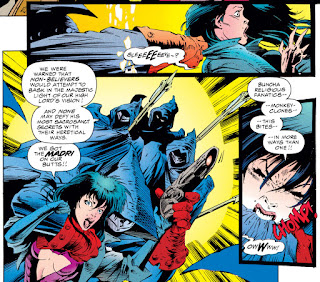 Through the Looking Glass
Gambit was a member of the Thieves Guild until Holocaust slew the guild’s benefactress, Candra, during one of the last “battles for succession”. He then threw in with the X-Men, until Rogue married Magneto (roughly two years ago), at which point he left to form the X-Ternals. 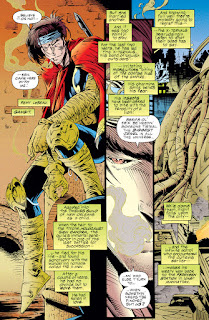 Gambit uses throwing knives instead of playing cards in this reality.

Rictor is a low-ranking official (called a "Mudir") hoping to capture the X-Ternals and raise his profile within Apocalypse’s Empire. 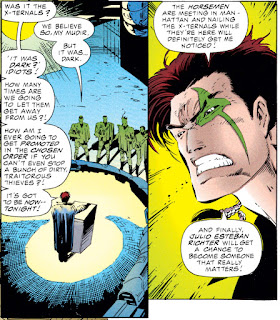 Magneto says he rescued Lila from an asylum; it is not the same asylum as he rescued Exodus from, as it later turns out he actually rescued her from Apocalypse’s star lab. 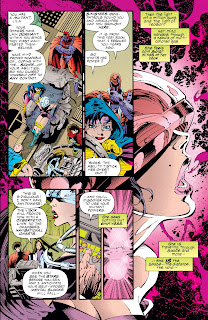 Magneto & the X-Ternals gain access to Apocalypse’s library (and stellar data), the remnants of Ship, thanks to the librarian, whose life Magneto once saved. He turns out to be Peter Corbeau, the astronaut & associate of Xavier who played a role in the creation of Phoenix in the prime reality. 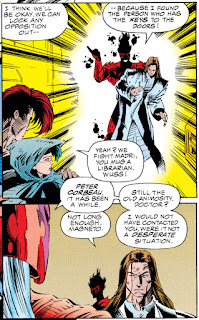 A Work in Progress
Apocalypse launched a nuclear strike against America on Jubilee’s sixth birthday. 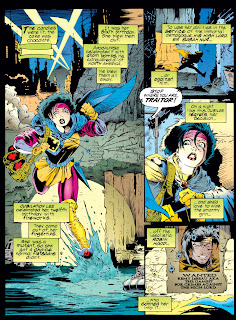 Jubilee threw in with Gambit after Everett died - presumably a reference to Synch. 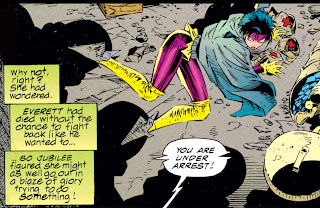 Within the shadow of Apocalypse’s citadel there is a Temple of Human Redress, a place for humans to air their grievances with the Mutant ruling class (grievances which go mostly ignored). 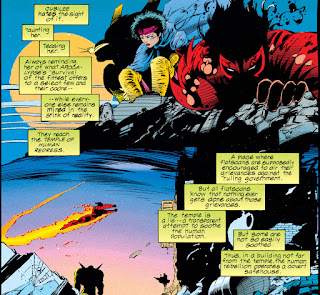 This issue reveals there is an organized human rebellion operating, which is aided by the X-ternals.

Apocalypse weeded out the Morlock Tunnels; now the X-ternals use it as their base of operations. 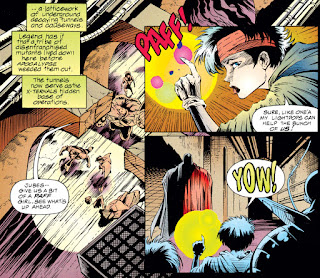 In another example of AoA characters being better with their powers, Jubilee is able to detonate the molecules in the Madri’ cloaks. 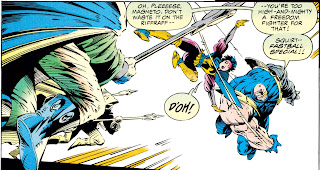 Austin's Analysis
For a series that I recall being largely disconnected from the main narrative (aside from its overall goal of retrieving the M'Kraan crystal, which certainly factors into the climax of the story) on account of most of it taking place away from Earth, this issue does a surprising amount of world-building in its opening pages, establishing both some measure of human society in the heart of Apocalypse's empire, to the point where a "redress center" exists (it may not be effective, but its existence at least suggests the humans who go there aren't, like, liquefied on site or something), as well as a human rebel faction, establishing that it's not just the X-Men fighting back against Apocalypse's regime. I also recall this being one of the more soap operatic AoA series, and that's established here, with Gambit still pining for Rogue, Lila pining for Gambit, and Guido pining for Lila (with Jubilee rolling her eyes at all of it). All in all, this is a fairly jam-packed issue - introducing the characters, building the world, and kicking off the "steal the M'Kraan crystal! plot - on par with Factor X for the way it quickly creates a world-within-a-world and draws the readers in to the interpersonal relationships amongst the cast.

Next Issue
Tomorrow, Nightcrawler heads south in X-Calibre #1! Next week, Generation Next #1 and X-Man #1.