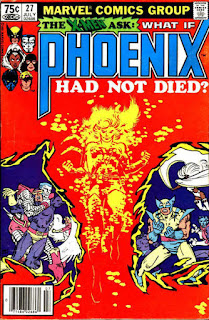 In a Nutshell
The Phoenix Force resurfaces in Jean, leading to the destruction of all existence.

Plot
After Jean and Cyclops are overwhelmed by the Imperial Guard, the Shi'ar perform a psychic lobotomy on Jean, removing her mutant powers. Life goes on for Jean and the rest the X-Men, including the arrival of their newest member, Kitty Pryde. Some time later, Lilandra calls for the X-Men's help in repelling Galactus from a planet within the Shi'ar empire. A still-powerless Jean joins the team as they travel to the planet, but when Terrax, herald of Galactus, threatens the lives of the team, including Cyclops, the Phoenix Force manifests in Jean once more. She proceeds to strip Terrax of his cosmic powers, then chases Galactus away from the planet. With a reborn Phoenix on their side, the X-Men make short work of their enemies in the following months, but Jean's hunger for power continues to grow, and she takes to consuming stars to feed it. Returning from one such trip, flush with power, she is confronted by Kitty, who tells her she needs to stop. Jean's joy & exhilaration quickly turning to anger & hatred, she incinerates Kitty in front of the horrified X-Men. Xavier once again tries to contain the Phoenix Force within Jean, but this time, Jean refuses to help him, instead turning him into a vegetable. She then kills the X-Men one by one, but when she kills Cyclops, her grief allows the Phoenix Force to engulf her. From there, it grows larger, consuming the city, then the planet, spreading across the universe, destroying everything in its path.