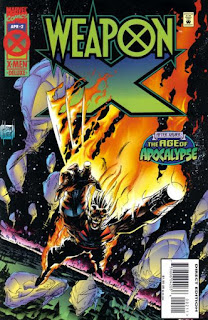 In a Nutshell
Weapon X attempt to stop an attack on the Human High Council's nuclear weapons.

Plot
Weapon X follows the traces of his psi-link with Jean to coast of Bristol, England, where she's assisting with the arrival of refugees from the Sentinel airlift. Amongst the crowd are three men, led by Pierce, who recognize Weapon X, as well as mutants Copycat & Box, who attack the refugees. The attack triggers memories of Jean's time in the Pens, which in turn triggers a berserker rage in Weapon X, allowing him to easily overpower the evil mutants. Their attack only galvanizes Weapon X's support for the upcoming nuclear strike on North America, but Jean remains opposed. Weapon X proceeds to meet with an old acquaintance, Lady Mariko, who expresses apprehensions about Brian Braddock. Just then, Pierce and his Pretty Boys attack one of the Council's airships, targeting the guidance system for the nuclear missiles. Weapon X leaps through the ensuing fireball to stop them, but Pierce manages to take out the system with a suicidal attack. Weapon X emerges from the flames, having sensed Jean's goodbye through their psi-link. He follows her to a small airfield, arriving just as she's about to take off. Weapon X says he can't let her warn anyone about what's coming, but when she tells him he'll have to kill her to stop her, he can't do it, instead leaping off the plane and watching as she flies away.

Firsts and Other Notables
Determined to warn someone (presumably the X-Men) about the imminent nuclear attack on North America, Jean leaves Weapon X this issue to return to America. Weapon X insists that the attack needs to happen and doesn't want Jean to do anything to stop it, but can't bring himself to kill her to prevent her leaving. 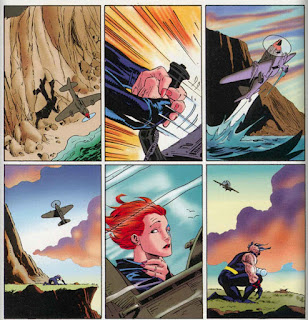 Through the Looking Glass
The "Age of Apocalypse" Reavers are introduced in this issue, "altered humans" still led by Pierce and calling themselves "Pretty Boys" (a reference to the former Reaver known as Pretty Boy), working in the service of Apocalypse. 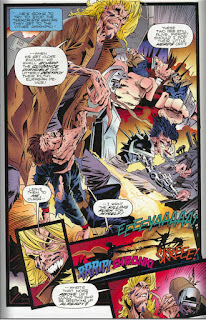 This issue reveals that Weapon X and Mariko encountered one another prior to the events of this series, suggesting a butterfly effect in the reality change that caused Wolverine to meet her for the first time independent of the X-Men (since, in the prime reality, it was well after the X-Men formed that he first met her, when the team visited Japan during the "World Tour" arc. 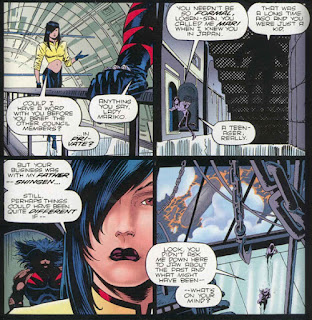 A Work in Progress
This issue opens in the wake of the Great Sentinel Airlift, with Weapon X searching for Jean amidst the arriving refugees ferreted out of North America in Amazing X-Men #2. 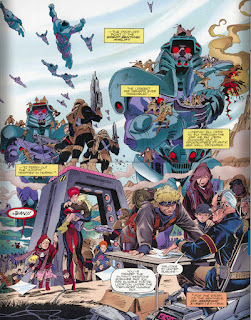 Similarly, Copycat and Box, of the Brotherhood that battled the X-Men in Amazing X-Men and hoped aboard the airlift in issue #2, arrive in England this issue. 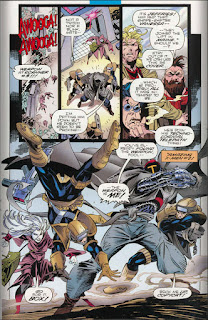 Brian Braddock's Braddock Industries manufacturers the Sentinels, giving him a vested interest in escalating the war between humans and mutants.

The Best There is at What He Does
Weapon X worries that if he falls too slowly through the fire cloud billowing from the besieged airship, his healing factor may not be able to keep up with the effects of the fire. 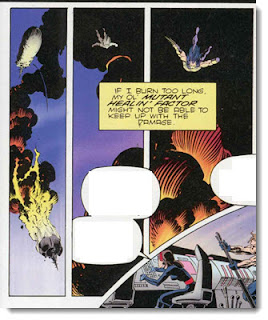 Austin's Analysis
While most of the "Age of Apocalypse" books reflect a fairly tight continuity with each other (even moreso than in the prime series going into the event), with series both directly and more subtly referencing events in other books, Weapon X remains the series most directly connected to other books. Last issue, it crossed over with Factor X while laying the groundwork for the Sentinel evacuation to occur in Amazing X-Men. Here, it picks that thread back up from Amazing, using the arrival of the refugees as the backdrop for the opening pages, then breaks Jean off from Weapon X, setting up her appearance in Factor X next month. Thankfully, Wolverine/Weapon X is a dominant enough character, and Hama is old-hat enough at writing him at this point (because, really, Weapon X isn't all that different from prime Wolverine), that for all the crossover stuff happening this still reads very much like Weapon X's book - everything that is happening is being filtered through his perspective, which helps prevent it from feeling like it's just a layover stop for other books.