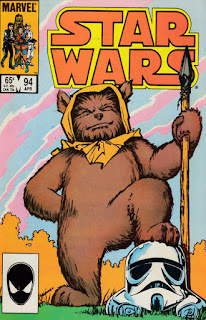 In a Nutshell
The Ewoks and the Lahsbees go to war.

Plot
Threepio laments the looming war between the Ewoks and the Lahsbees, triggered in part by him inadvertently sharing sensitive information. As Ackabr prepares the rest of the Galactic Alliance to remain neutral in the conflict, his aide Hirog contacts his people, the Hiromi, telling them the time to strike is now, as he's managed to orchestrate the conflict between the two races by implying impropriety on the part of the Lahsbee ambassador towards an Ewok princess, thereby enraging Tippet, a prominent Ewok. With the Alliance's unity threatened by the impending war, Hirog believes the Hiromi can take advantage to conquer the galaxy. Meanwhile, Luke attempts to get both the Lahsbees and the Ewoks to help him train, in the hopes of helping them blow off steam, but his efforts just heighten tensions between the races. Lando then intervenes, setting up the Lahsbee ambassador & Tippet to settle their differences one-on-one, and Han provides the Lahsbee with his blaster to even the odds. But an errant bolt strikes the bomb Hirog was planning to trigger to further heighten tensions, and one of the frightened Lahsbee transforms into a monstrous Huhk. However, the Lahsbees & Ewoks come together to knock out the Huhk and disable the bomb in the process, prompting the Hiromi to strategically retreat, fearing the apparent savagery of the two races.

Firsts and Other Notables
Cynthia Martin debuts this issue as the series' new regular artist. She is also the series' final regular artist, as she will remain on the book, barring a few fill-ins, through its end with issue #107. Martin will go on to draw a handful of issues for other series at both Marvel and DC, but Star Wars is easily her most significant work for either of the Big Two.

This also marks Tom Palmer's final issue as the series' regular inker, a run that stretches all the way back to issue #49 (with a few scattered issues prior to that). Moreso than any other penciler, Palmer has defined the look of this series up to this point, lending it a remarkable level of consistency regardless of who the penciler is, and is arguable the artistic MVP of the series as a result. He reportedly left this series in order to ink John Buscema on Roger Stern's Avengers run, and he will remain on that book for an amazing 125 issues.

Admiral Ackbar has a bug-like, beret-wearing assistant making his first appearance in this issue named Hirog, who turns out to be an advanced scout for the Hiromi empire (also appearing here for the first time), a member of the Galactic Alliance making their first appearance here. A cowardly race whose aspirations exceed their skill, the Hiromi will become a regular fixture in the series moving forward, including an attempt to conquer the planet Zeltros, after which they will ally with the Alliance against the Nagai during the Tof-Nagai War. 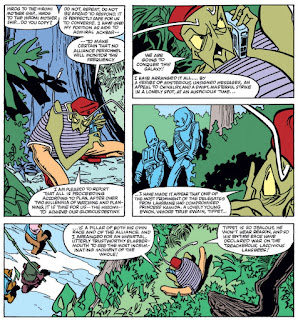 The Ewoks and the Lahsbees almost go to war in this issue, in what gets dubbed "The Battle of Cute". 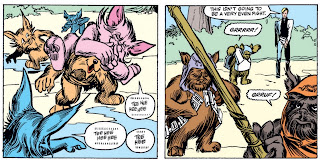 A Work in Progress
In preparing for war, the Ewoks don reclaimed stormtrooper gear, including, in at least one case, a helmet.

Leia is frightfully (and uncharacteristically) racist towards the Zeltrons. 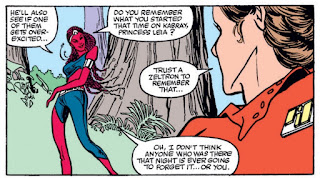 Use the Force
Luke uses the Force to telekinetically redirect a rock thrown by the Ewoks (inadvertently hitting the spying Hirog in the process). 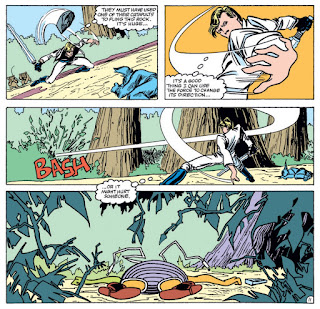 Just Yesterday, In a Galaxy Surprisingly Close By
"Blowing off steam" is an apparently a common idiom in the Star Wars galaxy, despite little evidence that present day technology descended from steam-driven vehicles.

Austin's Analysis
Considering how much the Ewoks dominate the immediate post-Return of the Jedi expanded universe (really, the Expanded Universe, such as it was, until Timothy Zahn's Heir to the Empire in 1991), what with their animated series, tie-in comic & action figure line, and a pair of made-for-TV movies, it's kind of surprising it took Duffy this long to mine the Ewoks for story ideas in this series. Even here, the story is less about the Ewoks and more a comical "battle of adorable furry aliens", and as such, it is mostly played for laughs. But it works, in part because it's not an ephemeral one-and-done story (with the Hiromi Empire, introduced here, returning later and becoming involved in the Tof-Nagai War), but also because the characters themselves, in-story, don't take the potential Ewok-Lahsbee war too seriously, either.

Sure, Threepio is hysterical about it & Ackbar grudgingly gives it the attention a war between two member species deserves, on paper at least, and everyone, including Han, Luke & Lando, do their best to settle the conflict without bloodshed, but nearly all of them do it in a fairly winking way, letting readers know it's okay to laugh at all this and not take it too seriously. The lighter tone is also a good fit for Cynthia Martin's debut issue, as her style, with its animated influence, almost gives the story the look & feel of a comic strip, which further enhances the humor at the heart of the story. It remains to be seen how well Martin's style will fit with the series for more straightforward, less intentionally-comical, stories, but it works well here to enhance this particular one.

Next Issue
The return of Lumiya!