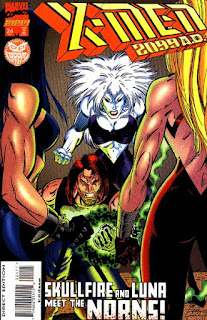 In a Nutshell
Rosa goes into labor, Meanstreak, Krystalin & Bloodhawk head off to help their friends, and Xi'an reveals his plan to Cerebra.

Plot
As Quiver & Sham attempt to escape the Slaughterhouse, Brimstone Love defeats Junkpile. Below, Luna & Fitz are captured by the Norns, and Fitz is tossed into a garbage pit where he is confronted by a monstrous figure emerging from the garbage. In Oklahoma, Glitterspike escapes from the Shadow Dancer and confronts Metalhead & Rosa, who goes into labor, while in the Sierras, Meanstreak, Krystalin & Bloodhawk reunite before making for the Slaughterhouse to help Fitz, Luna, and Cerebra. Inside the Slaughterhouse, Controller X reveals his plan to a captive Cerebra: to harness the power of the comatose Zhao to create a sympathy of suffering that will devastate the minds of thousands.