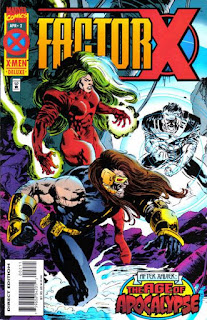 In a Nutshell
Cyclops is caught smuggling Polaris out of the Pens.

Plot
A mysterious figure Polaris believes to be her father helps two mutants escape from the Pens; he tells her the risk of discovery is too great if he takes her as well. Later, Havok & Cyclops meet with Apocalypse, after which Havok interrogates Polaris along with the Guthries while Cyclops meets with the Bedlam Brothers. When Polaris is unable to provide useful information, Havok turns her over to the Beast, while Cyclops & the Bedlam Brothers confirm that Sinister had a secret lab inside Apocalypse's statute. While there, Angel meets with Cyclops, telling him he's heard rumors of a full scale war with the humans in Europe, which would be bad for business. At Angel's Heaven nightclub, Havok has a post-coital drink with Scarlet. At the Pens, Cyclops angrily halts Beast's experimentation on Polaris, telling him he's jeopardizing the efforts at peace with the Human High Council. That night, the mysterious figure comes for Polaris, and sneaks her out of the Pens. They encounter Northstar & Aurora, but Polaris' benefactor fights them off. However, unbeknownst to them, Havok is following. When Polaris is delivered to a member of the underground, he watches as the hooded figure reveals himself to be Cyclops, much to Havok's delight.

Firsts and Other Notables
It’s revealed this issue that Cyclops is helping mutants escape from the pens (something hinted at on X-Man #1), and it concludes with Havok discovering the same, much to his delight. 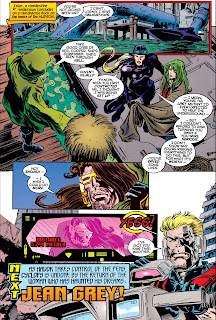 Referencing an event from Amazing X-Men #2, it’s revealed that Scarlett is secretly working for the Human High Council even as she finds herself falling in love with Havok. 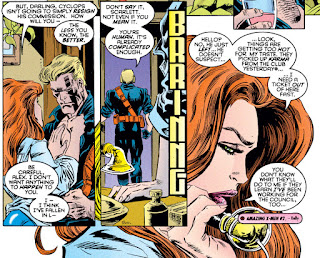 Through the Looking Glass
Previously mentioned in earlier issues, this marks the debut of AoA Polaris, who at this point is a prisoner in the Pens. She believes herself to be Magneto's daughter, and hallucinates that Cyclops is Magneto as he's helping her escape (at one point in this issue, Beast confirms that she is not Magneto's daughter, despite her belief, which was the case in the prime reality at the time, though it become more of a fluid question later on. Currently, I believe she is considered to be Magneto's daughter). 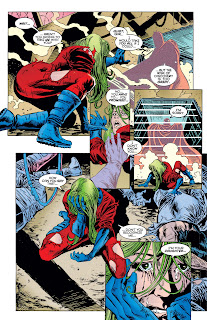 Val Cooper pops up as an agent of the Underground, presumably the same group helping ferret mutants out of Manhattan to Avalon along the Infernal Gallop.

A Work in Progress
The prisoners in the Pena are made docile via a coterie of bio-engineered telepathic brains. 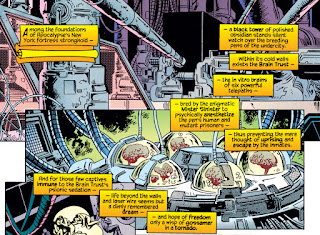 Apocalypse continues to be nonplussed by Sinister’s disappearance, even suggesting that Cyclops May one day replace Sinister as a Horseman. 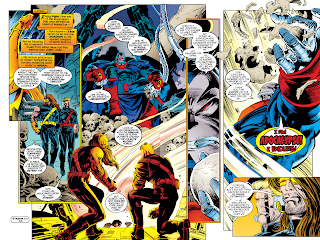 Havok is enraged by the suggestion, telling himself he’ll kill Cyclops rather than let it happen. 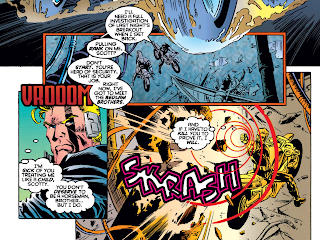 Havok mentions that the rest of the Guthrie’s, save Elizabeth & Sam (and, of course, Paige) were culled.

Polaris’ past, including her encounter with Rogue, is recounted.

The Reference Section
Polaris is being held in section 7G, presumably alongside Homer Simpson. 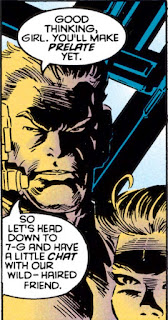 Austin's Analysis
Following on from the first issue, this is more of the same (which a good thing!): more palace intrigue amongst the Elite Mutant Force, more simmering resentment & Shakespearean plotting from Havok, more moody & atmospheric art. The big reveal here is that Cyclops has a conscience, and has been using his intimate knowledge of the Pens and the EMF's operations to smuggle prisoners out of the concentration camps to the human resistance. Not only does this speak to his character (suggesting that, universally, Scott Summers is an inherently good guy), but it also sets in motion the microplot that will unfold in the remainder of the series (Havok moving overtly against his brother), but also sets the stage for the dramatic return of one of Cyclops' more notable escapees in the next issue, in the process remaining one of the more engaging Age of Apocalypse series.

Next Issue
Tomorrow, Weapon X fights the AoA Reavers in Weapon X #2. Next week, Amazing X-Men #2 and Gambit and the X-Ternals #2!