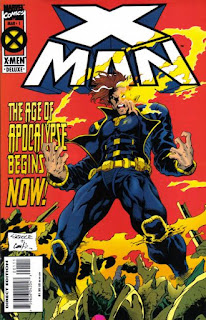 In a Nutshell
Nate Grey yearns to use his power for good, even as he draws the attention of Apocalypse.

Plot
Nate Grey dreams of his escape from Apocalypse's pens, then finds himself at a strange mansion, witnessing a conversation between Magneto & Bishop. Suddenly, Forge appears in the dream, and Nate wakes up to find that, while dreaming, he destroyed much of the landscape around him. Later, the rebel group posing as a traveling actor troupe of which Nate & Forge are a part put on a show. When they're hassled by the local prelates, Nate uses his telepathic powers to alter their minds, much to Forge's dismay, who worries Nate using his powers will attract unwanted attention. Sure enough, the Shadow King has detected Nate, and Apocalypse charges Domino with assembling a team of hunters to either collect or kill him. In Kansas, a young woman named Theresa is rescued from Apocalypse's forces by Forge's band, and when Nate is threatened, Theresa manifests an unknown sonic power to save him. Nate insists on bringing her along as the troupe moves on, and Forge reluctantly agrees. Later, the band comes across a fellow traveler named Essex, who says he may be of some help to them.

Firsts and Other Notables
The "Age of Apocalypse" version of Cable, X-Man is notable for being the one series to continue on past the conclusion of the event, and infamous for becoming a terrible series shortly thereafter (and continuing to exist as a terrible series for years thereafter, even while the rest of Marvel burns down around it), while the title character will, much later, become the inspiration for his own "Age of Apocalypse"-style event, thanks in part to 90s nostalgia. Therefore, this issue is notable for being the first appearance of X-Man, in a way most of the other first appearances of Age of Apocalypse characters aren't, as he'll live on beyond the event, even after his prime counterpart is restored.

The issue concludes with Nate and his traveling companions encountering a man named Essex (an alias used regularly by Mr. Sinister in the prime reality), with Sinister's distinct "red diamond" on his forehead. He will in fact turn out to be Mr. Sinister.

Through the Looking Glass
Nate is part of a mutant rebel cell disguised as a troop of traveling actors consisting of the AoA versions of Forge, Toad, Soaron (Sauron, whose pterodactyl bite presumably took place pre-Apocalypse ascension, but which somehow didn't turn him evil), Mastermind (who is mute), and Brute (the AoA version of the Morlock Sunder). 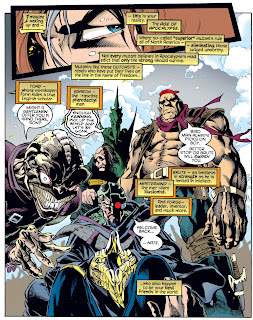 Domino is recast as the leader of a group of bounty hunters tasked by Apocalypse to capture or kill Nate. 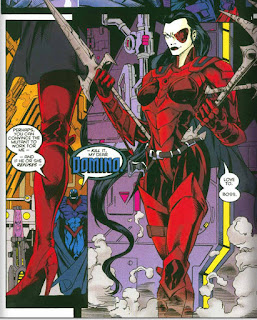 She is sent after Nate after his power is detected on the Astral Plane by Shadow King, who is basically a head in a jar (almost like his monstrous astral form has been grabbed and tossed into the jar).

AoA Siryn falls in with Nate's acting troupe in this issue, and her presence is somewhat perplexing, as it makes little sense, in-universe, for the European-born Siryn, who doesn't know she's a mutant until this issue, to end up in the middle of an America in which humans are on the verge of extinction. And while the coincidence of, say, Domino of all people being tasked with hunting down the AoA version of Cable can be explained (in the real world) by Domino being a recurring part of the prime series and (in-universe) by the vague workings of fate and certain people being destined to encounter one another (even if the exact circumstances and ultimate outcome turn out differently), the connection between Siryn & Cable in the prime reality isn't any stronger than "occasional teammates". 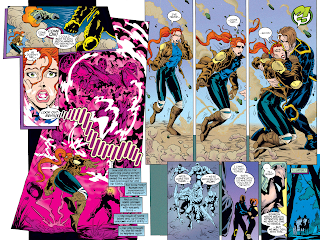 A Work in Progress
In the opening pages of the issue, Nate flashes back to his escape from the Pens, aided by Cyclops. 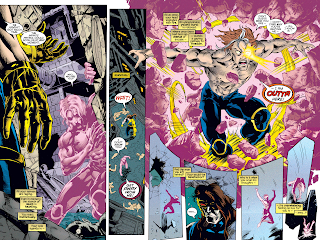 Cyclops informs Apocalypse of Sinister’s disappearance, but he is not terribly concerned. 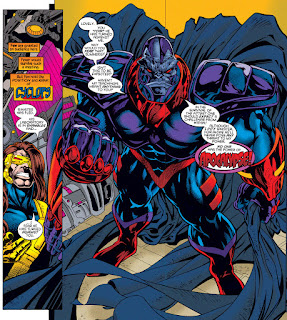 The Reference Section
Cyclops tells Nate “come with me if you want to live”, an homage to The Terminator. 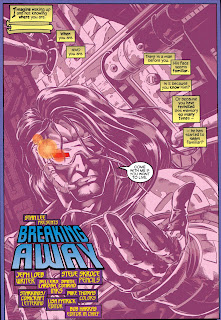 It's important, here at the beginning, to separate X-Man, the four issue "Age of Apocalypse" counterpart to Cable, from X-Man, the series which would continue beyond the event and become the nadir of 90s X-Men comics, to not think "if not for these first four issues, perhaps we'd be spared what follows". Because the AoA X-Man is by no means terrible (certainly nowhere near as bad was what the series will later bring us). In fact, it's rather engaging for being somewhat unique in the context of the overall event narrative, in that it takes place far away from the power centers of the world (Apocalypse's Manhattan, the X-Mansion, and the Human High Council's European environs) and, by recasting Cable as a teenager with no connection to his parents, it tells a more classic Hero's Journey/Chosen One arc, with the central character in hiding from evil forces, bristling against the protections of his mentor figure as he struggles with his massive power, eager to use it to make the world a better place.

Thus, where much of "Age of Apocalypse" is a sort of urban dystopic sci-fi story, X-Man draws much more on the beats of a traditional fantasy story (right down to the central character kind of being a brat; I keep waiting for him to complain about wanting to get some power converters). As such, it lends a little different flavor to the event, something that's on display already here, as Nate's burgeoning powers are put on display, drawing disparate forces to converge on his found family in order to harness that power, all set against the backdrop of a "middle America" in which Apocalypse has a looming - but distant - presence.

Next Issue
Next week: the second of "Age of Apocalypse" issues begin with Astonishing X-Men #2, Factor X #2 and Weapon X #2!