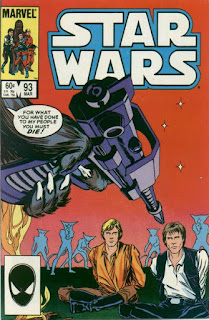 In a Nutshell
The Star Warriors help reunite rival factions of the cat-like Cantrosians!

Plot
When an X-wing appears in the skies above the Rebel base on Saijo, the visiting Han, Luke & Leia leap into action, shooting down the pursuing ships and bringing the crashed pilot in for medical treatment. The pilot, Minka, tells them that the Rebel forces on her home planet of Cantros 7 are under attack by Imperial forces, prompting the trio to accompany her home. Once there, they meet Minka's friends Sami & Durne. Puzzled by the reports of Imperial activity, given the relative decline of the Empire, Han, Luke & Leia travel to the far side of the planet, accompanied by Minka & Sami. Shot down en route, Han, Luke & Sami are captured, while Leia & Minka escape. The captives are taken before a group of Cantrosians who claim to be part of the Rebel Alliance, believing their captives to be Imperial agents. As they argue over what to do with the captives, Durne appears, and it becomes clear he's been playing both sides against each other. Just then, Leia & Minka arrive, helping free the captives, and in the ensuing shootout, Luke blocks a kill shot fired by Durne at the leader of the other faction. This confirms for the rival faction that Luke and his friends aren't Imperial agents, and they take Durne captive, with the two sides reconciling. Leia is pleased with their victory, but Luke remains troubled, pondering who Durne was working for, the latest in a string of odd incidents that have left him wondering what is going on in the galaxy.

Firsts and Other Notables
This is the first and only appearance of the Cantrosians, a race of cat-like aliens who are...very cat-like in their appearance. 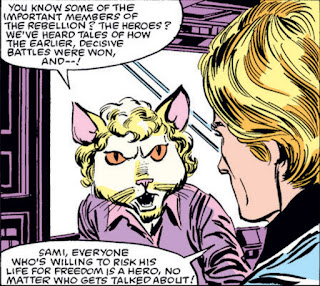 The issue concludes with Luke wondering who Durne was working for in his efforts to turn the Cantrosians against each other, asking rhetorically what is going on in the galaxy, which, I assume, is meant to tie in with the upcoming Tof-Nagai war, with the Tofs looking to sow discord in the galaxy ahead of their invasion.

Creator Central
Cynthia Martin, who will join the series as its new regular artist next issue, draws the cover to this issue.

A Work in Progress
Per Leia, the Empire is mostly defeated, with just a few remaining factions comprised of scattered forces that have banded together. 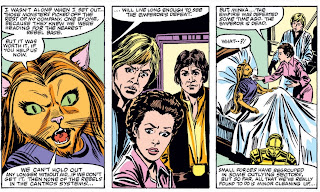 Luke uses the Force to levitate Leia and Minka out of a ravine, but the effort takes a lot out of him. 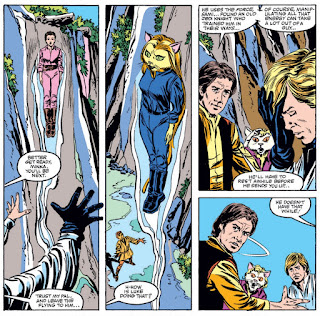 Han jokes that he hates torture, which plays like standard tough guy talk...until you remember he was tortured extensively in Empire.

Luke uses his lightsaber to block a blaster bolt, which impresses the Cat People (and reveals his identity). 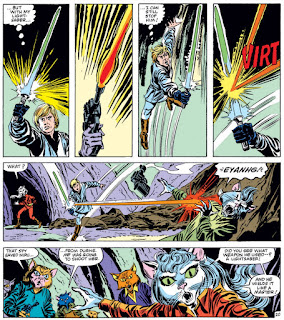 In a rare bit of self-reflection for this series, Luke laments the loss of life, including the Cantrosians the Star Warriors killed themselves, thinking them to be Imperial agents.

Austin's Analysis
Going into this issue, knowing it featured "Cat People" aliens, I was kind of dreading it, expecting another one-off fill-in in which the new character du jour crowded out the main characters. But it turned out to be surprisingly good! For one thing, it gives us the rare story in which we get to see the main trio of Leia, Han & Luke on a mission together. For another, it uses Luke, and his evolved Jedi abilities, really well, allowing him to not only do physical stuff with the Force, but also to utilize the less flashy aspects of being Jedi, as it's made clear he could escape from captivity at any point but holds off on any retaliatory action until he can gather more information about the situation and suss out what's really going on.

And by concluding the story without going into *why* Durne was pitting his people against themselves, but also by having Luke raise that question in the narrative (thereby making it clear that we, as readers, are supposed to be wondering that and it's not a case of the creators just forgetting to answer the question), this story gets tied in with the slowly building Tof-Nagai plotline. Plus, along the way, it tackles some interesting ideas about the nature of conflict, how easy it is to just keep fighting when all you've known for so long is fighting, and the in-universe fame of the central characters. All in all, for an issue I expected the worst from, it turned out to be exactly the kind of story this series should be telling post-Return of the Jedi, one which keeps the main characters in focus, allows Luke to be a Jedi, contributes to a larger overall narrative arc, all whole exploring the ramifications of the Rebel victory over the Empire.