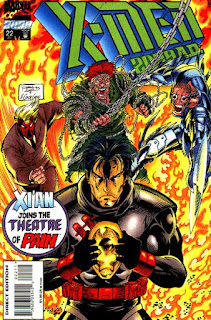 In a Nutshell
Xi'an is initiated into the Theater of Pain.

Plot
Ahead of his initiation into the Theater of Pain, Brimstone Love introduces Xi'an to Charon, the Prime Controller, and Felicity, commander of the Norns. He then blasts Xi'an with his hellfire, seemingly teleporting him to his childhood home of Aspen. There, Xi'an encounters an old foe named Chainlink, before Brimstone Love orders Charon to move on to the next scene. Suddenly, Xi'an finds himself with the Lawless in Nogales, battling the cyborg Gearbox, who severely injures Haiku before Xi'an escapes. Meanwhile, Cerebra, Fitz & Luna visit Haiku, looking for info on the location of the Theater of Pain. Elsewhere, Xi'an finds himself facing the assassin Quickdeath in Saigon, then Noah Synge at Nuevo Sol. Xi'an collapses, and Felicity emerges from the shadows, impressed with how long he lasted. Brimstone Love then declares it's time to remake Xi'an in their image. Inside his mind, Xi'an refuses the help of his heroic self, after which he is formally initiated into the Theater of Pain. Meanwhile, Morphine Somers meets with President Doom in Arizona, reporting that the X-Men have scattered to the winds, but that he was able to find Junkpiles pieces, whom he assures Doom will serve their needs.