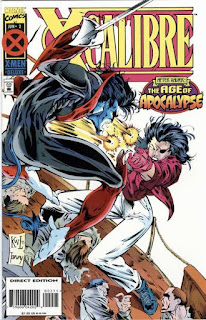 In a Nutshell
Nightcrawler runs afoul of a group of pirates led by Callisto on his way to Avalon.

Plot
As Destiny sees a vision of Avalon burning, the Madri attack the abandoned warehouse where the Infernal Gallop begins. Meanwhile, the submarine carrying Nightcrawler towards Avalon experiences technical difficulties, forcing it to surface and to hail a nearby cargo ship to save the refugees trapped inside. Nightcrawler, who teleported to the outside of the sub as soon as it surfaced, watches as the sub captain meets Callisto, captain of the cargo ship. Above, the Pale Riders are following Nightcrawler from the air, and Damask receives revised orders from Apocalypse to burn Avalon once she finds it. Later, with the submarine beyond repair, Callisto agrees to finish ferreting the refugees to Avalon, and transfers all of them into the ballast tanks of her ship in order to hide them from detection, first taking all their valuables to help their cover as a salvage operation. However, once in deeper waters, Callisto opens the ballast tanks, killing everyone inside. Enraged, Nightcrawler attacks Callisto's crew before confronting Callisto, but their standoff is interrupted by the arrival of Mystique, who tells Callisto to leave her son alone.

Firsts and Other Notables
The first page of the issue is a text recap/stage setting piece, the kind of thing that has become common in comics these days, but which was more sparingly used in 1995 - and which is unique to this issue, at least amongst the other #2 issues reviewed so far. 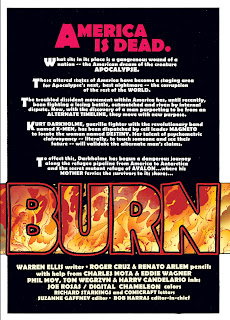 This issue marks the first Age of Apocalypse series to require a fill-in penciler (as well as a ton of inkers, though that’s not unusual); not surprisingly, the artist needing to be spelled is Ken Lashley, whose role as the regular artist on Excalibur gives Joe Madureira a run for his money in terms of stretching the definition of “regular artist” (Lashley will be back next issue).

Through the Looking Glass
Age of Apocalypse Callisto, who is not the Callisto-esque woman who fought Cyclops and the Elite Mutant Force alongside assorted AoA versions of Brotherhood of Evil Mutants members in Factor X #1, appears here, as the captain of salvage ship which fleeces refugees on the Infernal Gallop (basically doing all the stuff Mystique was accused of doing last issue). 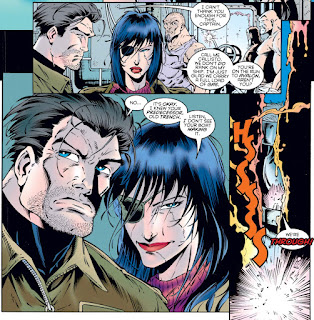 One of the refugees is wearing a Wolverine t-shirt, which simply makes no sense.

A Work in Progress
The Pale Riders’ mission is amended to not just locating Avalon, but destroying it. 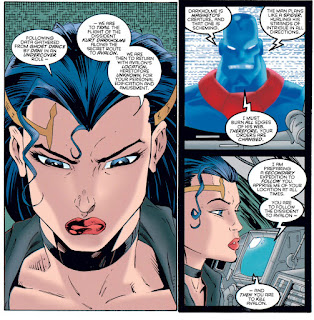 This prompts Damask to kill Moonstar in a rage, for reasons that will become clear in future issues. 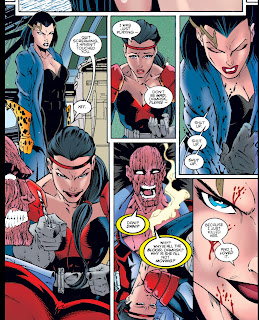 This issue reveals the “atrocity zones”, islands in the Atlantic where Apocalypse dumps bodies. 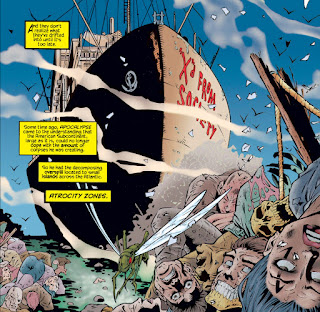 The Grim 'n' Gritty 90s
In a scene featuring from brilliantly 90s computer effects, Apocalypse demands Damask state her mission, just in case anyone might be listening who missed the previous issue. 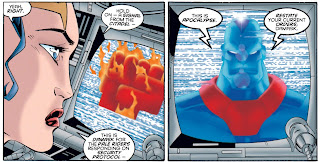 Austin's Analysis
Oof, this is dark. Poorly drawn (there are some rough pages in this one, and some exceptionally 90s computer-assisted images as well), but dark. All of the "Age of Apocalypse" books are, by and large, grim 'n' gritty in a way even the most 90s of the prime series never reach, but even by the event's standards, this is a grim issue: first, Nightcrawler and his traveling companion refugees nearly suffocate to death due to shoddy equipment, then they get promised safe passage, fleeced of all their valuables, and drowned, which prompts Nightcrawler to go on a killing spree of his own in retribution (and that's not even getting into the whole concept of "atrocity zones" overflowing with dead bodies). To varying extents, each series has done a pretty good job of selling the dystopic elements of this world so far, but by focusing on a small group of people, who seem on the verge of escaping to a better life not once but twice in the course of the issue, only to see them cruelly killed just when they thought they were safe, this sells the darkness of this world more effectively than any of the others (now, if only it looked like less of a rush job, artistically...).

Next Issue
Next week: Age of Apocalypse: The Chosen!