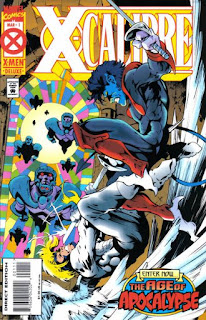 In a Nutshell
Nightcrawler heads to Antarctica to meet with his mother.

Plot
Nearing the end of the "infernal gallop", a mutant named Switchback is delivered to a massive monk named Cain. He proceeds to lead her through the freezing Antarctic to the tropical haven of Avalon. Meanwhile, in Manhattan, Nightcrawler meets with Angel, looking for travel arrangements to Antarctica in order to meet his mother, on Magneto's orders. Angel reluctantly directs him to a nearby warehouse and a man named Proudstar. Meanwhile, Magneto contacts Mystique, and asks her to help Nightcrawler enter Avalon & find Destiny, over Mystique's objections. Back in the city, Nightcrawler meets with Proudstar, who is none too pleased with the way Mystique extracts payment from the refugees he sends her way, but Nightcrawler defends his mother, then demands Proudstar get him to the antarctic. Unbeknownst to them, they are being watched by Danielle Moonstar, an agent of Apocalypse. Upon hearing her report, he sends her and the rest of the Pale Riders to follow Nightcrawler to Avalon. Later, as Nightcrawler leaves the city aboard a submarine, Switchback meets Destiny in Avalon, but when Destiny reads Switchback's future, all she sees is the apocalypse.

Firsts and Other Notables
The "Age of the Apocalypse" book with the laziest title change (it's the same title, just spelled differently!), this is the counterpart to Excalibur, and as such, it will focus on Nightcrawler (who, of course, is just one of the X-Men in this reality), and the mission he received from Magneto: the track down his mother, Mystique, and get her help to find Destiny. In the process, it will also deal with the human/mutant sanctuary of Avalon, located in the Savage Land.

This series centers in part on the "Infernal Gallop", a sort of Underground Railroad-type journey that ferries humans and mutants looking to escape Apocalypse's regime to the sanctuary of Avalon, a hidden community within the Savage Land. Nightcrawler departs on the first leg of the journey, in an attempt to reach his mother, in this issue. 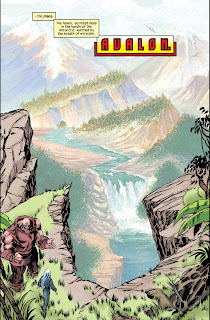 There's an odd moment in this issue, in which the Sentinels are shown on the title splash page flying through Manhattan. It's essentially an establishing shot of the apocalyptian city before zeroing in on the Heaven nightclub, but there's no reason for Sentinels to be there: it's a plot point in both Weapon X & Amazing X-Men that specific holes need to be created in Apocalypse's defenses to allow the Sentinels in, and once that's happened, they are all sent to New England for the human evacuation. And, of course, there's no reason Apocalypse would allow the mutant-hunting Sentinels to just fly around Manhattan. 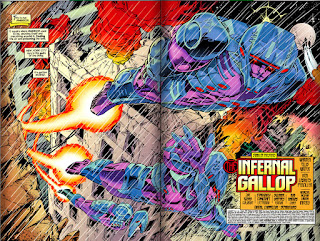 Switchback, a mutant with the ability to manipulate time to limited degrees who is the only surviving member of a larger group (including her boyfriend) to reach the end of the Infernal Gallop, makes her first appearance in this issue, and she will remain a recurring character in this series. She is an "Age of Apocalypse" original character, with no 616 counterpart. 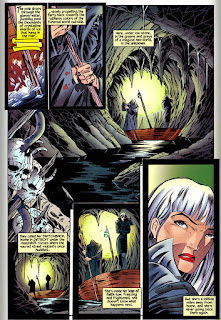 Through the Looking Glass
The opening pages of the issue introduce the AoA Juggernaut, who is now a monk named Cain working in service of Avalon. He is not wearing the Juggernaut armor, but is quite massive in size. 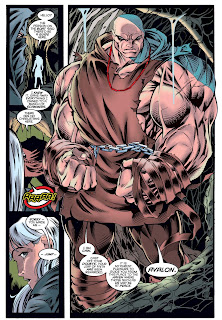 Nightcrawler’s last name is Darkholme, not Wagner, as he was actually raised by Mystique.

Mystique serves as a ferryman of sorts, helping shepherd people to Avalon, though Angel suggests her motivations are less than altruistic (something to which Nightcrawler takes offense). 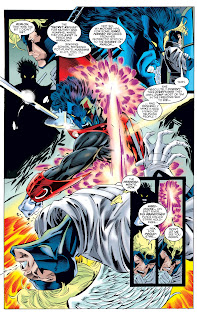 John Proudstar, who was the first casuality of the "All New, All Different" X-Men in the prime reality, helps set people in New York on the first step of the Infernal Gallop, a process which, in part, involves an American Indian Ghost Dance ritual.

The sub-boss for this series is the Pale Riders, a trio of mutants in the service of Apocalypse, sent to follow Nightcrawler to Avalon (and destroy it), consisting of the Age of Apocalypse versions of Danielle Moonstar, Deadpool (Old Man Wade) and a new character, Damask, whose prime counterpart will be introduced later in Warren Ellis' Excalibur run. 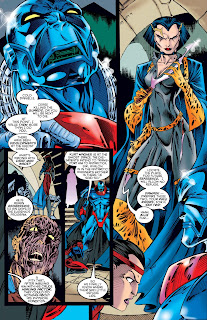 The Age of Apocalypse Destiny, the ultimate target of Nightcrawler's plot in this series, debuts. She is the sort of matriarch of Avalon, but is otherwise fairly close in demeanor to her prime counterpart (though lacking the cool mask). 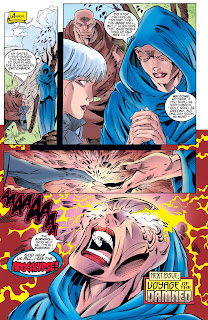 The Infernal Gallop begins in an abandoned Stark Warehouse.

The submarine taking Nightcrawler to Avalon is named “Excalibur”. 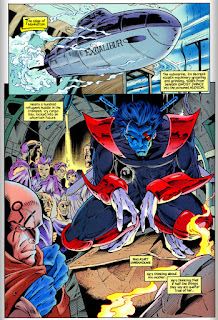 Austin's Analysis
In a lot of ways, X-Calibre is one of the more straightforward Age of Apocalypse series, at least in its first issue. The AoA Nightcrawler, his harder edge and winking dislike of religion aside, is not all that removed from the prime version. This issue follows a pretty standard plot setup, with Nightcrawler sent on a mission and carrying out the initial steps to make it happen, ending with him embarking on the first step of his journey. The most shocking moment comes when he teleports off one of Proudstar's fingers (an attempt to showcase that aforementioned harder edge), and the most intriguing element of this particular plotline, thus far, is the question of Mystique's morality in skimming her charges for delivering them to Avalon (and Nightcrawler's defense thereof), but otherwise, this is a pretty standard "start of a new plot" issue, one which, tweaks to the setting aside, wouldn't feel terribly out of place in the prime reality. Which isn't inherently a bad thing, but does make this series, at least at first, somewhat less attention-getting & memorable than its other AoA brethern.

Next Issue
Next week: Generation Next #1 and X-Man #1!