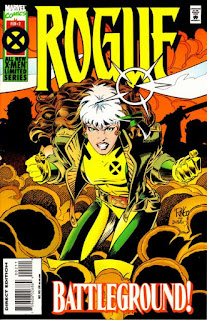 In a Nutshell
Rogue must defend herself & Gambit from attacks by Belladonna and the Assassins Guild.

Plot
Issue #1: On the anniversary of the first manifestation of Rogue's power, in which she inadvertently put her childhood sweetheart Cody into a coma, Rogue tells Gambit about the incident before departing for her annual pilgrimage to the hospital where he resides. Meanwhile, as Belladonna assumes leadership of the Assassin's Guild on the death of her father, she is approached by Candra, who offers to renew her pact with the Guilds. Bella says she'll consider it, then kidnaps Cody as revenge on Rogue for stealing her memories, telling Rogue she'll do the same to everyone she holds dear. Issue #2: Rogue is contacted by Tante Mattie, warning her that Belladonna has Cody and is targeting Rogue's loved ones. After she helps Gambit defeat a group of Assassins sent by Belladonna, she urges him to let her handle things on her own. But when he learns his ex-wife is behind the attacks, he follows Rogue to New Orleans. Arriving in the city, Rogue is swarmed by Assassins, as Belladonna tells Candra she'll renew the Guild's pact once her business with Rogue is concluded.

Issue #3: Rogue escapes the Assassins, but Gambit is captured and taken to Belladonna's home, where Cody & Tante Mattie are being held. Rogue fights her way inside to find Belladonna & Candra waiting. Candra, eager to speed things along, removes both Rogue & Belladonna's powers. No longer invulnerable, Belladonna is ultimately able to stab Rogue in the shoulder. Issue #4: Rogue manages to knockout Belladonna as Gambit frees himself and attacks Candra, who easily overpowers him. But Rogue, her powers returning, manages to defeat Candra. However, Cody is dying, and there is nothing to be done. Tante Mattie uses her power to allow Rogue into Cody's mind to say goodbye. Cody tells Rogue he's never blamed her for what happened, then passes on to the next life.

Firsts and Other Notables
Rogue's first solo miniseries (the line's last of 1994; it'll run into early '95 alongside the "Age of Apocalypse" issues) is essentially a sequel to the Gambit miniseries, written by the same writer, following up on threads introduced there, including the termination of the Guilds' relationship with the External Candra, and Rogue having absorbed Belladonna's memories while she was comatose in Gambit #3.

Art comes from a pre-breakout Mike Wieringo, following on from his work on X-Force Annual #3. He is inked by former longtime Uncanny X-Men inker Terry Austin.

Rogue's childhood friend Cody, who was put into a coma when he and Rogue kissed and her powers manifested for the first time, makes his first physical appearance in issue #1 (he had been previously mentioned in earlier issues), and then dies in issue #4.

Tante Mattie, from the Gambit miniseries, returns, and gets captured by Belladonna for daring to not want the comatose Cody to die. 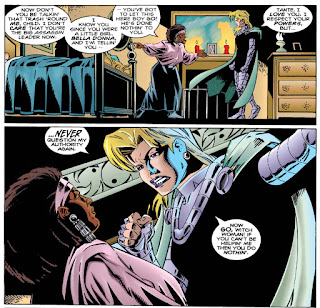 This series features the first appearances of a handful of Guild-centric characters who will pop up again later in Gambit's solo series, including Gambit's cousin and childhood friend Emil Lapin and Assassins Guild members Fifolet, Gris-Gris, Questa, and Singer. 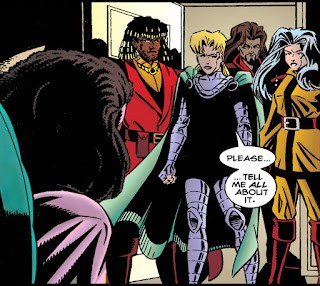 Like the contemporaneous Bishop limited series, the first issue of this series has a foil-enhanced, cardstock cover.

The Chronology Corner
This story takes place just before "Legion Quest" (specifically, between Uncanny #319 and X-Men #40 for Rogue, and between X-Men #38 and #40 for Gambit), with Candra appearing here following her encounter with Storm, Gambit & Phoenix in X-Men Unlimited #7.

A Work in Progress
Rogue & Gambit meet at Harry’s Hideaway, where Rogue tells Gambit about the first manifestation of her power, when she put her boyfriend Cody into a coma (first mentioned in Uncanny X-Men #185). 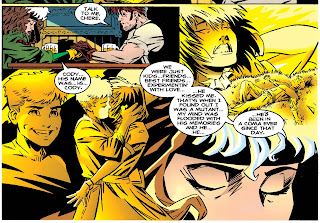 Storm & Gambit’s time together, when Storm was de-aged, gets a rare reference here (and an even rarer footnote to it). 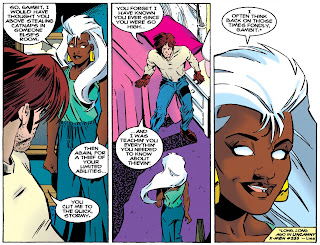 It’s said that each of the Assassins has received their power from Candra. 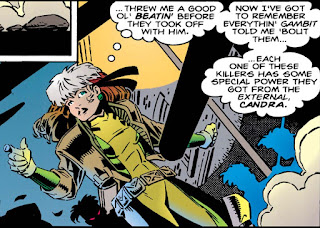 Rogue meets Cody’s spirit shortly before he dies, and he’s surprisingly cool about the whole situation. 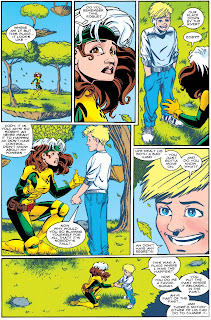 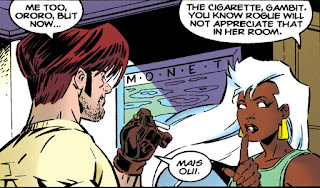 Young Love
Gambit continues to have a hard time taking no for an answer. 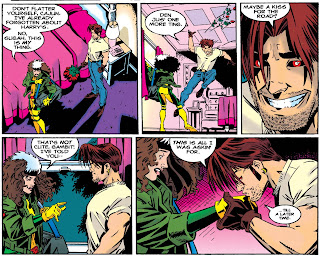 Human/Mutant Relations
Belladonna derogatorily refers to Rogue as “Mutie ” throughout the series, despite being a mutant herself (unless the whole "Assassins got their powers from Candra" is meant to suggest they're not actually mutants, but if so, that needs to be made more clear). 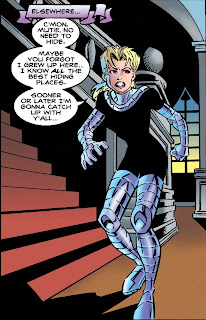 Austin's Analysis
Rogue's name may be on the cover, but this is very much a sequel to the previous year's Gambit miniseries, picking up in the wake of the power shift between the New Orleans' Guilds & Candra and Belladonna's ascension to leadership of the Assassin's Guild (as well as Rogue's absorption of her memories in that series) and bringing back pretty much all the same players, thereby filling the pages of this series with the same sort of guild nonsense and goofily-dressed assassins as permeated the Gambit mini. To Mackie's credit, despite this being principally a Gambit story (or at least a story borrowing his trappings), he does a pretty decent job of keeping Rogue as the central figure in a story that isn't really about her; she never becomes a damsel-in-distress and Belladonna's singular rage at Rogue (which prompts her to target Rogue's childhood sweetheart Cody) helps keep Rogue as the focus even while Candra's Guild-related machinations swirl around her.

Still, given how many potential avenues there are for Rogue stories to explore (her relationship with Mystique, her past as a villain, her now-relative experience as a superhero), it's a shame that her first solo outing gets used to further Mackie's bizarre fascination with the lamer parts of her boyfriend's backstory. As with Lee Week's moody art on the Gambit mini, the Wieringo/Austin art here helps elevate this somewhat (even if Wieringo isn't quite up to his later form yet, with his more cartoony style highlighting, rather than underplaying, some of the more visually-outlandish character looks), but it's still hard to muster much enthusiasm for a series that is ultimately a watered-down sequel to a story that wasn't that great to begin with.

Next Issue
Next week: the hunt for Penance continues in Generation X #3 and Cable comes face-to-face with his son in Cable #19!