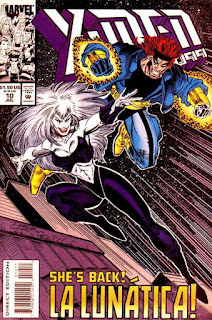 In a Nutshell
La Lunatica Returns as Xi'an leaves the X-Men.

Plot
Xi'an gloats over the fallen Zhao, then storms out of complex, telling the X-Men he doesn't need any of them. Meanwhile, Bloodhawk arrives in the Savage Land. In Mexico, La Lunatica escapes from a Circuit-Skips sent after her by the Theatre of Pain, while Fitz catches up to Xi'an, who wants to tag along as Xi'an goes over the edge. Inside Zhao's complex, the X-Men help Frostbite put her teammates in a cryogenic freeze to hopefully stop their genetic deterioration, while the Driver returns to his base with the mutant he rescued, only to zap him with a beam of light. Elsewhere, Xi'an & Fitz stop at a roadhouse. Xi'an, still looking to find the Driver, now so he can locate other mutants to serve as his muscle, is looking to call in a favor, but Fitz spots Lunatica amongst the crowd. He chases her outside and the two fight until Lunatica gets the drop on Fitz, then kisses him. She tells him to stop holding back and to let the fire inside him rage, and he gladly agrees, calling himself her man.